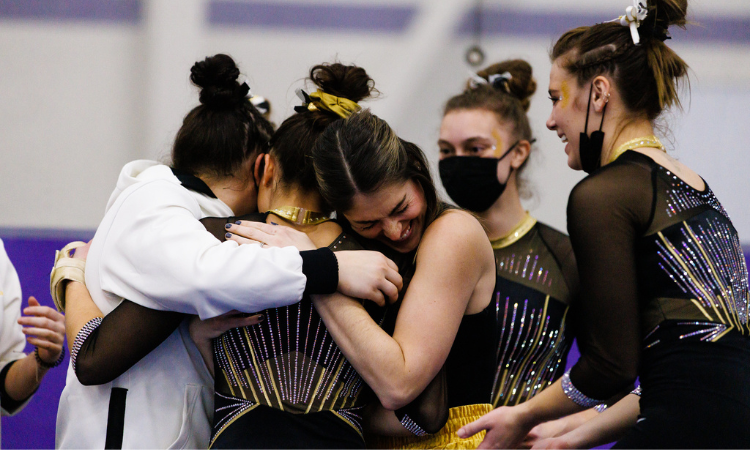 According to the Women’s Collegiate Gymnastics Association, “The Collegiate Gymnastics Growth Initiative (CGGI) was formed to promote awareness in the pursuit and addition of new women’s collegiate gymnastics programs across the country, thus providing more opportunities for college bound gymnasts.” Thanks to this task force’s efforts, there are new women’s collegiate programs being added to the NCAA for the first time since Lindenwood gymnastics was announced in December 2011.

The teams to be added in the next two seasons will compete at all three divisional levels. However, it should be noted that the majority of these teams, Greenville, Simpson and Utica, will be classified as DIIl. Moreover, the lack of athletic scholarships in Division III makes adding gymnastics fiscally more realistic and an easier ask for athletic departments. Don’t be surprised if the trend of adding programs at this level continues.

Currently, the majority of DIII teams, excluding Centenary, compete within the NCGA. There are 14 NCGA teams, separated into two conferences: NCGA-East and WIAC. The conferences also correspond with the regional divide for postseason action, meaning conference championships double as regionals. What will be the long-term repercussions of the current DIII competitive system in relation to the CGGI’s efforts?

Will new DIII conferences be formed?

Currently, there are eight teams in the WIAC and six teams in the NCGA-East. While Utica logically will be added to the East due to its proximity, Simpson and Greenville are 248 and 312 miles away from the nearest WIAC competitor, respectively. Distance between schools is a huge consideration when including new conference foes due to the need to drive to meets to reduce travel expenses. Moreover, many DIII schools have weekday meets on their schedules, a feat that’s less feasible without the convenience of a short bus ride.

The NCGA is also known for its marathon-long conference meets. Each meet is only a single session, which means two bye rotations in the East and FOUR in the West. Adding more teams to the WIAC would constitute a change to the postseason procedure, one way or another. Either the teams will have to be split into two sessions, or a new conference will have to be formed with the teams outside of Wisconsin and/or Minnesota.

Either choice would have a domino effect of its own, changing the way teams qualify to nationals. Currently, the top three teams from each of the two regions automatically qualify. Adding a third DIII conference could change the number of automatic qualifiers per region while having multiple sessions in the West could dip into afternoon-versus-evening-session bias.

Needless to say, whatever decision is made will cause growing pains in the short term, but some sort of change will likely need to be made for long-term success and sustainability of DIII gymnastics growth.

All signs are pointing toward Utica joining the NCGA-East for the 2024 season. However, Greenville and Simpson both have yet to find homes in any particular conference for their inaugural seasons in 2023. While Greenville indicated that the team was pursuing a place within the WIAC, currently there is no official decision. Moreover, Centenary has inquired about joining DIII conferences since transitioning from Division I in 2012, to no avail.

Centenary competes within the Midwest Independent conference as the only DIII member. With the dissolution of UIC’s gymnastics team after the 2019 season, there are only five current members of the MIC. There’s wiggle room for growth there.

Moreover, Winona State, a current WIAC affiliate program, was also a member of the MIC in the early 2000s. This leaves open the possibility of transitioning to an NCGA conference further down the road without forfeiting all postseason competition in the short term.

However, one also must consider that the MIC is a conference run by the coaching staff of each program, adding another layer of administrative burden. Is this something that a new program with a new coaching staff is willing and able to tackle? There’s also the prospect of travel expenses to Texas or Louisiana, although this would only be necessary once every few years.

Will schools outside of the Northeast and Midwest be allowed to join DIII gymnastics?

Included below is a map of the locations of all NCGA teams, as well as the three new teams for 2023 and 2024. As you can see, the majority are clumped into two geographical regions. This serves for ease of travel and schedule creation. However, there are 442 Division III schools across 34 states, any of which could be receiving information from the CGGI about starting a new program. It was previously mentioned that the only other DIII school in Louisiana is currently not competing within the NCGA system due to logistics. Will this continue to be a barrier to the expansion of programs? Or will gymnastics evolve to accommodate the increasing opportunities for college athletics? 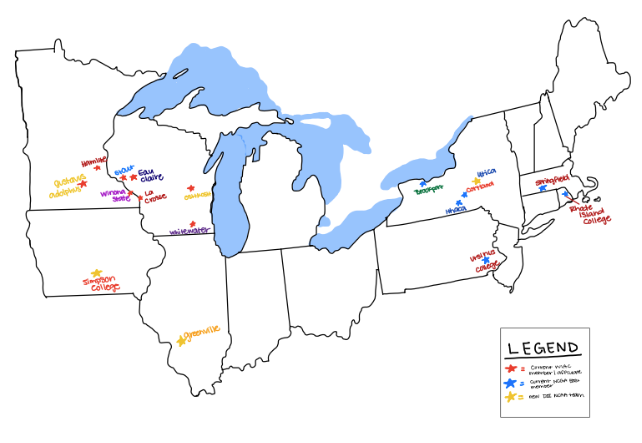 Will there be a transition from SAS to NQS to match the rest of the NCAA?

The NCGA is the only place within NCAA competition that uses the SAS system to rank teams and individual performers throughout the season. Per Morgan Bradford’s article Explaining the Differences of Division III Gymnastics, “The [Season Average Score] is an average of four scores, with one score coming from an away meet and no more than one meet coming from a DI/DII or non-conference meet.”

While the purpose of having an equation specifically tailored for the needs of DIII is understandable, if more schools are being forced to compete without a conference or in an independent one, the SAS becomes a bit trickier to manage. While it’s a long shot to assume that the NCGA will suddenly switch to the National Qualifying Score system to align with the rest of the country, it would make things a bit less confusing for fans. In addition, it would allow for a more apples-to-apples comparison when looking at scores and consistency across all three divisions.

One example of the impact of competing in an independent conference was the introduction of regular season All-American honors at the DIII level in 2020. Centenary was arbitrarily classified with the NCGA-East to determine award winners, capturing four of the 10 possible honors. Is it technically “fair” for teams competing outside of NCGA competition to be reclassified for postseason awards and given an SAS? This problem would only become more prevalent when two more teams join Centenary’s ranks come January.

What is the longevity of the CGGI?

How long will this growth initiative be sustainable? Obviously, the task force was able to capitalize on the increased popularity of gymnastics following the 2021 Olympics. However, it takes big money to start new programs. Via the WCGA website, “We provide information, financial aid (including set up costs, budgetary help and facility use) and presentations to athletics department administrators and university presidents to consider the option of adding women’s collegiate gymnastics to its university.”

Moreover, WCGA’s ultimate goal includes, “constantly pursuing enough money to have an endowment account to provide funds for new programs sponsoring collegiate women’s gymnastics.” While we love the spirit, we’re also seeing a lot of dollar signs. The fear is that there will be temporary programs who are unable to sustain their budgets once monetary assistance from the WCGA runs out.

The Collegiate Growth Initiative is the latest trend in the rapidly evolving sport of college gymnastics. While it’s exciting to have new teams competing nationwide, it would be remiss to ignore the growing pain that’s likely to ensue. There are logistical aspects of creating a new program that fly under the radar in the midst of the excitement of expansion. While we’re hoping for the best, we can’t wait to see how some of these questions are answered throughout the coming months and years. If one thing’s certain, it’s that collegiate gymnastics is ever-changing. We just hope it’s growing in the right direction.