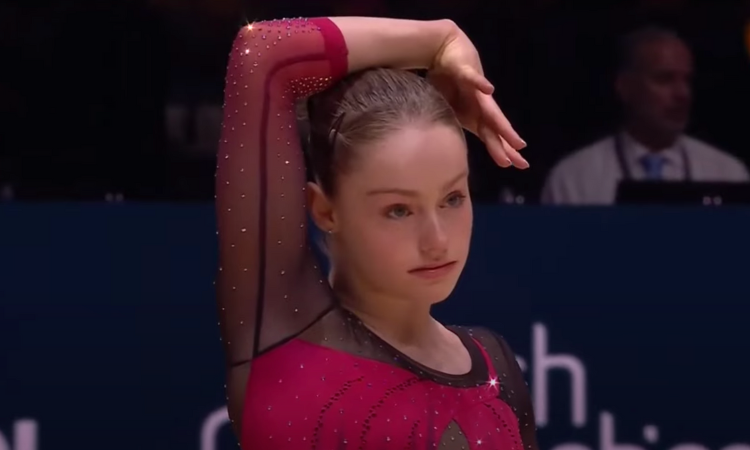 Unless you’re Simone Biles, any gymnast is underrated in one way or another. With the signing period for the class of 2023 rapidly approaching, we want to shine a light on some of the recruits who might not be on your radar just yet. This may be because they are very accomplished gymnasts who are underdogs on a team of stars, are athletes who are less spoken about as they are committed to lesser known teams or excel on only one event.

While Turner comes in at a very respectable four stars, the Iowa commit just helped Team Canada to its first-ever world championships team medal, competing on bars, beam and floor in the final. Her triple full and in-bars will be huge assets for the Hawkeyes.

Speaking of worlds performances, Tanskanen competed in Liverpool for Finland. She won the Finnish national floor title in June and competes two vaults internationally. She heads to Missouri next year.

True, who is still uncommitted, has an extremely clean and flared Yurchenko full and boasts a perfect 10 on vault in level 10. She’s also a solid floor worker. If she can learn to stick her vault, she could be a lineup staple for almost any team.

If you’re looking for a recruit with college floor star written all over her, look no further than Turner. Her tumbling needs a touch of finesse, but her performance quality and presentation will fit well on the SEC stage when she joins the Gymdogs.

Western Michigan is bringing in a bars star in Samuelson. Her patient work and clean lines will shine on the college stage. She’ll be an asset on beam as well, where she competes a front aerial to back handspring layout step-out layout step-out—yep, a quad series.

West is a fierce competitor, capable of difficult skills and combinations on all events. She boasts a career high 9.825 on bars and is training a Yurchenko 1.5 on vault.

UC Davis will be delighted to add Oshiro to its beam lineup. Her work there is exquisite and very difficult—her routine includes a standing layout step-out and a switch ring.

READ THIS NEXT: Glowups in the Class of 2023 Recruit Ratings