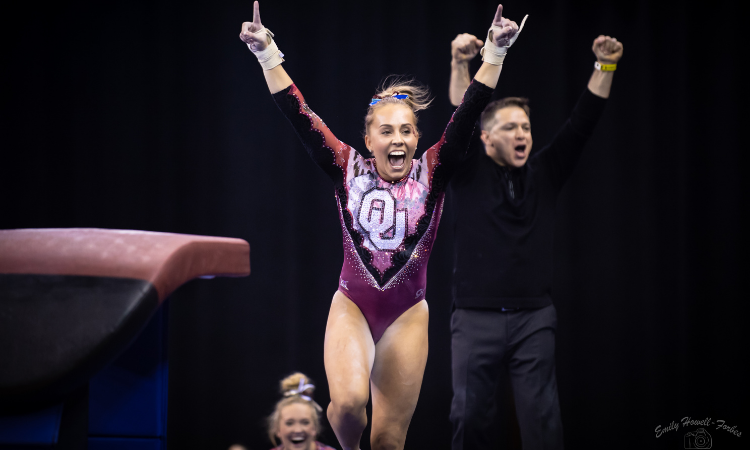 It’s regional final time! Two bids to nationals are on the line here in Norman, Oklahoma, with the top two teams from each of Thursday’s round two sessions vying for those sacred spots. With no individual gymnasts competing and no scores carrying over from any previous competitions, everything hinges on tonight’s results.

Oklahoma will enjoy an “easy” path to nationals, posting the top team total of any program in any regional on Thursday to nab great momentum and also have the huge added benefit of competing in front of a home crowd. The Sooners haven’t placed lower than third at nationals for a decade, and I don’t expect today’s results to change that course they seem to be on once again. For Oklahoma, today will be about finalizing lineups heading for nationals in a few weeks and making sure it has at least an “average” day (by Sooner standards) to earn that spot.

Minnesota was able to advance to the regional final, as expected, but posted a score on Thursday that raised some eyebrows. The Gophers put up the fourth highest score in any regional round two session, and now carry momentum and added expectations to defeat the closely ranked Golden Bears to earn a spot to nationals. Their big trio – Lexy Ramler, Ona Loper, Mya Hooten – performed outstandingly, per usual, and will once again need their supporting cast to step up in order to make a return trip to Fort Worth. Hitting beam for the second meet in a row will be Minnesota’s biggest key today.

California also fulfilled expectations of making today’s regional final, but it wasn’t without a mini scare after a slow start on vault and a leadoff floor fall adding pressure to its final rotation on Thursday. By ranking and Thursday’s performance the Golden Bears enter today as an underdog, and will need to be nearly flawless to advance should Minnesota also have a good meet. Vault is an area of concern with significantly less difficulty than the pair of favorites in this meet, meaning landings will need to be stuck. California opens on its best event, bars, and coming out of the first rotation on top of Minnesota is going to be the its key if it hopes to put the pressure on and snag a nationals spot for the second year in a row.

After scoring an upset over seeded Arizona State to be here tonight, Arkansas enters this final as a major underdog. However, that role has proven dangerous many times in many sports, meaning if the Razorbacks can put together a good meet, they should remain somewhat in contention throughout the meet. Hitting bars was critical for Arkansas on Thursday, and maximizing scoring there again will be key, as will landings on vault and eliminating wobbles on beam. Arkansas, unfortunately, has an injury situation to deal with, as outstanding freshman Leah Smith tweaked something on floor and was held out of the vault lineup Thursday. Her injury status and potential loss of scoring potential is a storyline to keep an eye on for the Razorbacks tonight.

Gerdes (Minn): FTY. Good block and distance, tries to hang on to the stick but slides back. 9.800

Perea (Cal): Gets underway with on the high bar with a nice first handstand, pak, lovely, toe on, Maloney half, no issues, great last handstand, dismounts double layout, small shuffle back. 9.850

DeSouza (Cal): Nice handstand to open on the high bar, giant half to piked Jager, caught close but gets through to the overshoot, dismounts FTDT, step back. 9.775

A fall from Arkansas in the leadoff.

Quarles (Minn): Y1.5. Phenomenal distance despite being back on the table on the block, stuck cold! 9.975

Bordas (Cal): Starts on the high bar with a good handstand, giant half to Jager to overshoot, caught very close with bent arms, dismounts giant full double tuck, arm waves and big bend to save the stick. 9.850

Schank (Cal): Gets underway on the high bar, giant half to piked Jager to overshoot, lose a little swing in the middle, dismounts double layout and sticks. 9.800

The Sooners take the lead to start things off! Oklahoma almost looked like a carbon copy of Thursday’s opening rotation performance, and I’m sure it would love to repeat that 198.175 ending total as well. Minnesota nailed landings on vault and are pushing the Sooners through one, and will be in a prime position if it can continue to hang around them all night. Arkansas opened up with a fall, but did a nice job of remaining calm and hitting five for five to stay in the race. California isn’t out of it yet, but definitely needed to get more tenths out of its best event. The Golden Bears will likely be fighting from behind the rest of the afternoon.

Hooten (Minn): Mounts to the high bar, nice first handstand, giant half to piked Jager to overshoot, good extension in the catch, good handstand, dismounts FTDT and hangs on for the stick. 9.800

Ramler (Minn): Amazing Maloney to pak, Maloney half just as nice, great handstands, dismounts FTDT and squats for the stick. 9.875

Lovett (Ark): Nice opening double layout, perfect landing into the lunge, double tuck, great height, drops out of it, switch half to Popa, bouncy in a good way, closes with a front layout front full, dances right into her end pose. 9.925

It’s a close one! Oklahoma continues to cruise and nailed vault as expected, but California and Arkansas were able to make up ground on Minnesota. The Gophers didn’t reach their full potential on bars where they’re usual able to build leads, while Arkansas and California both performed well enough to cut into the lead and make things much more interesting. All eyes will be on Minnesota here to see if it can hit beam two meets in a row, which is crucial in this meet.

Gerdes (Minn): Starts with a front aerial, nice, BHS LOSO, wobbly steps back but stays on, lean on the full turn, split jump to double stag, side aerial layout full. 9.825

Perea (Cal): Up instead of DeSouza who fell yesterday, nice RO double pike to open, slow double wolf turn but gets it around, switch half to wolf jump full, BHS front full front layout to close. 9.900

Fall from Smith (OU) on bars. On vault, the Razorbacks opted to not have Smith (Ark) go.

Quinn (Cal): Starts off with a front layout to Rudi, nice landing, switch side to Popa to wolf jump, done well, closes with a double pike, great. 9.900

So close heading into the final rotation! Oklahoma would need a disaster at this point not to advance, so all it needs to do is stay on beam five times. Despite barely trailing second place, Minnesota actually has the upper-hand heading into the final rotation as it ends on its best event (floor, where it ranks second in the nation), while California is rotation to its worst (vault). The Golden Bears must stick today without much difficulty in start values to have any chance, while the Gophers just need to be normal on floor. Arkansas vault pretty much has it on the outside looking in now. While the Razorbacks can put up some big totals on bars, the other teams would need to likely mess-up for them to be able to make up the difference even with a massive number.

Gerdes (Minn): Mounts with a front tuck through to double tuck, slides back a bit, switch ring to split full, bouncy, closes with a double pike, nice landing. 9.850

Oklahoma is hitting on beam and Arkansas is hitting bars. Focusing on the closer battle until California is done with vault.

Loper (Minn): Mounts with front layout to Rudi, a tiny bit of leg separation in the twist at the end, switch ring to tour jete half, RO BHS 2.5, controlled lunge, ends with a RO 1.5 front layout.

Hooten (Minn): Massive full-in to open up, switch side to Popa, everything so great so far, FHS front full front pike, no problems, CROWD IS GOING WILD but maybe for Smiths score, absolutely drops out of the double tuck. 9.975

Both Oklahoma and Minnesota put out two great competitions this weekend, and have earned their spots at nationals! While California held qualifying position heading into the final event, it wasn’t able to overcome its weakest event while the Gophers cruised on floor. All around, it was a great weekend of competition! Congrats to all the qualifying teams and individuals!