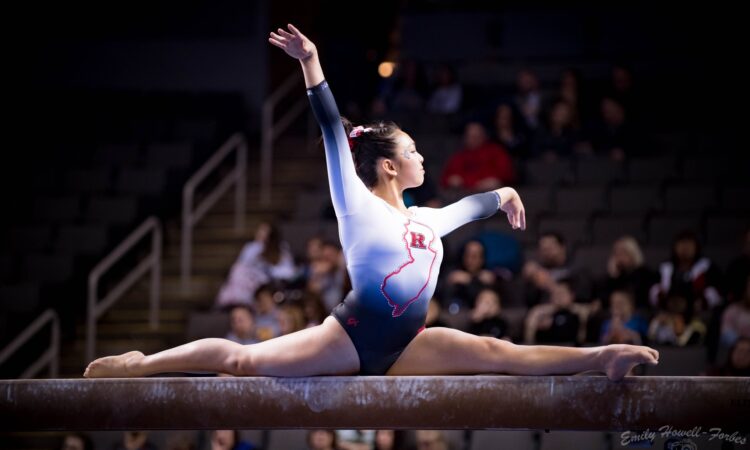 This might not be the closest quad meet of all time, but it might be one of the more independently interesting. Florida delivered its first 198+ road score of the season last week at Auburn and could debut at No. 1 tonight with a 198.150 and a sub-NQS result from Oklahoma. N.C. State took a hit after a season-ending injury to star Chloe Negrete, but has showed a great deal of resilience to continue improving in the later part of the season. Rutgers’ season has been an exercise in consistency, but the Scarlet Knights have yet to crack 196 and doing so would be a major sentimental victory. Finally, Penn has delivered a number of program records this year and is still in line for its best team finish since at least 1998, but the Quakers have had a difficult couple of weeks with a surprising loss at the Ivy Classic followed by a COVID cancellation. We’ll be tracking a lot of different narratives through this one.

Clapper (UF): We didn’t see the first pass, one and a half to front lay. Switch side to Popa, OOB on the last pass. 9.75

Belkoff (Penn): Triple series, big check. Split to sheep. One and a half twist dismount stuck. 9.625

Richards (UF): Double layout, little hop in place to avoid OOB, one and a half front lay with a scoot forward. 9.85

Lashley (Penn): BHS LOSO steady, full turn. Feels like it’s been awhile since I’ve seen her in lineups! Switch to split 3/4, beat to side aerial with an adjustment, one and a half twist with a step back. 9.65

Rutherford (NCSU): Bounce in place on another good FTY. 9.75

DeBarberie (Penn): BHS LOSO great, lovely straight legs as always, split to straddle half very solid. Side aerial, cut away and we didn’t see the end. 9.75

Lehman (NCSU): Yurchenko arabian a touch short with a medium step back. 9.6

Pringle (RU): Blind to pike Jaeger, great, a little short on her bail. Pikey double layout with a step forward. 9.8

Shepard (NCSU): FTY big but with bits of form throughout, nearly stuck. 9.825

Baumann (UF): One and a half front full great, L turn, a little front foot bounce on the double pike. 9.875

Joyner (RU): Blind to Jaeger, maybe a touch flat footed, leg sep on the bail, double layout with legs apart and a step back. 9.775

C. Marr (Penn): BHS LOSO, fall. Switch straddle quarter, something to gainer full off the side. 9.125

Balser (RU): Blind to Jaeger aggressive, a little leg sep on the Pak, FTDLO with closed hips and soft knees but well landed, just a hop. 9.75

Wong (UF): Best landing on the triple she’s done in college, tour jete half split full. Whip half front full, great control again, MAYBE walks out of the double pike a little fast but I wouldn’t take it, she got it to lunge before going anywhere. Ten hands from the team, I’m fine with it, 9.975 will have to do for today.

S. Kenefick (Penn): Commentators are so lost on these names but don’t worry Penn, I got you. Triple series, little check. Beat to straddle 3/4, one and a half twist with a hop forward.

Reed (UF): Got a MASSIVE cheer and she’s not even at home. Overcooked double layout, scoots the front foot, Front lay to Rudi is great, switch half wolf full, nailed the double pike. 9.9

Slightly stingy scoring all around there, with the home team maybe getting the worst of it on vault. Rutgers should be perhaps the happiest, getting through a sometimes-challenging event fine and setting up to keep growing on beam. Florida did well for a depth meet, while Penn had to count a fall on beam.

Robinson (NCSU): Blind to Jaeger, bit of feet, blind full double back with a little step. 9.75

Merchant (NCSU): Maloney to Pak with leg sep, struggles a bit on the low bar but gets the pirouette over in the end, double lay with a baby hop. 9.775

Ortega (NCSU): Hindorff great, not sure if the bail quite made handstand, double layout with legs together and a hop back.

Thomas (UF): Looked like another small hop forward to me on her one and a half but can definitely improve on the 9.85s earlier in the lineups. Yeah, 9.9 is about right.

Shepard (NCSU): Great blind to Jaeger, she’s so tidy on bars, looks like she hit her feet on the floor under her Pak. Had to cast twice on the low bar but kept it loving, FTDB with chest down, little hop. 9.5 🙁

Great Florida vault rotation and the Gators are on 198 pace once again without using their full depth or showing their very best landings. Leanne Wong definitely looks as good as she ever has today, and at the end of the day a just-okay Nya Reed is still a very very good gymnast.

Rutgers had a great beam rotation there and Penn excelled on floor while NC State kept it moving on bars but really could have used a good score from Shepard.

Blakely (UF): Maloney to Pak, touch of leg sep in the maloney but gets them back together on the Pak, toe blind with a leg flicker to front giant to double front, step back. 9.825

McCusker (UF): Maloney to Pak, great van Leeuwen, tiny arch on the high bar handstand, stalder double back deep with a hop back. 9.825

Schoenherr (UF): Toe blind to Jaeger the usual high, gorgeous, great turnover. Good bail, blind double front half stuck, looked like one of her ankles tried to collapse on her as she landed but she brazened it out. 9.9

Shepard (NCSU): Switch straddle quarter, BHS LOSO emphatic. Side aerial, beat to straddle half with a little check, side aerial back full stuck. 9.9!

Webb (NCSU): BHS LOSO, switch split, super steady. Front aerial looked like it might be short on rotation but made it, beat to messy sheep, side aerial back full stuck. 9.85

Another great bars rotation at the end from Florida. These judges seem pretty determined not to give any 10s. Rutgers continued to shine on floor and is on pace for a season high.

Merchant (NCSU): Missed the first pass but it was fine, one and a half front lay with a little extra bounce in the step out. Borderline OOB in the last pass. 9.825

Blakely (UF): We were offscreen for her acro series, switch switch half super steady, side aerial back full with maybe a little scoot into the salute. 9.925!

Baumann (UF): Big break on the BHS LOSO, full turn, one and a half dismount solid but Florida will want to drop that one either way. 9.65

Leese (RU): Medium hop forward on her one and a half.

In this rotation the stream has gotten worse at including all the routines so sorry if this is getting choppier.

Clapper (UF): BHS LOSO LOSO, wow, major break in the middle and not sure how she survived the series but she did. Side aerial back full with a little shuffle.

McCusker (UF): Needs a 9.875 to deliver another 198 for the Gators. Double wolf turn great, front aerial, lovely snappy dance. BHS LOSO with a small check. Switch to split, side aerial tuck back full with a hop back. 9.85

Career day for Leanne Wong, who walks away with four titles and a tie for the top AA score of the year. It’s a day of highs and lows for Rutgers, which set a program record but also was mathematically eliminated from regionals due to the work of other teams. N.C. State and Penn were both able to make incremental progress on their NQS with solid, if not perfect, meets tonight.