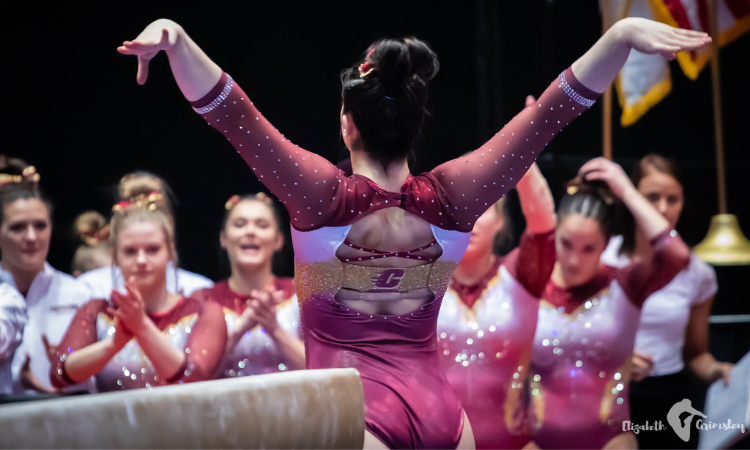 With two weeks left in the regular season, the postseason field is beginning to take shape. Oregon State and Arkansas finally reached enough scores to calculate an NQS, meaning every team capable of figuring into the regionals discussion is now ranked.

Let’s start with the teams not on the bubble. Here are the projected regionals placements if the current standings were to hold.

Auburn and Oregon State win their tiebreakers (over Alabama and Michigan State, respectively) by virtue of having the higher scores remaining once all scores counting toward NQS calculation are removed.

The following teams would then be distributed to the four regionals according to some combination of geographical and conference criteria that only makes sense to the committee that decides these things, with teams in the bottom two rows participating in the first round “play in” (though last year the No. 26 team was inexplicably forced to compete in the first round, so take that with a grain of salt):

This week we’ll assume that every team currently ranked No. 28 or higher is a lock to make regionals, so we’ll examine the scoring outlook and qualification scenarios for teams ranked No. 29 to No. 43. Scores in bold can no longer be replaced, and crossed out scores are the current season high (which does not factor into NQS). Scores with an asterisk are replaceable this coming weekend. If a team has two meets this weekend, the max NQS is calculated using its current season high for both meets.

San Jose State continued its hot streak with its third 196-plus in a row last weekend, though other teams’ successes meant that it still dropped in the rankings. Still, if the Spartans can keep that streak alive, they should have no problem remaining in the regionals field.

Like SJSU, Towson has been better in the second half of the season, though it has had some high-195 scores mixed in with the 196-plus performances. It feels unlikely that the Tigers will fall out of regionals contention at this point, but another mid-196 would make things a little more comfortable.

Washington’s season high of 197.275 is higher than that of any other team ranked 18th or lower and yet the Huskies find themselves at No. 31 due to inconsistency. One sub-196 score is already locked in and can no longer be replaced, and the other one can’t be replaced until the Pac-12 championship on March 19. A 197-plus score at home this weekend would certainly make things more comfortable, but otherwise it’s going to be a nail-biter end of the season.

Southern Utah’s situation is remarkably similar to Washington’s: A 197-plus season high, a locked-in sub-196 score and a low-195 road still to drop with a home meet on deck this weekend. However, the margin between SUU’s season high and the score that can be replaced this weekend is lower, meaning that the Thunderbirds can’t improve their NQS all that much this week. Last week’s 194.425 performance at Penn State was a missed opportunity to drop the 195.550, so SUU needs to be laser focused on the MRGC championship in order to remain in the regionals field.

West Virginia has been extremely consistent this season, with the last eight meets all scoring in the mid-195 to mid-196 range. Unfortunately, that might not be enough to make the regionals field this year. Six of the seven teams below the Mountaineers in the rankings have higher season highs, meaning they are more capable of improving their NQS this weekend. WVU needs to break out of its consistent scoring range and set a new season high to stay in the conversation.

North Carolina took care of business last week, moving into the regionals field with a 196.475 road score despite star freshman Lali Dekanoidze being out with injury. However, the Tar Heels can’t breathe a sigh of relief yet, with two sub-196 scores to drop and two opportunities left to replace them. There are seven teams capable of passing UNC in the rankings this weekend, so the bubble is a precarious place to be.

Arizona is the only team on this list with three meets left, including a double meet (1 road, 1 home) this weekend. That gives more opportunity to increase its NQS and move up the rankings, but repeating that season high performance multiple times in the remaining meets is going to be a tough ask when the Wildcats have barely cracked 196 on the road this year. Still, the opportunity is there for the taking, starting with the home meet against Sac State tomorrow.

This is where the bubble starts to get even more interesting because every team ranked No. 37 through No. 43 is capable of rising to at least No. 36 this weekend. This means that Western Michigan needs to increase its scores to fight off all the other teams. Last week’s 196.675 road performance was a great place to start, but even a repeat showing this week would only move the Broncos up to a maximum ranking of No. 32. WMU needs to take care of business but also hope that the lower-ranked teams falter.

Pittsburgh is already counting two sub-196 scores, but it also has the highest season high of any team currently outside the bubble. The Panthers likely need two scores in the mid-196 range in order to make regionals.

Nebraska can now no longer drop a 195.625 after its 194.925 performance at home last weekend, a big blow to its chances at making regionals. However, the other locked-in scores are decent, so with season-high performances in its remaining two meets, a regionals berth would remain possible.

Penn State’s regionals chances are looking grim, with the team seemingly unable to surpass the mid-196 hump. However, repeating their season high in each of the last two meets would keep the Nittany Lions in the conversation.

With a 194.650 still to drop and no sub-196 scores locked in, Central Michigan has the best opportunity to move up this rankings this weekend out of any team currently outside the bubble. The Chippewas are on a hot streak, scoring 196-plus in the last four weeks after starting the season with four sub-195s. If that streak can be maintained through the last two meets, this team should be at regionals.

Kent State’s situation is very similar to Penn State’s with one sub-196 score locked in and two more left to drop, but with the lower current ranking, the chances are even slimmer unless the Golden Flashes can put up two season high scores in their remaining meets.

UC Davis can technically move into the regionals field with a season high this week, but that would require a lot of help from higher-ranked teams. With the lowest season high of any team on this list, the Aggies’ likelihood of making regionals is very low.

Like UC Davis, Temple is mathematically capable of moving up to 36th this week, but it is unlikely, especially with only one 196-plus score on its resume this entire season.

If regionals were to start tomorrow, the following gymnasts would qualify as all-arounders (assuming teams ranked Nos. 29-36 are allocated to the play-in round):

On the outside looking in: Emily Mueller (Arizona; 39.160), Rachel Decavitch (Kent State; 39.160), Kendra Combs (West Virginia; 39.145), Jaudai Lopes (San Jose State; 39.140), Emma Spence (Nebraska; 39.135). The most likely of these to qualify is Spence, who has a season high of 39.375 and still has a 38.875 to drop. Penn State’s Lauren Bridgens has an outside chance at qualifying as well if she can drop two mid-38 scores in her final two meets. Of the currently projected qualifiers, Knower is most in danger of falling out of qualifying position as she has the smallest range among her counting scores with no low scores left to drop. Dekanoidze is injured, so it is likely she will be passed in the rankings.

On the outside looking in: Julianna Roland (Temple; 9.845), Jaudai Lopes (San Jose State; 9.845), Taylor Jensen (Bowling Green; 9.840), Victoria Henry (Ball State; 9.840), Lauren Bolen (Towson; 9.840), Sarah Moravansky (Western Michigan; 9.840). Roland and Lopes lost out on the nine-way tiebreaker for the last seven spots, but they each have 9.800s to drop so could easily move into qualifying position over their remaining meets. Moravansky is the most likely to move up out of the 9.840 group, with a 9.800 to drop as well. Also keep an eye on Sacramento State’s Emma Morgenthaler who currently has a 9.835 NQS but is still counting a 9.725; Lindenwood’s Gayla Griswold is in a similar position with a 9.750 to drop and a 9.830 NQS. Of the projected qualifiers, Davis and Kowalski are most vulnerable to dropping out of contention.

On the outside looking in: Kinsey Davis (Nebraska; 9.845), Hadley Roberts (Lindenwood; 9.845) and Amanda Gruber (Western Michigan; 9.845) all lost out on the tiebreaker with Volpe and Hong in this projection, but Gruber is in the best position to move up with a 9.950 season high and two 9.800s left to replace. Lana Navarro (Washington; 9.835) is also in a good position with a 9.775 to drop. Among the projected qualifiers, Weitz and Volpe are the most vulnerable to dropping out of contention with season highs of only 9.875.