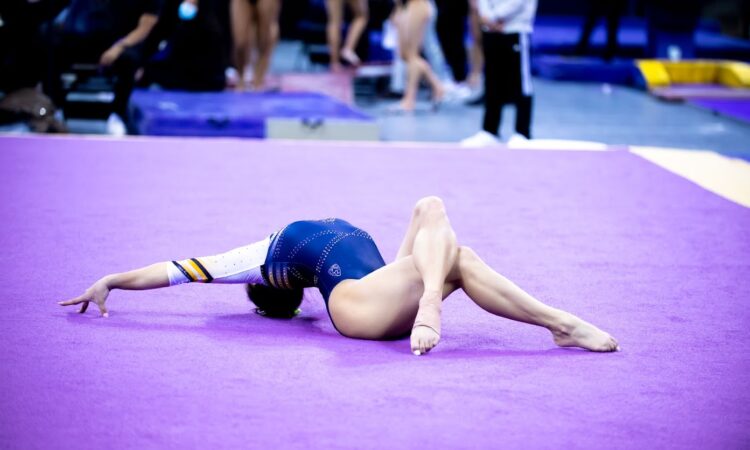 The last time we saw these two teams face off, three weeks ago in Oakland, you might recall that there was a liiiiittle bit of drama. The result was announced as a tie on the broadcast, but a late floor score adjustment gave the Golden Bears the win. Cal is objectively the better team, having broken through into the 197-plus range last weekend, but the rivalry between these two is fierce, and the plucky and surprisingly deep Cardinal has the goods to make Cal work for it.

Looks like Milan Clausi is out today, which levels the ground for these teams a little more.

Chrobok (Stanford): Twisting onto the table on her FTY, piked throughout but solid landing with a small hop. 9.725

DeSouza (Cal): Piked Jaeger to overshoot, great, FTDB with a medium hop back. 9.825

Gutierrez (Stanford): Attempted a one and a half but it wasn’t very high off the table and she sat it. 9.225

Brunette (Stanford): Higher vault than we’ve seen before, solid FTY with a substantial hop back. 9.725

Neault (Stanford): Full on pike off, super far back on the table and a slightly low chest with a hop. 9.75

Bordas (Cal): Blind to Jaeger to overshoot, super high, blind full double back with a hop back. 9.85

Bryant (Stanford): FTY, piked down a bit by her standards with a baby hop. 9.925

That rotation was Cal’s best and Stanford’s worst event

Waguespack (Stanford): Not to comment on women athletes’ appearances but her makeup looks really good today. Maloney to Pak great, double layout always seems to come in super close to the bar and pikes it down hard with a medium hop. 9.775

Bordas (Cal): FTY slightly piked throughout with a hop forward. 9.75

Lawson (Stanford): Maloney with major leg separation in the backswing to bail. Toe full with leg sep to double back stuck. Great. 9.8

Brunette (Stanford): Half to Deltchev to overshoot, pretty good. Little bit of feet on the Deltchev but nothing major. Double layout, TINIEST HOP I HAVE EVER SEEN which the judges will probably elect not to see. 9.825

DeSouza (Cal): Massive leg separation on the table, solid rest of the vault with a hop forward. 9.875

Alexeeva (Stanford): Toe blind to pike Jaeger, lovely, Pak, blind to double front with a step forward. Couple of handstands borderline there but so pretty. 9.75

Solari (Cal): Oh my god I can’t believe I lived to see the day. Front pike 1/2, leg split on the table and a touch short with a step forward but so happy she’s here. 9.675

Neault (Stanford): Maloney to Pak, toe full on the high bar goes the wrong way and she jumps off. Gets it on the second try, double back with a step back.

Lauzon (Cal): One and a half overpowered with two big steps forward.

Bryant (Stanford): Toe on to Tkachev, feet as usual, good Pak. Double layout stuck-ish onto an extra mat. 9.825 wh e re were .175 of deductions there?

Stanford bars scoring seemed really tight to me, but sometimes it’s hard to see handstands on TV. Cal vault definitely missed Clausi but this lineup has been hot and cold all season.

Onyshko (Stanford): BHS LOSO solid. Switch ring to beat, front aerial to split slightly tentative but good enough to be credited. Had a stream issue and missed her dismount but it sounds good. 9.8

DeSouza (Cal): Double tuck, overrotated with a substantial scoot back. One and a half front full good. Rudi double stag travels substantially sideways. 9.75

Bordas (Cal): Double back super controlled landing. One and a half front lay, toe on the line but I don’t think it was over, switch to switch ring half with sketchy position. Rudi, just about keeps the front foot from moving backward. 9.75

Stephenson (Stanford): Front aerial to beat. BHS LOSO maybe slightly off but avoids a check, full turn, split to sheep. Gainer full with chest low but stuck. 9.85, that was NOT better than Lawson but okay

Lauzon (Cal): One and a half front lay. Switch side Popa a little underrotated, one and a half through double full with major leg form but solid landing. 9.85

Tan (Stanford): Her name just got absolutely slaughtered, RIP. Side aerial, BHS back pike a little off line, adjusts well and keeps the deductions minimal. Switch to split pretty, switch half to beat with a little adjustment in the middle, full turn. Gainer pike with the stick held just long enough. 9.85

Schank (Cal): Double back, chest a little low but gets it to lunge FAST. Double pike overrotated, substantial backward movement there. Switch side Popa Popa pretty, one and a half front lay pretty. 9.775

Great beam rotation for Stanford and a solid floor outing for Cal, though Stanford is looking much closer to its best days of 2022.

DeSouza (Cal): Hitch kick front aerial a little unsteady, BHS LOSO with an adjustment. Beat to sheep, orphan sissone, one and a half with a hop. 9.85

Li (Cal): I was distracted by some weird music drama in the background and missed a couple skills but no drama, check on BHS LOSO, full turn. Sheep jump is good. Gainer tuck full stuck. 9.875

Lauzon (Cal): Switch to split, BHS BHS LOSO with a tiny adjustment. Front aerial. Side aerial back full with a lean forward. 9.9

Lawson (Stanford): One and a half through double back, scoots back right onto the line. Tour jete half split full with a crunchy front foot situation, front tuck, double pike a little deep but gets it to lunge well. 9.85

Watterson (Cal): Double wolf turn, BHS LOSO, switch to split nice and steady. Side aerial back full with a scoot back. 9.875

Bryant (Stanford): Great full in, super well controlled. Moves quickly out of her double pike, switch side Popa lovely. Going well so far. Open double tuck, only overrotated a little which is good for that pass.

Looks like Gabby Perea in the exhibition for Cal, though we can’t really see how well it’s going.

Great night for Stanford, just 0.025 off its season best, and a good one for Cal considering Milan Clausi’s absence. The leg events have some work to do if Cal wants to get back into the top eight and nationals-qualifying position, but there’s a long time yet to get it done.