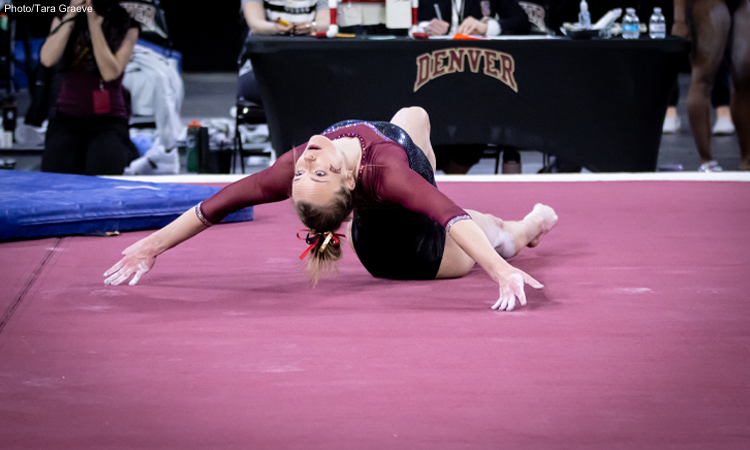 It’s a top 5 matchup between the top two Big 12 teams AND it’s on the main ESPN network!

Both Denver and Oklahoma are coming off season-best totals: 197.600 for Denver and 197.900 for Oklahoma. While Oklahoma is still the favorite, Denver did upset the Sooners at the 2021 Big 12 championship and has lessened the gap between the teams in recent years.

Denver’s 197.600 at West Virginia was capped by a stellar 49.550 on beam that propelled the Pioneers to the No. 1 on the event. The Pioneers’ beam team has certainly been impressive so far this season, even without Alexis Vasquez and the team not being at full-strength. Bars also continues to be strong for Denver and Lynnzee Brown is a highlight on every event—if you haven’t seen her double layout on floor by now, you may as well have been living under a rock. In non-senior land for the Pioneers, sophomore Rylie Mundell is coming into her own this year and her classmate Jessica Hutchinson is expected to add more events back today.

Oklahoma rebounded from a rough meet at Utah to nearly hit 198 at Arizona. The Sooners put up their own 49.575 on beam last week—we should be in for a treat with these two beam teams. KJ Kindler played with lineups last week; we’ll see if she sticks with them or continues to mess with them—it’s hard to argue against lineups that were able to put together a score that high, but then again, it’s Oklahoma and the lineups last week are theoretically not the six best on each event. Danae Fletcher competed on bars and floor for the first time last week, while freshman Jordan Bowers continues to impress. We’ll also be on Karrie Thomas watch today, as it’s unclear whether her absence was due to her lackluster start to the season, injury or COVID.

Be sure to watch on ESPN and follow along with live stats here.

Alright, ESPN, this basketball game is over. Give me gymnastics!

Quick lineup change for DU. Hebinck in for Sundstrom.

WE ARE TIED AFTER ONE!

Landings definitely weren’t quite there for Oklahoma on vault, and Levasseur’s 9.9 was generous in comparison to her peers’ similar vaults. Denver also had a nice bars rotation to open the meet. Again, some landing things here and there, but arguably better than Oklahoma’s vault landings at times. We’re in for a good one, folks!

This big network meet really getting the attention it deserves with KJC and Bart, and Peszek on the sidelines.

Fletcher (OU): battled with Karrie Thomas for this spot…didn’t know she was in the lineup for sure until the last minute. good first hs; tkatchev good; pak, hit; ok final hs; ftdt, close to high bar and tiny hop. 9.825

Mundell (DU): y1.5, deep landing and a slide back. Really impressed with her improvement on vault this season after being so good in JO and not being able to quite get it last season. 9.825

MKR on how the meet is going: “I think it’s going great…we need to stay calm and steady and in our own bubble…continued improvement and focus on the details”

Beaux spotting. That being, the plush animal Denver has been carrying around.

Mabanta (DU): ro 1.5 to lay good; really makes sure to hold the wolf position at the end of her turn; switch ring half into a split (?); front lay Rudi, slightly to side and not her best landing, but ok. 9.775

Thompson (DU): her routine is so fun! opening double pike, kind of tentative landing, could have gone oob. The roaring crowd because of the 10 may have got to her a little bit. Solid leaps; lay Rudi better landing. 9.65

Brown (DU): huge DLO, stays in bounds. ro 1.5 lay sissone good; her signature leap combo to drop to ground, nice; double pike oh noooo, she’s hurt. might be achilles. Same pass she did it on last time too. I am not okay. 😔 9.225

Bart Conner: “this life is not fair.” Yep. Correct.

I’d say slightly cracky scores for OU on beam, but it was a good rotation minus that fall. Denver was really counting on a good score from Lynnzee Brown to erase Thompson’s 9.65 and she unfortunately went down with a likely Achilles tear on her last pass.

Sam Peszek was talking to KJ as Lynnzee Brown went down and says they were very shook up.

Now is not the time for more feels. KJC tells us Lynnzee is wearing a purple ribbon in honor of her mom. And she gets a big hug from Brenna Dowell (they trained together at GAGE) too.

Thompson (DU): side aerial loso, good; switch switch, she’s supposed to do a switch half; side aerial full stuck. Not perfect, but another hit! 9.85

Abbie Thompson to Rylie Mundell: “there’s more to life than just gymnastics and the sun will rise again tomorrow.”

Sundstrom (DU): she’s the Brown replacement; bhs loso, just way off and can’t save it; literally leaps off the beam like, “noooooope!” very shaky routine, and rightfully so; KJC mentions she didn’t get the proper warmup. She’s not wrong. 9.275

Kudos to Denver for finishing with a solid beam rotation despite the circumstances. It wasn’t the Pioneers’ best beam rotation ever, but still over 49. Given the circumstances, it’s very impressive. Another week in the gym to deal with “what’s next” after Lynnzee Brown’s injury and hopefully things are a little more clear. Meanwhile Oklahoma had a strong performance en route to a 198. The Sooners pulled ahead on beam, capitalizing on mistakes from Denver on floor and sealed it with a solid floor rotation.