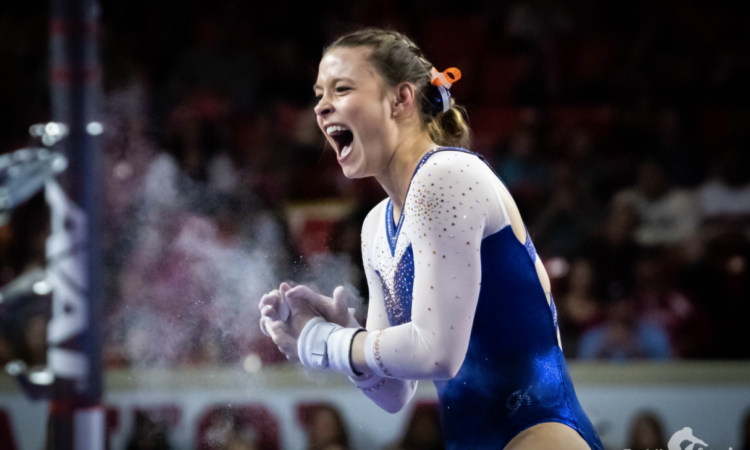 It’s your other favorite Florida-based editor’s turn to be inside the Stephen C. O’Connell Center tonight. The last time we were here, Florida was in the national limelight with an ABC broadcast in a meet that delivered three 10.000 performances. Tonight’s Link to Pink meet should be just as exciting as the Arkansas Razorbacks come to town after an unexpected week off.

With most of the Razorback freshmen out with COVID the first week and the entire team being unable to compete last week, we still haven’t seen the full picture of what Arkansas can do. However, their most recent team score of 197.200 is higher than Florida’s last two totals. It was also a top ten total in history for Arkansas, so the team is hot coming into Gainesville tonight. Can they upset Florida for only the third time in program history?

Speaking of the Gators, they will be reeling from the unfortunate news of two Achilles injuries which will sideline sophomore Ellie Lazzari and senior Halley Taylor for the remainder of the season. While Lazzari hadn’t been a major factor this season, Taylor’s loss will force the Gators to find a new addition to the floor lineup, which nosedived last week after two strong performances to start the season. There are plenty of options, so we’ll see how Rowland shuffles things tonight.

Lineups are out. Florida’s will be the same as last week except for floor, where Chloi Clark and Leanne Wong will be in this week. As for Arkansas, Sarah Shaffer is back on vault.

Stats for the evening here.

Skaggs (UF): Lovely full, not the biggest but stuck. That happening while “Thot Sh*t was playing in the arena was very 💅✨ 9.875

Schoenherr (UF): Legs in the air were a little wonky but it’s another stick and she held it for a minute! 9.950!

Shaffer (Ark): Pretty form on the Maloney, bail, arches over on the final handstand but saves it, good distance on DLO hop forward. The arena gasped for that one. 9.725

O’Hara (Ark): Was watching Trin but looks like she peeled off right away. Jaeger good, bail, little hop on DLO. 9.025

Florida had some nice sticks, but I’m wondering what happened with Edwards vaulting once again. Arkansas struggled on bars after a huge total last week; we’ll see if O’Hara can bounce back on her other event.

Hambrick (Ark): Some legs on her 1.5, crosses one leg back on the landing but a good ending to the rotation. 9.850

Wong (UF): Floaty Maloney to Pak, amazing handstand into the Van Leeuwen, stuck DLO. Wow this arena gets wild with the sticks. And it just got even wilder for her 10.000. Sheesh!

Rebecca said it for me. VERY nice bars for UF today. Arkansas is missing the “oomph” a little, with vault landings not egregiously bad but lacking the spark of last week. But the Razorbacks’ best event is next.

Blakely (UF): Pretty leaps, side somi with some hesitation, back full dismount small shuffle back. 9.875

Shaffer (Ark): Double pike her usual, back 1.5 to front lay, double back kinda wonky and she has to wave her arms to avoid stumbling back. 9.675

Baumann (UF): BHS LOSO no hesitation, switch leap to split, front aerial to beat, no issues thus far, side aerial, chest down on the dismount and has to circle her arms but she does hold the stick. 9.925

Sedlacek (Ark): Full-in chest slightly low but strong. Come on E-pass! Back 1.5 to front lay. Not as flexible in her leaps, double tuck great landing. 9.850 nice.

Smith (Ark): piked full in, slightly low landing but feet didn’t move. Double tuck in the midst of the cheers for Trinity’s 10.000, a bit off but fine landing. Leaps a little short. Not the highest double pike. But I really like that routine. 9.825

Arkansas got some mojo back on floor with its first 9.9+ score of the evening from Lovett. Meanwhile, for the Gators, 49.700 matches its program record.

Skaggs (UF): Solid double wolf, Rudi to stag, tour jete half to split full good positions, oh wow the Gator chomp clapping in the crowd woke me up a little, back 1.5 to front lay. 9.750

Lovett (Ark): Aerial to BHS, switch to split to beat beautiful, sticks the full dismount. 9.925, good night for her.

Smith (Ark): switch to straddle, big. Little check on her series. Stuck the full dismount. She has such a bright future for the Razorbacks. 9.900! They’re starting to come alive in the end here.

Baumann (UF): Back 1.5 to front lay, this is giving warrior princess, switch half to popa her usual pretty, big double pike. 9.750…Florida now counting that mark.

Hambrick (Ark): BHS LOSO, switch to switch half no hesitation, stuck full dismount. She was a bright spot tonight. 9.925

Elswick (Ark): Front aerial perfect, sticks 1.5 to end. Arkansas turned it around on this event, that will be the highest total of the night.

Reed (UF): It’s the Itty Bitty Piggy floor music for me. BIG DLO, same with the Rudi. Swtich half to wolf full, double pike few issues. Will be big. She was truly on the plane with Dwayne. 9.950

That was exactly what Florida needed to clock in a 198.150, the best score in the country thus far.