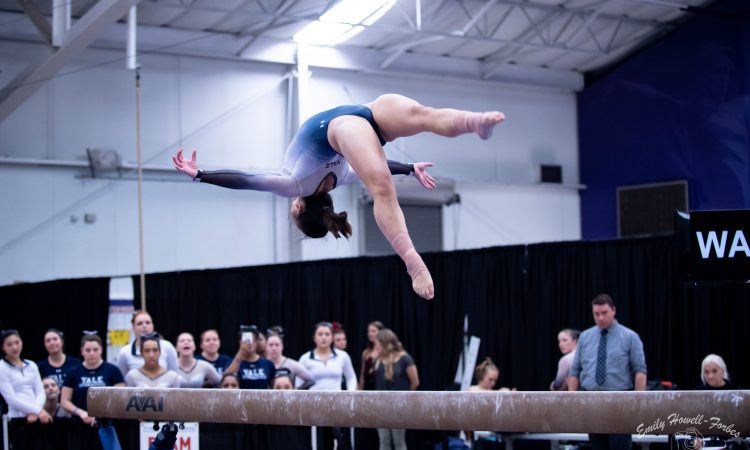 This will be just the second time for Yale and LIU meeting up, as Yale didn’t compete during LIUs inaugural season. It’s a meeting of two neighboring conferences, the meeting EAGL and the inaugural season for the GEC. Inaugural gymnastics for everyone. When last matched, just two weeks ago, LIU just outscored Yale by a slim twenty-five thousandths of a point.

LIU had a record high beam score on the road last weekend with a 48.800, beating a 48.525 previously scored. LIU has been on a hot streak, already beating all but two of their team scores from last season, including nearly toppling their 192.725 at the EAGL championships last spring. Their highest score, a 193.100, could be well within reach if not surpassed if the Sharks hit and keep things clean. I hear Jaws music in the background. The Sharks can easily rely on Ilka Juk and Talia Folino to continue their chomp away on their beam records. If you watch just one person on beam, keep your eyes peeled for Juk’s dismount.

Yale has yet to score above a 191.000 so far this season, while LIU just posted a 192.650. This is a rocky start for Yale as it typically notches scores in the 193 to 195 range, Yale does have Lindsay Chia claiming all around titles in both meets. Yale lost Claire Qu in the opening meet of the season due to an injury on beam and has not yet returned to the lineups. Yale is capable of putting up those solid, reliable, routines. It’s just a dusting-off process between the Bulldogs and their full potential.

First time at home for LIU with a crowd.

Will update scores as I get them. The screen keeps cutting in and out…

Wilson (Yale): Bar judges are grabbing a coffee. Release good, a little short on handstand but nice giant full, takes a step back on the double tuck. 9.800

Drutau (Yale): Exhibiton. Blind to straddle jaeger, big release but just too far away to catch. Little archy on the bail. Ftdb for dismount, steps back.

LIU has only twisting vaults in their lineup! A few hiccups and rough landings today, but it’s still early in the season. Yale went hit for hit on bars, an improvement over last week, and they’re dropping a 9.525 and pocketed four routines over a 9.700. A few handstands caused some hiccups but otherwise, they were their usual selves. LIU posted four vaults over a 9.600.

The LIU leotards are new today, and they’re a ridiculous shark camo pattern. I’m definitely not searching the internet for this pattern later. More shark leotards please. But also more teams with patterns using their mascot.

Scores have been updated.

Bedminster (LIU): Bail, little bit of form. Short on the handstand before the dismount, double lay, a bit short and takes a few steps forward. 9.425

Aviad (Yale): Sits down yurchenko half. Yale will want the rest of the lineup to hit. 8.925

Sanchez (LIU): Piked jaeger, little short on the handstand, some leg separation on the pak, short on last handstand. Takes a couple steps forward on the double lay. 9.675

This is a tight meet so far, we’re headed into the third rotation with just a tenth between the two teams. LIU had a really solid bar rotation while Yale faltered a little on vault after a fall, but got their momentum back and were able to drop it. Yale will want big scores on floor since they’ll be ending on beam, everyone’s favorite event to end on. LIU will be checking beam off their to-do list hoping to keep that momentum going after bars.

Apparently, Seina Cho will be competing floor for the first time for Yale. LIU’s 48.700 on bars is a program record. Edit: Apparently not?

Meeks (Yale): Opens with a double pike, but goes oob and sits it down. Front full to front tuck, sits it down. Switch ring pass, nice. Ends with a rudi, little short on the twisting. Not quite what Yale would want but they’re putting six routines up today. 8.075

Each team has a fall they want to drop so far.

Chia (Yale): Rudi to split, not quite controlled but lots of height. Leaps, great amplitude. 1.5 to front lay, good, just a few stutter steps to keep it in. Still love this Bad Guy floor music. 9.800

Judges are having a meeting on floor.

Wang (Yale): Love this choreo. Opens with a double pike, great. Leap series good, a little shy on the split jump at the end. Double tuck, so solid. RO 1.5 to front lay, solid. Much needed. 9.825

Both teams had the PRESSURE after having a fall early in the lineup. And the meet is within .05, so no pressure for anyone in the last rotation. OH a score changed and we are TIED. Ricketts score was bumped to a 9.725. And a Yale score changed so Yale is once again ahead. Not sure about all the score changes. Wang’s floor score bumped to a 9.825.

Well, Yale has the pressure ending on beam. They’re ahead by .05 once again, until the next score change. Both teams scored within the high 47s on their respective final events last weekend. This will absolutely be a battle of hitting routine for routine and giving nothing away.

Barrington (LIU): Opens with a big double tuck, some form. Leap series was a little shy on the 180, but good amplitude. RO 2.5 good, steps to the side. Good last pass, solid routine. 9.750

Yale will want Mangiacapre’s score to be the low score.

Wilson (Yale): Front tuck, steps back. Switch leap split jump, solid. BHS LOSO, a bit of knees and steps back but solid. Cat leap side aerial to tuck full, has a hop. 9.650

LIU with the higher scores so far.

Loo (LIU): Opens with a double lay. Great leaps. Front tuck through to double tuck, chest down a bit but solid. 9.800

Exhibition for Yale from Drutau.

Waiting on final scores, but looks like, as of now, LIU will have this by at least .075. LIU took the win by a slim margin of .325 today. LIU had a program-high on bars and although Yale had some hiccups on beam, they still had four routines over a 9.650.