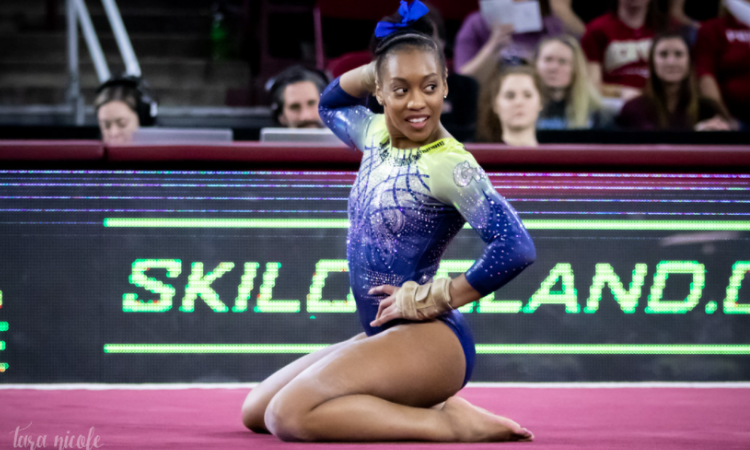 This is going to be a sneaky good meet, folks! North Carolina and Missouri both smashed expectations in their home openers and George Washington and Brown both came out looking strong. EAGL matchups are usually close and reliably exciting; throw in some Ivy League panache and SEC flair, an eponymous skill or two, and this should be a lot of fun.

Besides, who doesn’t love a good quad meet?

Shaky performances on floor kept the Tar Heels from matching their performance in Week 1, but they still looked pretty darn good for this early in the season. The freshmen continue to excel: Julia Knower edged out classmate Lali Dekanoidze for the all around win at the Penn quad, while Dekanoidze snagged top place on vault.

Missouri came out swinging in its Week 1 home opener with a massive 196.600, but had to sit out the following week due to COVID protocols within opponent LSU’s program. Can the Tigers keep that magic flowing in Chapel Hill after an unexpected bye week? It’s also worth noting that Missouri has quietly become one of the top beam teams in the country: The Tigers finished 10th overall in 2021 (with Helen Hu out for the season) and are currently ranked second.

George Washington kicked off its season in a big way against Penn, besting its 2021 debut score by nearly two points. Graduate student Deja Chambliss continues to shine, earning the Colonials’ top scores on three of four events and EAGL Gymnast of the Week honors. In addition to Chambliss, keep an on Kendall Whitman: Her eponymous vault – a front handspring onto the board, front handspring pike or layout half off – is one of the few truly unique skills being competed in the NCAA (not to mention one of the coolest).

Brown competed in its first meet in nearly two years last week, led by USAG All American and 2019 bars champ Mei Li Costa. She fell on her signature event on Sunday, but has the potential to outscore gymnasts from bigger programs when she hits.

The meet will be live streamed with commentary from Tar Heels gym alumna Maddy Hargrove (’19) filling in for Christina Chauvenet.

Scores will (hopefully…) be available here.

Hmm… It’s 04:06 PM and the stream still hasn’t started (I promise I haven’t fallen down on the job).

Banen (GW): Solid full pirouette to double tuck with a step back. 9.625

Gatzendorfer (Mizzou): I believe this is the first we’ve seen the freshman. Feet visibly flexed on the gainer pike, but landing was good. 9.775

Walsh (Brown): Good control on her opening double tuck. Leaps a bit shy. Back 1.5 with soft knees and has to tuck the front lay; lands in a deep squat but holds on. 9.600

Sheremeta (Mizzou): Excellent bh loso. Her extension is lovely. Gainer tucked full off the end. A little crooked in the air, but a clear stick. 9.900

Swords (Brown): Short on the double tuck and has a large step forward. Didn’t quite hit 180 on her switch leap, but the Popa was great. One and a half to front lay with some soft knees and leg sep on the latter. 9.525

Gardner (Brown): Switch leap to wolf full, good amplitude. I’m into the Mambo No. 5 mix. Didn’t get a good punch on her bhs and falls on her double tuck. 9.125

Hu (Mizzou): Front aerial to bhs, gorgeous. Front aerial to scale to needle scale. Truly perfect. Split 3/4 looked a hair shy, but the angle is admittedly not great. Step forward on her side gainer full. 9.825

Bedell (Brown): Front through to double tuck, beautifully done. Not completely in control of the landing, but she finessed it well. Great amplitude on her leap series. Big double pike, unfortunately OOB. 9.775 is not bad at all given the OOB. She’s absolutely one to watch.

Again, apologies for a rocky start on my end (particularly for any misspelled names or missed routines).

Kratzer (Mizzou): Glad to see yet another freshman make her debut! BIG opening double tuck with a bouncy landing. Great amplitude and position on her straddle series. This is such a different feel from her elite routines, and it suits her. Definitively stuck double pike. 9.850

Chambliss (GW): Gorgeous, stretched bhs loso with a bend (don’t even care, even the bend was pretty). Bhs double full with a hop. Great. 9.650

Knower (UNC): Gienger with some leg sep on the regrasp. Excellent bail. High FTDT, close to the bar and a big step back. 9.700

Costa (Brown): Nice Y full. A little bit of an early twist, so doesn’t quite get the amplitude and has to pike down and take a hop. 9.525

McCrary (Mizzou): Front lay to Rudi, bounces out of the landing. Double pike a bit short, has to hop forward. 9.825

Looks like Missouri is testing some of its depth this week; smart move for the Tigers, if not so great for Fantasy Gym players. Kratzer’s routine was a standout for me from a performance, if not an execution perspective (although her execution was solid).

GW had some gorgeous moments on beam and no major issues. They should be pleased with this one.

UNC opted to stick with five competitors today, not

Marshall (Mizzou): Another solid Y full. Chest looked a little forward, but I don’t think the feet moved (who can really tell from a head-on angle though…) 9.750

Gardner (Brown): Some feet on her Pak and again on the uprise. High double tuck to finish.

Petrillo (Brown): Couldn’t quite find the landing on her double back and bounds forward.

Moore (Mizzou): Her usual enormous, flared out Y 1.5, basically stuck. “I think some of the Carolina basketball players could have walked under that!” Agreed. A well-deserved 9.950

Richter (Brown): Straddled Jaeger a hair close. Shy on the final handstand. Blind full to double back a little low, but a nice landing. 9.525

Raymond (GW): Back 1.5 to front lay, legs a little soft and salto a little flat, but she finessed it well. Double pike right to the edge and has to take a step OOB. Good switch side to wolf full. 9.775

Culton (UNC): Bhs loso with a wave and hip bend. Cat leap to switch side, lovely. Front aerial to beat, perfect. Side aerial to full, stuck. 9.925

Cantello (Brown): Massive Tkatchev. Loses it on a handstand and has to readjust, but stays on. Great tension in her bail. Per the commentators, she was injured on her dismount, unfortunately… 7.950

Knower (UNC): Fabulous bhs loso. She’s another with great extension. Moderate check on her front toss. Full turn obviously ip on her toe. Beat to switch half and a leg up check. 9.525

Solid vault rotation for Missouri, though they’re certainly missing Celestine’s Y 1.5. Moore was the clear standout, though Kratzer demonstrated her viability as a steady lead-off.

UNC killed it on beam, even with a miss from Knower. The Heels’ 49.350 actually outscored Missouri’s 49.225, so… Not bad given how many teams have struggled on beam this weekend *cough*.

It’s too bad the Colonials had to count a fall, because that was an overall fun and dynamic floor rotation. It speaks to the quality of the routine construction and execution that Whitman earned a 9.325 with a fall.

Brown had some struggles on bars, but Costa in the anchor position was a treat as always. I (thankfully) did not see what happened to Contello, but hoping she’s OK.

Marshall (Mizzou): Ridiculously high FTDT. She finished the twist above the bar and drilled the landing. 9.875

Whitman (GW): Big straddle on the preflight, but great in the air and well-controlled landing. 9.800

Patrick (Mizzou): Straddled Jaeger a hair close, but doesn’t bother her. DLO with chest down but fights for the stick. 9.750

Dekanoidze (UNC): Bounces out of her double tuck, but not bad. Switch ring to switch half, good positions. Back 2.5, gets it all the way around. Fhs full to front lay, perfect. 9.875

Wow, what a meet! All of the teams looked sharp, but Mizzou and UNC have left my jaw on the floor.

Missouri just tied its second best score from last year in its second meet of the year, even without Celestine or nationals qualifier Sydney Schaffer competing or home-scoring advantage. SEC, you are on notice!

The Tar Heels broke 196 once last season, late in the season; they improved on that total by over three tenths today. Again I say, “Wow.”