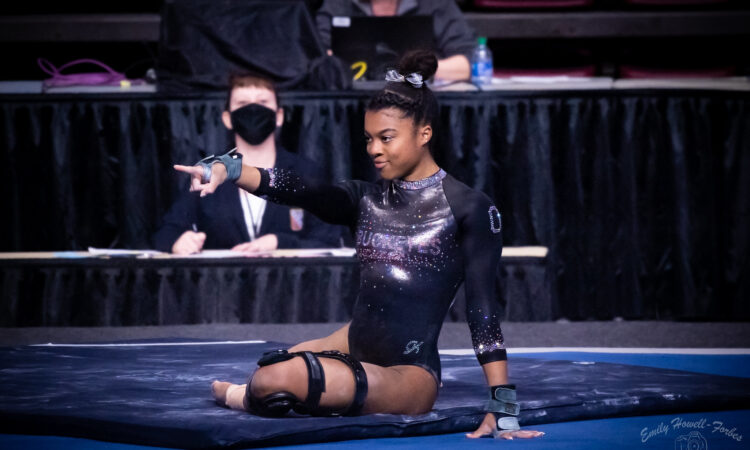 It’s way too early to worry about this, but these are currently the No. 5 and No. 6 teams in the Big Ten. They’re close geographically, they’re close in recent season performance, and there’s a good chance that they’ll end up fighting for a single spot in the Big Ten Champs night session. (It really depends on the format, which they seem to change every year.)

Still, despite the close-ish rankings there’s about a point between Ohio State and Penn State in both average and season high scores. While both teams made improvements between weeks 1 and 2, the Nittany Lions have had issues on beam in both meets. Bars was the Buckeyes’ biggest challenge in the first meet, but the return of Stephanie Berger from a long injury outage seems to have solved them for the moment.

Bear with me, my first meet went long so we’re multitasking!

Johnston (PSU): Missed the first half due to… the other meet I’m watching… but blind full double back stuck. 9.825

Beckwith (PSU): Blind to Jaeger, slightly soft back, again on the Pak with leg form as well. Great handstands, double layout with a hop forward. 9.825

Jennings (OSU): FTY, a little higher than Riccardi, the TINIEST scoot back. 9.85

Hlavach (OSU): Yurchenko full on, pike off high with a little hop back. It’s totally gorgeous. 9.8

Bonsall (PSU): We were watching a slow-mo of Hlavach’s vault while this one happened, hop forward on dismount. 9.825

Some interesting lineup choices for the Bucks. No Lexi Edwards definitely makes a difference and keeps

Schweitzer (OSU): Maloney to bail, a little loose-leggedness but minor, blind full with leg separation to double back with a hop.

Hlavach (OSU): Clear hip to Gienger to overshoot, huge and gorgeous, Blind full double back with a little hop back but huge air. 9.775

Johanson (PSU): FTY looks a little low following Bridgens, medium hop. Judges thought so too. 9.75, placed differently in the lineup she might have gotten a different score.

Miller (OSU): Toe to Maloney to bail, TEENSIEST foot flicker that the judges probably didn’t see, step back on her double layout. Great. 9.825

Riccardi (OSU): Toe on to Ray, looked like a minor loss of form on the catch, gorgeous bail. Stalder to double back stuck. 9.9

I’m not sure about some of the judging here but I’ll console myself with the absolute beauty of that Ohio State bars lineup. Just absolutely some of the loveliest gymnastics in the country.

Berger (OSU): Cat leap side aerial, minor check. BHS LOSO. Full turn, switch leap to split half is insane. Split to side aerial back full stuck… tripped going to salute but I think it won’t be an issue. She’s so awesome. 9.85

Astarita (PSU): Open double back nailed. One and a half front lay, not too much height on the layout, tour jete half Popa, double pike a touch overrotated. 9.85

Ohio State has a real chance on floor since Penn State has been iffy on beam here, but this is a big margin at this point in the meet.

Ayers (PSU): Front aerial BHS, tentative but made. switch straddle 1/4. Cat leap front aerial, leg up and falls. Side aerial back full with a hop. 9.1

Warga (OSU): Two and a half front tuck beautiful with a hop. Switch half wolf full. Front double full, overrotated with a big step but stays in bounds. 9.8

Gagliardi (OSU): Front lay to Rudi, great control. Switch side to Popa. Double pike overrotated but gets her foot back really fast and keeps it in a lunge. 9.875

Hankins (OSU): Full in, great landing. Front layout to Barani to split. Switch ring tour jete half. Double back, baby shift of the front foot. The energy in Covelli is bananas right now. 9.9!

Hlavach (OSU): Pike full in, a touch overcooked with a long lunge but keeps the front foot down. One and a half front lay. Switch side, step through, tour jete half Popa. Her leaps are so delicate. Forgot to write the last pass down because I was vibing too hard.

(PSU): Commentators said this is Vihrova but I’m 90% sure it’s not. Split to very, very hairy sheep. Made acro series, one and a half twist with a hop.

DOWN TO THE WIRE and a totally electrifying meet. Massive scores for both teams this early in the season and a ton to be proud of. Penn State slayed its beam demon, Ohio State got a season high with a depleted roster and five up on floor, both had some visually spectacular and memorable routines and look like teams that can get 197s in a few more weeks. Just totally delighted by how this panned out. What a meet.