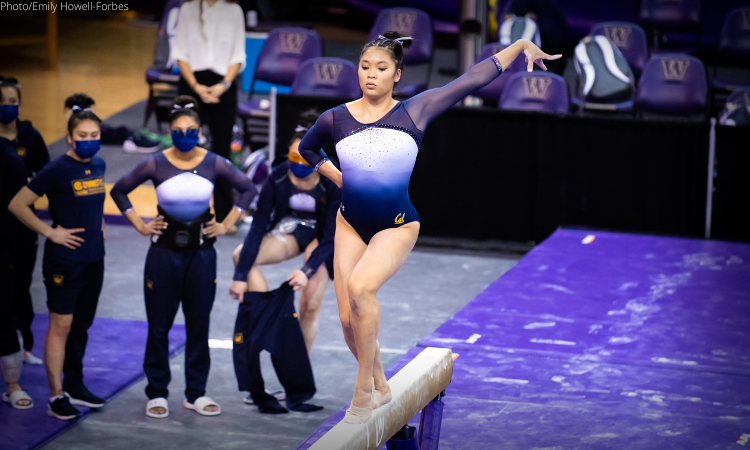 The redshirt freshman is the fantasy gymnastics player’s greatest opportunity and biggest challenge. Typically not included in freshmen analysis but without a track record of college scores to prove their worth, they’re often forgotten entirely. So you don’t make that mistake this year, we identified the biggest names you can’t miss from the recruiting class of 2020.

Note that we’re using the term “redshirt freshman” broadly here. Not all of these athletes are listed as R-FR on their rosters, but all were freshmen in 2021 who did not compete for various reasons.

After putting up a solid score on beam in the Sun Devils’ 2020 intrasquad meet, Cienna Samiley was surprisingly absent from Arizona State’s lineups throughout last season. Samiley was expected to primarily contribute on bars and beam, so watch for her powerful sets on both apparatuses. She also vaulted a Yurchenko full-on as a level 10 that carries a 10.0 start value in the NCAA, making her an ideal member of the vault lineup if she has improved on her form from her pre-collegiate days.

Emma Kelley sat out the entirety of her freshman year with a wrist injury. Kelly has an E-level full-twisting double layout dismount on bars. Her strong Yurchenko full is even more relevant for the Razorbacks after the medical retirement of Jordan Olszewski. Kelley also provides clean tumbling and an energetic routine that could score very well.

Coming into the 2021 season, prospects were high for this trio of Golden Bears who unfortunately did not make their California debuts. Elise Byun is coming off of a torn Achilles but can hopefully crack the vault lineup this season with the Tsukahara entry she has been training. Gabby Perea is a former elite with an arsenal of skills and has been teasing us with a standing full on beam that deserves some time in the limelight. Blake Gozashti has also been showing off on beam this offseason, playing around with a long but thrilling front aerial to back handspring to switch half to front aerial to straddle three-quarters combo. It might not all make the competition routine, but any snippet of that combination brings in some welcome bonus.

Nhyla Bryant was one of many Georgia gymnasts hit by the injury bug for Georgia last season, undergoing shoulder surgery prior to the start of 2021 campaign. Bryant has shown impressive training video this preseason—including a double layout on floor and sky-high splits on beam—and could factor into several of the Gymdogs’ 2022 lineups.

The Gophers had a big bar spot to fill in 2021 after Ivu Lu’s graduation, and Sirjord looked like just the right piece all preseason. Unfortunately, injury kept her out of competition during Minnesota’s conference title-winning year. She’s back in action for 2022 and looking like a shoe-in on bars again.

Kyra Burns is a former level 10 national champion on bars and was training a Yurchenko one and a half on vault prior to her shoulder injury. She should be a lock for those lineups (shoulder permitting). At the Tigers’ recent 2021 Black and Gold Intrasquad, she contributed an impressive set on floor. She’s also posted training video on beam during preseason.

The Sooners had some depth challenges in 2021 with highly anticipated freshmen Sullivan and Fletcher out for the year. Sullivan, who suffered side effects from COVID, has shown preseason work on bars and beam. Meanwhile, Fletcher joined Oklahoma a year early in 2021 as a bit of a dark horse. She has been featured regularly on bars this fall.

Olympic gold and silver medalist. Enough said? We could leave it at that, but Carey has the opportunity to become an all around star in the NCAA. Much of her elite career was focused on her strong events of vault and floor, but with lower difficulty and improved execution she could end the season as the top freshman of 2022 in the all around.

Penn, like all the Ivies, suspended winter sports in 2021, which meant we were deprived of Hsu’s debut season. She’s one of the Quakers’ best-ever recruits and could be a record-breaking gymnast in Philly. She has trained a Yurchenko 1.5, is an almost-certain all arounder and shouldn’t be left out of the potential individual regional qualifier conversation.

We didn’t see any routines from Alexeeva or Onyshko in the Cardinal’s brief 2021 campaign. Both elites should immensely improve the bar lineup, and WOGA-trained Russian elite Alexeeva has all around potential. Stanford will look very different in 2022, due in no small part to this pair.

Emma Otsu is an all around competitor week one for UC Davis and has the potential to be one of the best gymnasts in program history. Ostu’s Omelianchik vault scored a perfect 10 in level 10 in 2020, and her unique tumbling pass of a front double twist to front pike is sure to translate well in NCAA.

Australian Folino lost her 2021 season to bureaucratic red tape from the NCAA. In her elite career, she was the 2018 Pac Rim beam champion and took silver on the same event at Australian nationals that year. A member of the 2017 and 2019 Australian World Championships teams, she can also boast a gold in the all around at the 2017 International Gymnix meet. She’s poised to be a gamechanger for the Sharks in 2022.

Zivat was one of the most highly touted Big Ten freshmen in 2020, boasting a huge Tsuk full and excellent tumbling. She broke her foot shortly before her first season and didn’t compete in Michigan State’s two 2021 outings either. After a transfer to Iowa this year, it might finally be her time. She’s been featured in training clips all preseason and appears healthy and ready to go. We might shed a tear when she finally salutes for the first time.

Garcia’s freshman season was only two meets thanks to a frustrating web of COVID issues for the 2021 Spartans. The 2018 Nastia Liukin Cup competitor competed all four events in both outings, notching a 9.900 on beam in her first meet and breaking 39.000 in both instances, seriously impressive accomplishments for any freshman, let alone after an abbreviated preseason. With a full and more normal lead-up to January, Garcia is poised to shine brightly in East Lansing

The San Mateo alumna snuck into the Washington beam lineup at the very end of the 2021 season and delivered two hit routines when hits were sorely needed. Now that she’s healthier, she looks like one of the Huskies’ best bars options too.