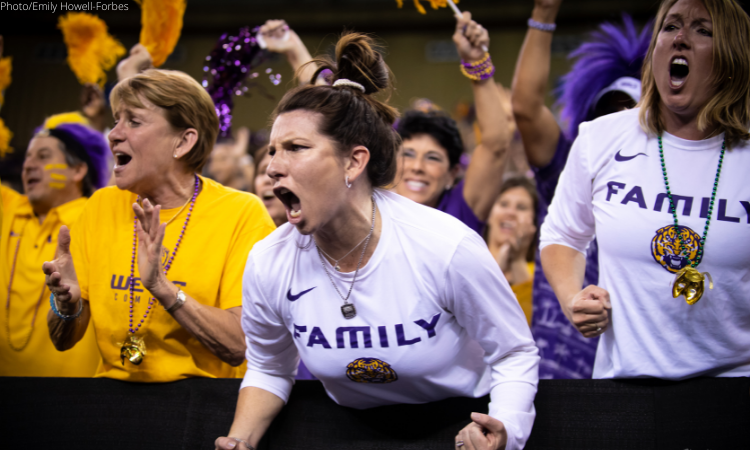 Inspired by legendary ESPN basketball writer Zach Lowe’s annual ranking of the top 10 most fun NBA teams to watch, we bring you a gymnastics version. This has nothing to do with scores or predictors of success and everything to do the experience of actually watching gymnastics.

The entirely unscientific criteria is as follows:

Meet production: Fun theme meets? Over-the-top flaming entrances? Famous arena announcers? What excitement do home meets entail for the team? Do they bring the party on the road?

Unique skills: It’s undeniably cool to watch a meet as a seasoned gym fan and have to stop and think about a skill you just saw. Yes, that was a Randi!

Superstars: Teams don’t need to be top 10 to have really exciting, engaging stars on the team.

Hype machine: Some teams are just, dare we say, lit on the sidelines. And it is so much fun to watch. Plus, sometimes the hype around an exciting new coach, or exciting new competition arena, makes all the difference.

The Redbirds do not shy away from big skills. You saw Angelica Labat’s Yurchenko one and a half at nationals this year, and in 2022 Illinois State is adding two more, from freshmen Jaye Mack and Alana Laster. The bar squad is stacked with E dismounts and features Sofia Iribarren’s gorgeous work and a new Hindorff from Mack. Plus Mia Quigg brings excellent dance work on floor, and Jazmine Neely has a new double Arabian. PHEW. The Redbirds have all the pieces for blowout-fun meets and big time upset potential when they get the opportunity (they upset Iowa State last year!), which is always exciting.

Illinois State ⁦@RedbirdGYM⁩ is about to have three Yurchenko 1.5s. You know Angelica Labat’s, but add Alana Laster and Jaye Mack to the list. #NCAAgym pic.twitter.com/FIZcRn81FA

What on earth is Chris Brooks going to yell next? Only time will tell. The Razorbacks have been pulling in huge crowds of fans to Barnhill under Jordyn Wieber and have the chance to pack the big girl arena, Bud Walton, this year. Add gymnasts like Kennedy Hambrick and Leah Smith to the mix, and you’ve got one hype program.

Remember when the Wolverines pulled out two surprise vault upgrades on the road and became the second team after Oklahoma to throw six in a lineup? Historically, Michigan was a team that was conservative with big skills, saving upgrades for the postseason. Over the past few years, though, we’ve seen huge difficulty throughout the season. When you go to a Michigan meet, you’re signing up for full-twisting double layout bar dismounts (plural), a Deltchev, a double tuck beam dismount and Natalie Wojcik’s two-E pass floor routine. Phew!

Where else in the United States can you go to see gymnasts from Australia, Canada, Guatemala, Italy, Peru, Puerto Rico, Spain and the UK all compete on the same team? Nowhere. Ames is it. Add in Addy de Jesus, a top national all arounder and some top-tier gymnastics and you’ve got a real wind storm (no? maybe? work with my jokes here). From a Randi to front double full + punch front layout and a parade of Yurchenko one and a halfs, Cyclone meets are anything but boring.

Did you watch Towson last year? If not, you missed out and should think about making some changes in 2022. The No. 28 floor squad in the country is *fire emoji.* The Tigers were stick machines last year. They also debuted their first-ever Yurchenko one and a half courtesy of Camille Vitoff, and you’ll be hard-pressed to find a prettier beam routine than Emerson Hurst’s.

The Huntsman Center should be one of the legendary must-visit arenas on any gym fan’s bucket list. With record-breaking ticket sales year after year, and such attention to detail when it comes to the fan experience, the Utes know how to put on a show. Not to mention the student section; remember when they pulled up newspapers during UCLA beam routines? Add a sprinkle of star power from gymnasts like Grace McCallum and Maile O’Keefe and a dash of dynamic and electric coaching from Tom Farden, plus some of the best celebrations in NCAA gym, and you’ve got yourself a show.

Speaking of the Bruins, Pauley is another legendary arena. It was the site of gymnastics competition at the 1984 Olympics, and we always get a tear in our eyes when ’84 Olympians Kathy Johnson Clarke or Tim Daggett return. Plus, the student section knows every floor routine. Every last one. With the floor strategically positioned right in front of the students, the last rotation is always a party. And with viral routines year after year, the event never disappoints. Plus, UCLA has some of the most polarizing leotards in the country, and they get everyone talking.

Stay with me here: The Quakers have five 10.0 start value vaults lined up for 2021. Five! That’s more than most major conference teams and includes a unique Yurchenko full-on tuck. All of the gymnastics is original and exciting; think a handstand to loso + loso beam series and a Markelov. Penn has some big time meets on the schedule this year, too. Catch the Quakers at the Keystone Classic and Masters Classic against some big name teams. Do not sleep on this exciting squad.

You don’t sign a name like Danna Durante to your head coaching role to have a boring year. Durante is sure to bring her SEC experience to Carmichael Arena, and we can’t wait to see what’s in store. Plus, former 5-star recruit Lali Dekanoidze is set to make her debut, joining last year’s breakout star Elizabeth Culton. Plus, the Tar Heels were the first in the nation to host a Pride Meet. What will they bring in 2022?!

Love ‘em or hate ‘em, we’re all talking after an LSU meet. Between the Voice of LSU, a sold out PMAC and literal flames on the floor, the Tigers take their home meets very seriously. The squad is stacked with star power like Haleigh Bryant and Kiya Johnson, not to mention the most famous NCAA athlete out there in Olivia Dunne. Jay Clark’s frankness is legendary in itself, too, and the floor music is always guaranteed to bring down the house. Too bad we couldn’t watch Gymnastics 101…but we’ll have our eyes on LSU’s home opener to be sure.

READ THIS NEXT: A Look at NCAA Gym’s Unbreakable Records