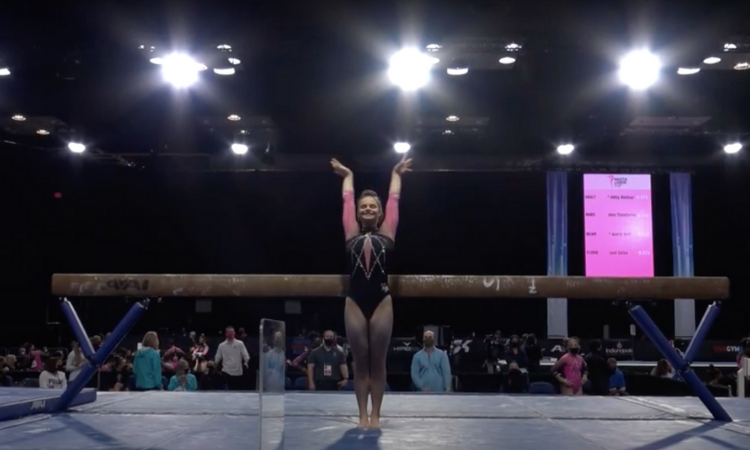 The most anticipated series is back! We looked at the data for each incoming level 10 freshman on each event to see which gymnasts are at the top of their class across the apparatuses and in the all around. This week we’re looking at the top 10 beam routines for 2022.

If you’re wondering where Kara Eaker and Morgan Hurd are, don’t worry! We’ll be reprising our Most Anticipated Elite Freshmen series later in the summer.

Neault didn’t compete in 2021, but she was very consistent in her previous two seasons with only one fall on beam. She competed a very difficult routine in level 10, including a triple series, two dance elements in a ring position and a double tuck dismount. She will likely downgrade in college to emphasize form over difficulty, but her potential is very high.

Dekanoidze’s routine features a solid back handspring to layout step-out, a switch leap to switch leap dance series and a double twist dismount. She’s extremely consistent in both her form and her scores, with no falls since early 2019. She will surely join Elizabeth Culton at the end of UNC’s beam lineup from the start.

Recent videos of Marcheli are difficult to find. The one we were able to locate showed a well-controlled candle mount, a double wolf turn, a side aerial to back handspring and a roundoff to back 1.5 dismount. While there are some minor form issues on some elements, her routine is college ready and should immediately contribute at Arizona State.

Penamante has beautiful extension and toe point throughout her beam routine, reminiscent of other recent Legacy Elite alumnae Andi Li and Ellie Lazzari, but she did not compete her senior season, presumably due to injury. Beam was Iowa’s lowest-ranked event in 2021, so she will be a welcome addition to the lineup if healthy.

While the below video includes a fall, it’s clear that Fears has many attributes that will score well in college: poise, toe point, extension and excellent form. This was her only fall in the last two seasons, so we’re willing to call it a fluke!

The highlights of Gamiao’s routine include a dynamic layout step-out to layout step-out series, as well as a beautiful switch leap to split full combination. Arkansas returns most of its beam lineup from 2021, but Gamiao should definitely be in the mix for a spot.

Sabado-Baez is probably unfamiliar to most casual gymnastics fans, but she won’t be for long. Her beam routine features plenty of difficulty with a triple series and a front aerial to arabesque, but she also brings gorgeous oversplit on her leaps and a stylish flow to her entire routine. Did we mention she hasn’t had a fall since 2018? She will be a star at Air Force.

Hudson has a little bit of everything in her routine: a triple series, a switch leap to switch leap combo, a switch half and a side aerial. She has a confident style during the routine and excellent toe point. Alabama has plenty of depth on beam, but she will likely be featured from the start.

Schulte brings some unique elements to her beam routine, including a switch split jump and a standing back pike. She is poised and confident throughout the routine and has beautiful extension on her leaps. She’ll be a strong contender for the anchor position at MSU.

Florida’s incoming class is well-known for its big-name elites, but don’t forget about Blakely, a former elite herself who dropped down to level 10 for her senior season. Her execution on beam is clean, and she has great extension on her leaps. As the only athlete in the class of 2021 to score a 9.900 on the event, she’s sure to make a huge impact in college despite joining the top-ranked beam squad in the nation, which happens to be returning the entire 2021 lineup.

READ THIS NEXT: Data Deep Dive: Most Anticipated Level 10 Freshmen on Bars