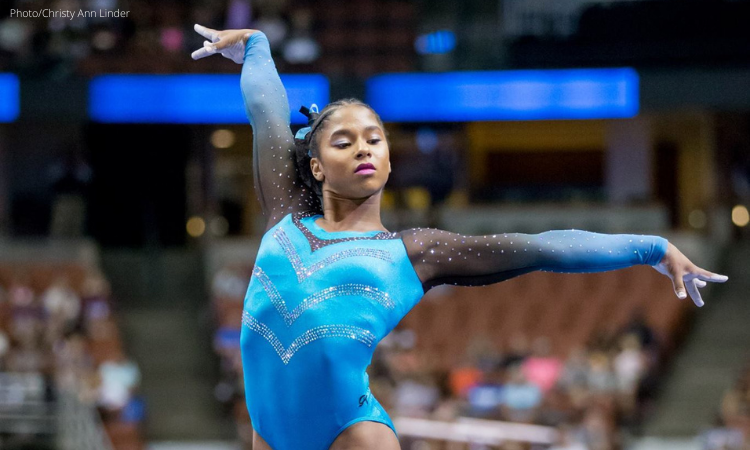 The U.S. Classic is traditionally an up-and-down early season meet, and this year’s edition was no exception. All the same, there were some historic moments. Simone Biles competed her ridiculously difficult Yurchenko double pike for a 16.100, and Chellsie Memmel made her comeback official, competing for the first time since 2012.

Biles aside, Leanne Wong (class of 2021) is probably the most talented all arounder in the field. Making the Olympic team will depend on her polish and consistency, but there’s no way she will not be stellar in NCAA competition. Her musicality is also really good, and we’re curious to see what Jeremy Miranda will come up with for her choreography. It’s a shame, though, that her floor routine doesn’t include a double Arabian anymore, she performed that skill beautifully. Hopefully she’ll bring it back in college.

Morgan Hurd, who will join the Gators in January, is another immensely talented athlete. She competed on beam and floor and showed some nerves, but her lines were among the best in the competition. We can’t wait to see her in Gainesville.

We’re also begging Shilese Jones to sign her NLI with the Gators. Her stuck Yurchenko double was SO beautiful, and we’d love to see it weekly in the NCAA. Extra point to Jones for a stunning purple leotard with mesh sleeves that matched her skin tone.

In the class of 2022, Kayla DiCello with her poise and composure could become a rock in the NCAA. Except for her leaps on beam, everything else is spectacular. Sophia Butler was equally impressive on beam—we love her side aerial to Onodi series.

Jordan Chiles, who will join the Bruins this fall, looked fantastic and could be a serious contender for one of the four Olympic spots. She has the skills and the confidence to become an all around star at UCLA, but her vault and floor will be especially important. Her double-twisting Yurchenko on vault and her double layout on floor could earn her perfect 10.0s as a freshman.

We’re happy to see that Emma Malabuyo, also in the class of 2021, is alive and well! And we’re especially pleased to note that her lines on beam are as good as ever. The Bruins will need them!

Emily Lee and Ciena Alipio, in the classes of 2021 and 2022, respectively, didn’t have a mistake-free competition, but they showed once again how much they’ll help out the Bruins, especially on beam.

We can’t tell whether or not Kara Eaker, in the class of 2021, will make the Olympic team, but we’re certain that she’ll become an NCAA star. Her gymnastics is so clean, and although her tucked Yurchenko 1.5 is quite useless in elite, it’s a 10.0 start value in college.

Grace McCallum also looked good given the hand injury she sustained last January. Similarly to Eaker, her chances to make the Olympic team remain unclear, but her gymnastics will score well in college. Could we please see her split leap to side aerial to layout step-out next year, please?

Side note: We can’t wait to see Utah add two more side aerial to layout step-out series on beam next year. This is what the fire emoji should be reserved for!

Sunisa Lee had falls on both bars and beam, but aside from that her routines looked as spectacular as ever. Her form is so good that we can’t wait for her to show it off with easier routines in college.

Aleah Finnegan, in the class of 2021, replaced her Yurchenko double with a Yurchenko 1.5. It’s not great news for her elite career, but it looks perfect for the Tigers’ lineup. Her candle mount with half twist on beam is also original. Plus, could LSU wear her purple leotard, please?

We’ll probably repeat this ad nauseam in the next few months, but Jade Carey, who’s already a student (though not an athlete) at Oregon State, will be so much more than a vault and floor specialist in the NCAA. Her bar work is becoming especially exquisite!

Watch out for 2022 graduate Kaylen Morgan! Her lines on bars may not especially stand out in elite, but they certainly will in the NCAA. Her handstands and Maloney to Pak salto combination are fantastic. Her double Arabian with perfectly pointed toes on floor is also stunning.

Alonna Kratzer, in the class of 2021, will bring a big Yurchenko 1.5 to Columbia to add to those of incoming freshmen Jocelyn Moore and Amari Celestine. These three athletes could revolutionize the Tigers’ vault lineup.

Skye Blakely had an unfortunate fall on beam, but the quality of her gymnastics makes her one of the best athletes in the class of 2023. She will get a lot of NCAA offers. We were also obsessed with her black and pink leotard.

Konnor McClain, in the class of 2023, was not quite herself, but her lines are really beautiful. Which NCAA coach wouldn’t want an athlete like that? She wore a black and green version of Utah’s national final leotard; the design is lovely, so it was pretty in these colors, too.

Anya Pilgrim, also in the class of 2023, stuck a beautiful double Arabian on floor. Her great lines will make her a top recruit, too.

Katelyn Jong, in the class of 2024, dominated the junior competition with a 54.750. Jong, who was third at the Hopes championship in 2019, showed off polished routines on all four events, which, thinking ahead, will score very well in the NCAA, too. Her Yurchenko double, which won her the Winter Cup title in February, is beautifully executed, but especially impressive are her standing full on beam and her back-to-back Silivas and full-in on floor. On bars, her full-out dismount is a beauty.

Kailin Chio, the American Classic champion and in the class of 2024, took second with an impressive performance despite a fall on beam and an out-of-bounds on floor (51.750). Her gymnastics screams NCAA, and we cannot wait to see her commit to a top school next year. Her Yurchenko 1.5 could already make Michigan’s or Oklahoma’s vault lineups, and her back handspring mount to back handspring to layout step-out series on beam is fantastic. Her floor work is also impressive. Her open full-out is gorgeous and so is her triple twist.

Gabriella Van Frayen, in the class of 2025, who also competed at the Hopes championship in 2019, was third with a 51.700. Her routines still seem to be transitioning from level 10 to elite, but she has tons of potential and her form is very good. Extra point for her beautiful silver leotard!

Van Frayen’s clubmate Izzy Stassi, in the class of 2026, notched her ticket to nationals with a 51.350 for fourth place. Her gymnastics looks really mature for such a young athlete, so barring injuries, we expect big things from her in the future. Her lines on bars are super clean, and on beam she impressed with a candle mount with a half twist, the same skill Finnegan performs.

Kaliya Lincoln, in the class of 2024, won a well-deserved floor title (13.600). The power she generates reminds us of a young Simone Biles, so we expect big things from her in the future, too. Her double layout, punch front through to double tuck and full-in dismount are sky-high and all have air time for an extra twist in there. Her Yurchenko 1.5 on vault was also stunning.

Tiana Sumanasekera, in the class of 2025, is another athlete whose gymnastics looks more mature than her young age. She took second on beam with a beautiful routine (13.400), which included a back handspring to back handspring to a sky-high layout to two feet. She’s also made for college gymnastics.

Kielyn Finnell, in the class of 2026, won the Hopes 13-14 all around title with a 51.200. With stunning form on all events and seemingly effortless performances, she’s pure joy to watch. Plus, she has a stunning choreography on floor. Claire Pease, who is coached by the Liukins, won the Hopes 11-12 title despite a fall on beam (50.050). She still looks like a raw diamond, but her lines are also beautiful, especially on bars and beam. Tyler Turner, who won silver in the 11-12 category, became a fan favorite after competing in a Black Lives Matter leotard.

Florida signee Riley McCusker injured her foot on her vault landing and had to scratch the rest of the competition. Hopefully it’s nothing serious and she’ll have a fair shot at making the Olympic team.

Oklahoma commit Faith Torrez and Auburn commit Lyden Saltness, both in the class of 2022, were scheduled to compete but didn’t show up. We hope they’ll be good to go for nationals.

Ella Kate Parker, in the class of 2026, got injured on vault after attempting a difficult Yurchenko double. The road to elite and NCAA success, and even the Olympics at her age, is still so long that there’s no reason to push them hard this early.

READ THIS NEXT: Future NCAA Gymnasts Shine at 2021 Level 10 Nationals