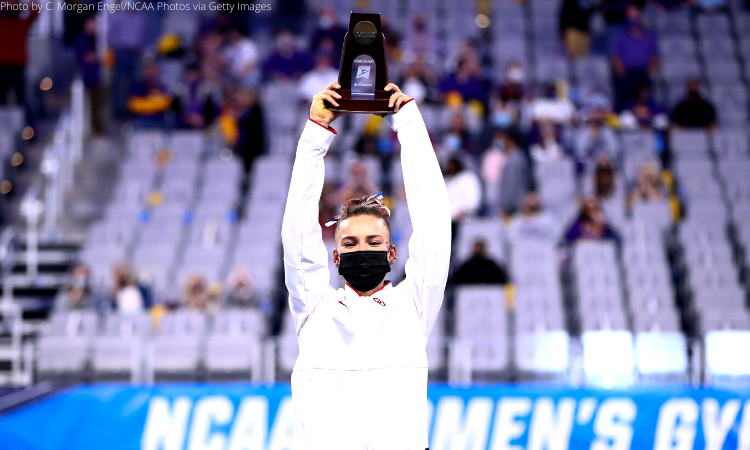 Anastasia Webb stuck her Yurchenko 1.5 to close out a stellar night for both herself and the Sooners. Her score—a 9.9750—was enough to tie her with LSU’s Haleigh Byrant for the national vault title and secure the all around crown. By the time she landed that vault, it was clear that Oklahoma would advance to the national final tomorrow evening.

After a rockier-than-usual start on bars, including an uncharacteristic mistake from Ragan Smith, the Sooners powered through beam. Both events were without lineup standby Karrie Thomas, who was injured at regionals.

The Sooners moved to floor, where their weakest event of the season became their best of the semifinal. Evy Schoepfer put up a career-high 9.9375 in the second spot.

“That was a pivotal routine for us,” KJ Kindler said.

“I could tell in Evy Schoepfer’s eyes that she was having a blast. She is an amazing gymnast, amazing hard worker and she deserves that all-time high. I can’t wait for what she has tomorrow,” Webb added.

Emma LaPinta was critical, too. Her hair ribbons fell into her face during her opening triple full and were distracting throughout the routine. “Getting through that routine was important once we saw that distraction was there,” Kindler said.

Webb, who is a 10.0 on floor away from a Gym Slam, notched a 9.9625 of her own on floor for a share of that national title. She has blossomed into a leader for the team over this difficult season. “I just hold myself [with] a little bit more confidence, and I have trust in my training,” she said.

Utah’s big turning point of the day came on bars after a rocky start on beam.

“I think we were all a little nervous,” Maile O’Keefe said. “I got a little frustrated and upset, but I can’t do anything about that.”

Tom Farden and his staff pulled his team aside after the shaky rotation. “We brought them together and told them that we’ve got three events to go. Everybody’s got to do all the events, and you don’t know where this is going to go, so why don’t we give it our best shot?” he said.

The Utes were galvanized heading into floor in the second rotation, rallied not in small part by O’Keefe’s 9.9625. She tied Webb for that national title. 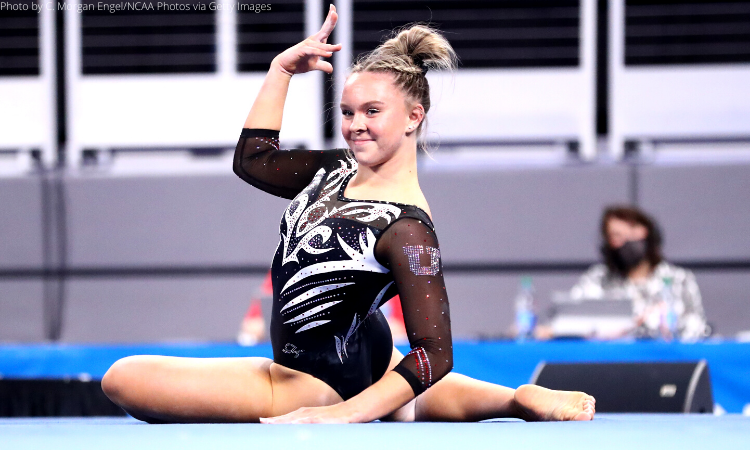 Vault was another weaker event, with some messy landings. Before starting bars in the final rotation, senior captain Sydney Soloski gave the Utes a pep talk. “That pushed us over the edge,” O’Keefe said.

Farden is proud of all of his senior leaders, who are all needed by the team in different situations. “Sydney is very vocal. Lexie [Burch] is one that a lot of athletes gravitate toward because she’s kind of a grinder, and then Emilie [LeBlanc] is like a big sister to them. She’ll put an arm around them and use some compassion,” he said.

Soloski’s pep talk worked. After Cristal Isa closed out the stellar 49.5125 bar lineup, the team had to wait and watch. It stood by as LSU’s Reagan Campbell missed the score she needed to overtake the Utes. It all came down to Lexi Graber’s floor score for Alabama.

In the silent arena, both teams held hands and waited. The Utes held their breaths. When Graber’s score came in, it wasn’t enough for the Crimson Tide. Utah advanced.

“We gathered around and said, ‘Nobody out-toughs us,'” Farden said. Toughness is what the Utes will bring to tomorrow. 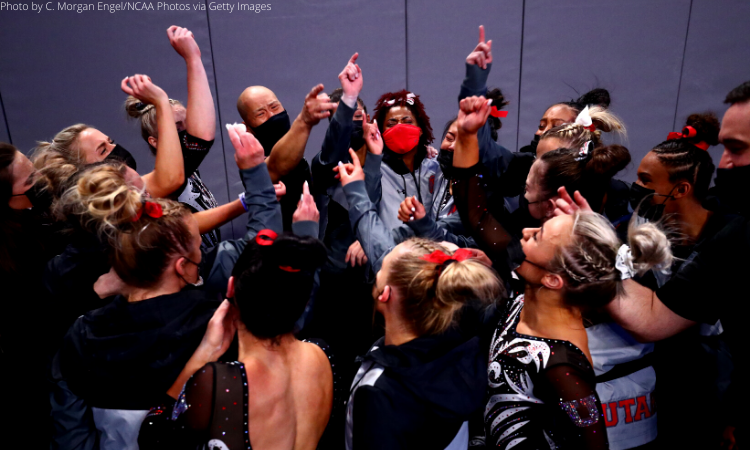 Despite Oklahoma scoring the only 198-plus number of the semifinals, Kindler still sees room to improve. There are vault landings, Smith’s bars and some beam things to clean up. Webb hasn’t decided yet if she’s taking her year of COVID eligibility. Her focus is 100% on the task at hand: winning the team title.

READ THIS NEXT: Florida, Michigan Overcome Postseason Demons to Qualify to National Finals

Like what you see? Consider supporting our efforts throughout the year! 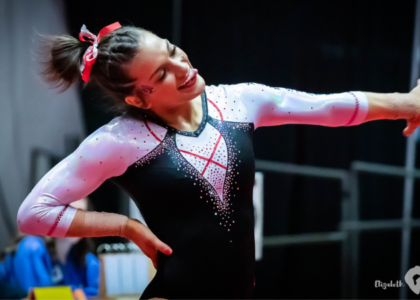