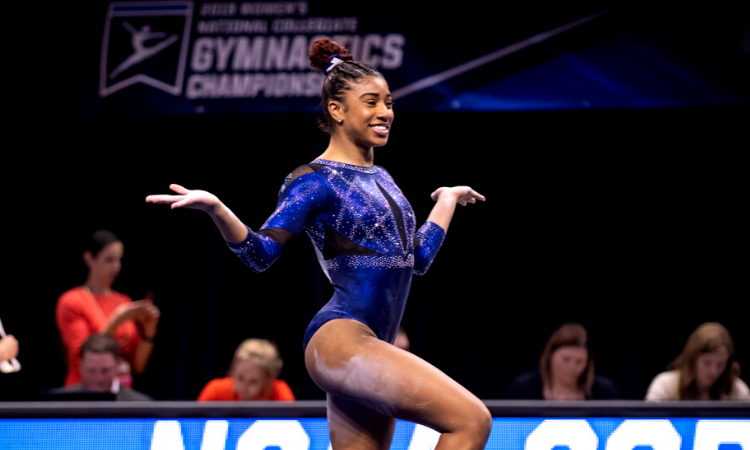 After a 10-year drought of NCAA finals appearances, Michigan sailed through Friday’s first semifinal in Fort Worth, scoring a 197.8625 that led the nearest team by nearly four tenths. For a team accustomed to postseason hardship, the result was monumental, but the Wolverines feel that the challenges of the last two years prepared them to withstand the pressure.

“The season as a whole has shown how much things can change. There was a point in preseason where you’re like, ‘Oh my god, are we gonna even have a season?’ So I think we were just prepared for this because it’s been something that we’ve been working for for almost two years,” Sierra Brooks said. “I’m a sophomore. We’ve had that taken away from us last year, so coming in this year we’ve done all the prep in the world.”

The team hasn’t forgotten the painful moments it’s overcome, including the cancellation of the 2020 season just before postseason, but it’s able to accept those feelings and move on without dwelling on them.

“Last year we felt like we had an incredible team, and we were positioned to come in and do this very thing and then we had the season pulled out from under us,” head coach Bev Plocki said. “I don’t have any hesitation whatsoever thinking about the past, but we are completely in the present and thinking about the opportunities we have in front of us tomorrow.”

Having perspective about the importance of each successive postseason meet has been key to controlling nerves for the Wolverines.

“We came in today with probably the best energy possible,” Brooks said. “We didn’t really overhype the meet or get overwhelmed at any point.”

Having achieved the most elusive goal, the pressure is off now as the Wolverines face a final in which no athlete on the team has ever competed.

“We deserve to be here, and we feel like if we hit to the best of our ability in four events, we may be the team to beat,” Plocki said.

As Michigan cruised, struggles on vault and bars led Florida to a nailbiting finish. The Gators ultimately defeated California by a three-quarters of a tenth, but not before an agonizing wait for the Bears to finish beam and record the final scores.

For head coach Jenny Rowland, the mistakes and imprecise landings indicate nervousness, but she isn’t worried about Florida’s ability to shake it off before tomorrow.

“Listen, we did what we did today, and it is what it is,” she said. “We’re going to control what we can control, and we’re going to continue to move forward. We’re going to compete with a lot of pride and joy for the Gators and for each other and hopefully just be a little bit more relaxed.”

The intensity of the meet wasn’t solely because of errors on Florida’s part. Having failed to qualify to the championship in 2019, this is the Gators’ first experience competing as a team in the new, merciless postseason format in which only two teams from each semifinal can advance to the final. While the stakes were made abundantly clear to her today, Rowland is still a fan of the change and the intensity it brings to each session.

Junior Nya Reed is part of a class of Gators that has never competed at the national championship before, having missed qualification in 2019 and then suffering the cancellation of the 2020 season. Her emotions ranked high today too, as she faced an opportunity she’s twice missed out on.

“We’ve gone through so much adversity from my freshman year to now. My freshman year, we didn’t even make it to NCAAs, and then everybody’s season got taken away from them last year. It’s just a great honor and my team was filled with joy throughout it,” Reed said. “When you focus on having fun in the sport that you love, you do better. You don’t have to worry about being nervous, you don’t have to worry about changing anything.”

As with Michigan, Rowland felt that the struggles her team has faced in the past two years contributed to their resilience under the highest pressure.

“On all events we had each other’s back, and I’m just really grateful that they kept fighting, that they were gritty and that they persevered today.”