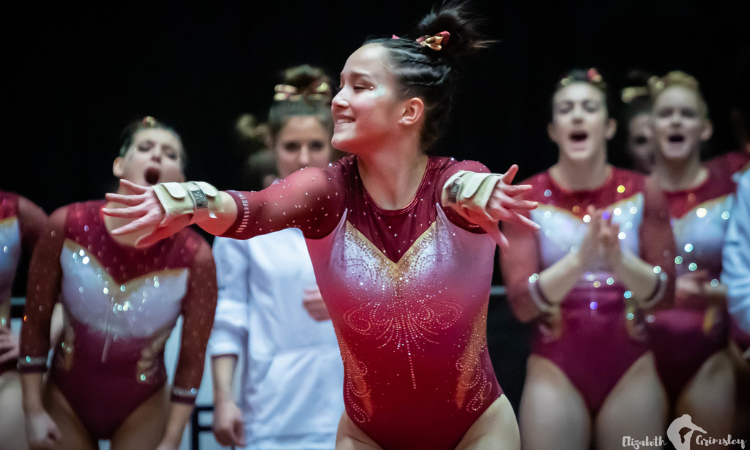 It’s day two of regionals in Athens, Georgia. As all eyes are on No. 1 Florida and on the battle for second place between Illinois and N.C. State, few notice that sophomore Hannah DeMers and junior Morgan Tong are making history for Central Michigan, the fourth team in the arena.

With two career-high scores of 9.925 on bars and beam, respectively, DeMers and Tong clinch their first individual qualification to nationals, becoming the only 12th and 13th Chippewas to achieve such a result, as well as the first since 2018.

Central Michigan entered regionals as the No. 25 team in the country, its best ranking since 2015. Among the goals the team had set for itself at the beginning of the year was that of qualifying to nationals, but with a roster of 14 of 19 underclassmen, the Chippewas took the competition as a learning experience.

“For a very young team who had never been to a regional before, the concept for us was about our individual focus as a team, staying centered on ourselves and our bubble and just doing our best gymnastics,” head coach Christine MacDonald said.

The athletes, she added, “did a tremendous job of backing each other up and bringing that energy from event to event,” which was instrumental in setting up DeMers and Tong for their big performances on bars and beam.

Their qualification, MacDonald said, “has the strength of a team. When all the routines are hitting, it makes it easier for the anchor spot to be able to showcase their best gymnastics and not feel that pressure of managing their gymnastics.”

All arounder DeMers was fifth up on bars in the third rotation. She hit a gorgeous routine, which included a sky-high Tkatchev, a bail to handstand and a stuck full-in dismount. Her beautiful bar set, she explained, was not accidental. Rather, it was the result of a process of working on her routine all year long. “It was just another weekend, and it was at the right time,” she said.

Her Tkatchev boasts one of the best executions in the nation, but it took a while for DeMers to master it, as she struggled to keep it under control until her junior year of high school. “For the longest time when I was training my Tkatchev, I would throw it so far over and it was so big that I couldn’t control it,” she said. “In a lot of my gymnastics, I had to learn to control my energy and my power, how to relax and not overthink, and do what I know how to do and trust my gymnastics.”

At regionals, then, she focused on the details of her bar routine and let her muscle memory do the rest. Later, she kept the same mindset going into beam, the final rotation, scoring a 9.875 and setting up Tong, the anchor, for a great set.

Tong waited the entire meet to perform her only event, but she kept her poise. “I was happy about my performance and how I handled myself in the situation,” she said. “I knew that if I worked my routine as I normally do, the score would come, so I was really focusing on doing what I know how to do.”

Her main goal was to hit her best routine for her team, as she described her exceptional beam work as the result of a team effort. “I feel like all my teammates really set me up to have a good routine,” she said. “We built on each other’s routines and everyone had each other’s backs. I feel that that contributed to our performances as well.”

Although the team was their priority, DeMers and Tong were thrilled to find out that they had qualified to nationals as individuals.

“The whole team was just focusing on being there with one another, having each other’s backs and having a great time,” DeMers said. “Everything else was not even a thought, and I was shocked [when I found out about it]. I had no idea, though it was really cool how it all worked out. It just shows that if you’re having fun, so much comes with it.”

“I was really grateful to have the opportunity and I know that everyone around me has helped contribute to my qualification, especially Christine and my teammates, and I was happy that all my hard work paid off,” Tong added. “And I was also really happy to hear that Hannah had qualified, too.”

The last CMU gymnast to qualify to nationals was Denelle Pedrick in 2018, who was a senior when Tong was a freshman. Pedrick inspired Tong to do her best every day in the gym and to strive for big goals in gymnastics, and the two are still in contact today. “Denelle was someone who would work hard every day and she would sell her performances, and I was always inspired by how dedicated she was,” Tong said.

At nationals, DeMers and Tong will represent the Chippewas’ present achievements, as well as their expectations for the future of the program. “It’s really important because it’s the culmination of a team effort and the team goals that we set at the beginning of the year,” MacDonald said of her gymnasts’ qualification. “Whether it’s one, two or a whole team getting to nationals, it’s the final stage where we want to be as a team.”

“I couldn’t be more proud of them, their passion and their commitment,” she added. “They’re the whole package: They’re great student-athletes, great gymnasts and great role models. They’ve overcome so much adversity to get to the point we’re at. It is really exciting to finally be back [at nationals] and to continue the passion and drive that these young women have.”

For both the athletes and the coaches, this year was a learning experience, and they hope to use the lessons they have learned, as well as their trip to nationals, to grow even more as a program in 2022.

“This is just a stepping stone of where we want to be as a team in the upcoming years, so with everything we’ve learned and overcome this year, it’s about putting more in our backpack to be more successful in the future,” DeMers added. “We’re really excited to be a force to be reckoned with in the whole national scheme of things.”

READ THIS NEXT: Kentucky Strives to Make Nationals in 2022 After Near-Miss at Regionals