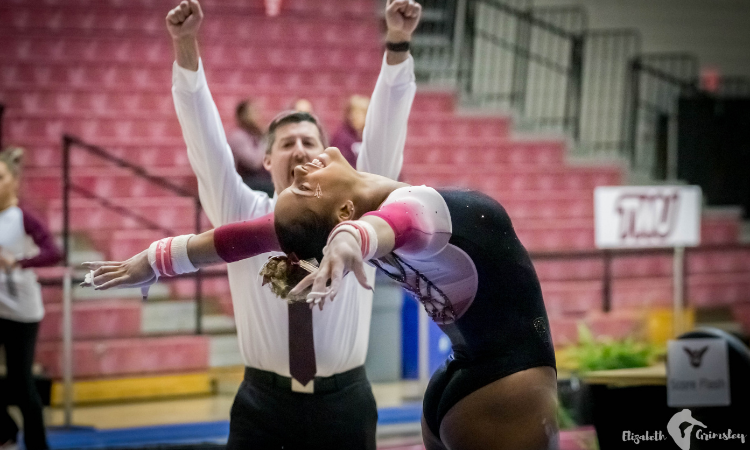 After the 2020 season was abruptly cut short prior to the postseason and with the coronavirus on the minds of everyone throughout the summer, it was easy to adopt a negative mindset heading into 2021 with so much uncertainty. However, down in Tempe, Arizona, the Sun Devils gymnastics team was busy focusing on a new mindset for the upcoming season.

“Every day we get to be in here it’s lucky because we don’t know when it’s going to end,” said senior Cairo Leonard-Baker, who will represent Arizona State on bars at nationals this weekend in her third championship appearance. “That’s the reason we had such a successful season. We changed our mindset around the whole COVID competing situation.”

Adapting that mentality paid off in a big way for Arizona State this year, as the team had one of its most successful seasons in school history. The Sun Devils were able to finish ninth in the country as a team, record a team score above 197 for the first time since 2006 and qualify a duo of gymnasts for this weekend’s NCAA championships.

“We really tried to keep our expectations in line with a normal year,” said associate head coach Jessica Santos, who leads the program alongside husband and head coach Jay Santos.

“We didn’t want [coronavirus] to be the excuse.” Jay Santos explained. “These are things we have to do. We have to train a little different, we have to space out, we’ve got to socialize a little different. But teams that commit to doing it well and just accept that and adapt, teams like that are better suited to have success this year. That’s one thing we tried to do all year long.”

From training in pods of six all season, finding new and creative ways to socialize as college students and even Leonard-Baker occasionally waiting for the next elevator at her apartment complex to avoid maskless neighbors, there is no doubt the Sun Devils were presented with challenges nearly every second of the day. While this would be debilitating for some, Arizona State embraced it.

“Sacrifices had to be made, but it definitely paid off in the end,” sophomore Hannah Scharf said. Scharf is the second of the Sun Devils’ NCAA qualifiers and will be making her championship debut in the all around. “We all just had to keep in mind what the bigger goal was and what we wanted more. Did we want to see different people or did we want to continue training and working towards those goals we had.”

The cohesiveness of the team working toward a goal is something both Santoses credit as a big factor in their ability to rebuild this program. The Santoses took over in the summer of 2016 after Arizona State had finished the season ranked 51st in the nation. They almost immediately brought the team to consistently finishing in the top 30, and have already ascended to the top 10. Leonard-Baker played a significant part in that success as well, leading alongside the Santoses despite committing to the Sun Devils under the previous coaching staff.

“Cairo was kind of like the spark four years ago that really helped us get this thing going again,” Jay Santos said. “She came in with so much competitive drive and just passion for what she was doing. She has grown so much as a leader over four years. To witness that, see that and watch her go from a freshman who’s just doing her thing to now a senior who’s trying to help freshmen along and teach them how to go about things is just fantastic to see.”

And Leonard-Baker had plenty of compliments for her coaches as well.

“I have grown so much under Jay and Jess. They treat you like the adult that you are,” Leonard-Baker said. “I wouldn’t have done as well as I did if I didn’t feel like I had coaches that always had my back in every situation. If they can take a team from 50-something to 20-something, they can do anything.”

Leonard-Baker has yet to decide whether or not to return to Arizona State with the extra COVID year, but aims to impress at nationals regardless. The senior is hoping to earn All-America honors for the second time in her career and potentially add some hardware to her list of accolades.

“I know that I have the capability to win a national championship on bars,” Leonard-Baker said. “Rotating with Cal, the top bars team in the nation, is going to be great for me. Watching them hit routine after routine after routine is going to be great for when it’s my turn to go up because it feels like they set me up great being the last person in their lineup almost.”

Fellow qualifier Scharf praised Leonard-Baker as both a leader and competitor, and gladly accepts her guidance heading into her first NCAAs after not getting the opportunity to finish out her freshman campaign last season.

“I wish it was our whole team going,” Scharf said. “I’m just really honored that I get the opportunity to represent ASU and hopefully make everybody here proud.”

Scharf’s performance at nationals will certainly give the Sun Devils momentum heading into next season with the young yet successful roster the Santoses have put together. With the incoming freshman class already expressing their intent to make nationals, the future looks very promising for Arizona State.

“It’s just been so much fun. We’re so excited about our team from this year moving into next year. I just think we’re going to keep getting better,” Jessica Santos said.