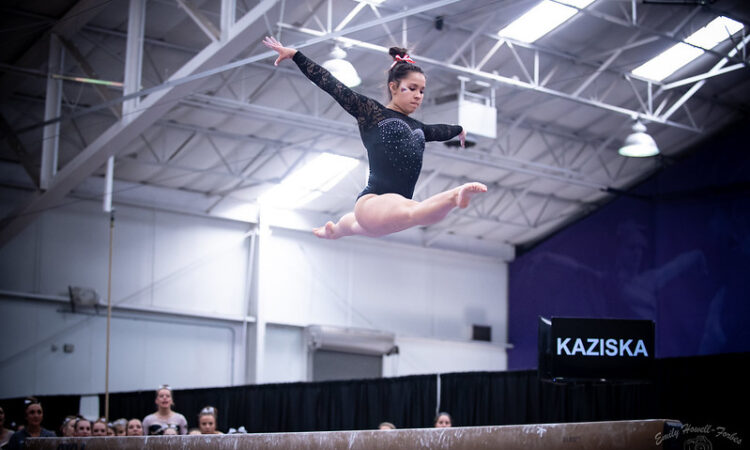 SEMO’s upset win over Lindenwood was the great story of the weekend at the USAG championships, but the success at home didn’t stop there for the Redhawks. No. 1-ranked Dahlia Solorzano-Caruso won the all around title, and Anna Kaziska also delivered on beam. Texas Woman’s struggled in the team final, but its strong individuals earned two event titles. Air Force peaked at the right time and achieved a season high in the team final while Centenary sophomore Taylor Ann Wilson won the bars title in a jaw-dropping upset. On the other hand, while Lindenwood didn’t lack individual accomplishments, walking away with no titles has to be considered a mild disappointment for the Lions given the strength of their position heading into the championship.

Three beam falls in the third rotation by favorite Lindenwood opened the door for SEMO, but the meet was close until the end, with Lindenwood leading by 0.075 heading into the final rotation. In the end, it wasn’t mistakes by others that sealed the win for the Redhawks but rather a program record-tying 49.375 on beam led by a 9.900 from Anna Speller and a 9.925 from Anna Kaziska. Air Force delivered a great season high performance to upset Texas Woman’s for third, and while bars issues kept the Pioneers from contending in the team standings, they still registered a great 49.275 on floor that ranks second in program history.

Not many USAG gymnasts have regularly competed the all around this year. Only Daija Stevenson had a chance to challenge a clean meet from Solorzano-Caruso, and when Stevenson fell on bars, it was clear what the outcome would be. Centenary’s Kendall Sanders had a chance to register a career high in the all around but unfortunately fell on her very last skill of the meet, a double layout bars dismount.

It’s always tough to differentiate between a long string of Yurchenko fulls, but freshman Madeline Gose’s excellent form and open body position set her apart on this event and led her to a maiden USAG national title. Since she finished second or better in all three events she competed this year, it’s easy to imagine more hardware coming her way in the future. Superior amplitude carried Tyler Davis and Aleah Leman to the other podium positions.

After missing almost the entire 2021 season with illness and entering the weekend with a career high of 9.150 on bars, Wilson led the Ladies on bars in Saturday’s team final and then stunned with a 9.875 for her Maloney-Pak routine on Sunday. It’s impossible to overstate how much of an upset this result is for the sophomore. Maddie Griffith has been sticking her full-twisting double back dismount all season and repeated the feat on Sunday. Solorzano-Caruso scored a season high on bars to tie teammate Jolie Miller for third place. No. 1-ranked Courtney Mitchell unfortunately couldn’t contend after a mistake on her clear hip forced her to take some empty swings.

After finishing second on beam in 2019, No. 1-ranked Kaziska was victorious this time around in a competitive field. Hadley Roberts’ triple series, Alana Fischer’s double turn and Gose’s fantastic form made this final extremely competitive and fun to watch.

In another tightly contested final, junior Isabel Goyco came out on top with her second consecutive 9.925 on floor. Teammate Gose and 2019’s runner-up Kaziska tied for second while Solorzano-Caruso finished just out of podium position with a 9.862.

Click and expand the events below to see results and even links to watch archived broadcasts.

USAG Nationals Team and All Around Final

READ THIS NEXT: LIVE BLOG: USAG Nationals Team and All Around Final