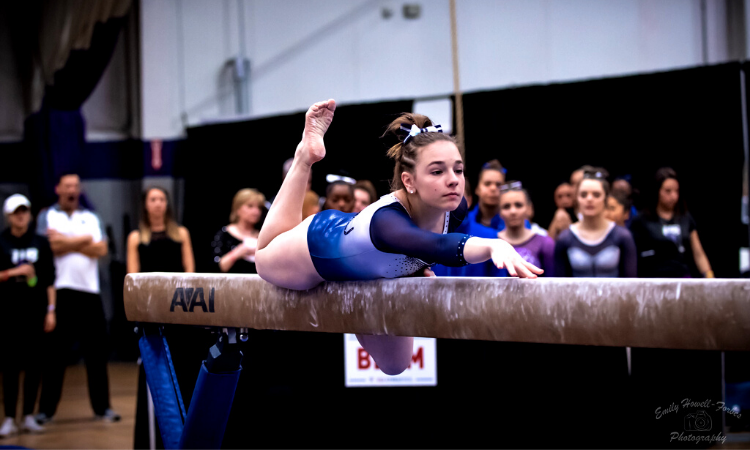 In early fall, we had a chance to talk to three Division I coaches and ask about COVID-19 safety protocols. It was an enlightening conversation about optimizing student-athletes’ health and safety and looking for creative ways to move forward in an uncertain environment.

However, not all programs have extensive facilities, high-end filtration systems or extra staff members to clean equipment after a single-use like many Division I schools. How have smaller Division II and III schools tackled the virus, especially with a limited budget?

Although the student body returned to campus in early August, Centenary did not start practicing until the end of the month.

At first, the gymnasts were in two groups. Head Coach Jackie Fain explained that the masks weren’t a big deal because in the beginning, they have to go more slowly anyway to get in essential conditioning.

Last month they moved to full-team practices, and Fain remarked how exciting it was. “It’s weird how it’s so different when you have half the team in the gym at a time and then when you get everybody there…it’s so much more exciting,” she said.

At Ursinus, the faculty and students use the Mobile U app to do a symptoms check every day. When gymnasts walk into the gym, they show Head Coach Kim Parsons Valenti, and it has to show green. They then get their temperature taken, which is required to be below a certain threshold before they can enter the facility.

To prevent overcrowding in a small space, the team is not using the team room. The coaches have strategically placed chairs around the gym, which have become designated stations for each gymnast. Their facilities and operations crew cleans and disinfects the stations afterward, using a fogging machine. The crew also uses the machine after each small group finishes an apparatus.

When it comes to masks, they’ve taken the approach that a student-athlete is masked when you enter and exit the gym, for a warm-up stretch and for any basics on the floor, such as lines and basic tumbling.

Valenti explains that while gymnasts are on bars, beam or vault, they can remove their mask as social distancing is already in place. If they’re flipping on the floor, they can take their mask off. But with everything else like warm-up runs or floor basics, they have to keep the mask on since the risk of them hurting themselves is much lower. After the student-athletes take their turn, they put the mask back on.

Valenti explains that they don’t wear masks on the apparatus because they recognize the safety aspect of the sport. “What if the mask comes over someone’s eyes? [There are a] wide variety of mishaps that can happen. Our sport is too dangerous to risk that,” she said.

At Southern Connecticut, Head Coach Byron Knox adds that they are following State of Connecticut guidelines and spacing out. The Owls typically practice in two gyms, bars and beam on one end of campus and floor and vault on the other. He also adds that there is a benefit to having two gyms during COVID-19. When they leave one gym, the crew can sanitize it so the team always has a sanitized environment.

They also have a full staff, typically splitting the gyms with one group at one and another group across campus at the other.

“During this COVID time, it’s ideal to have the two separate facilities. Whereas not many, not any, colleges have that sort of set up,” Knox said.

For Centenary, if the team can’t have a season, the conference has talked about keeping the gymnasts engaged in a virtual event—not necessarily a competition but something fun.

At SCSU, Knox reached out to a local college gymnastics team to see if it wants to do exhibitions between teams or do exhibitions together for student bodies at the universities. Another idea is for the Owls to virtually perform for a local youth group.

Knox explains that if they’re not able to compete, at least they’ll be able to perform.

As long as the Ursinus gymnasts are masked, the team can meet in person. Valenti shared that the team was recently excited to go apple picking, abiding by orchard guidelines and restrictions. The team has also bonded over its Instagram Story, filled with throwback Thursday photos of all of them as children doing gymnastics.

As far as season expectations, all three teams are hopeful yet also realistic.

“In the Division III world, you’re doing the sport because you love it,” Valenti said. “My team hopes for the season, but we’re also coming to it with realistic eyes and recognizing that if we do not have a season, we will make the best of it.”

She can’t praise the team enough for its optimism, especially the senior class. “They’re walking into this year, not knowing if we’re going to have a season but approaching every day, every meeting with me as an opportunity to continue growing and bettering themselves.”

The team is staying positive, but that doesn’t stop Valenti from wondering what will happen come 2021. “We [want] those making the decisions to have the most up-to-date information. I’d rather them wait and make a better-informed decision, again, with our student-athletes’ safety and well-being in the forefront, than rush to a decision,” she said.

Fain recognizes her team has mental exhaustion. However, she notes the Ladies have been positive and outstanding, never complaining and always thankful for every time they get to be in the gym, whether with masks or in two groups.

“They just get in and do what they can, so they’re working through it,” Fain said.

Knox observes his frustrated seniors because of their on-and-off training, the back-and-forth shuttling between gyms and random campus members testing positive, resulting in a temporary shut down on all athletics.

“They’re feeling like, ‘Will there be a season? Are we training in vain?’ I haven’t done certain things consistently in weeks, and it’s frustrating, so this is abnormal for them.”

One thing Knox has done differently in this year is taken a more hands-on approach to spotting, which may seem counterintuitive when it comes to social distancing. But with proper safety measures in place, he believes hands-on spotting gives the athletes reassurance. He strongly believes now is the time to do it because he wants them to feel good about their well being, safety and skill set timing come competition.

“It’s about reassuring the students because they’re not in the best place,” Knox said. “Every time we turn around, especially in the news when we hear about the negative part of COVID, it can be overwhelming. The positive outcome is you can still do gymnastics safely. You can still keep a skill set. We just can’t perform in front of a big audience.”

At Ursinus, the team engages with each other and the community, although not always in person. At the college, there’s been a push for more growth programming.

Since returning to campus, the team has had a session with the director of prevention and advocacy and met with the diversity and inclusion officer. They gymnasts look for ways to improve their health, with a nutritionist recently speaking to them. Like many college athletic programs across the country, there was a push for voter registration last month.

Their philosophy is that if they cannot compete as a team, they will still find a way to grow.

“At the end of the day, they’re there because they love it, which is what I love too,” Valenti said.

READ THIS NEXT: As Teams Return to Campus With New COVID Protocols, Coaches Are Optimistic for a 2021 Season