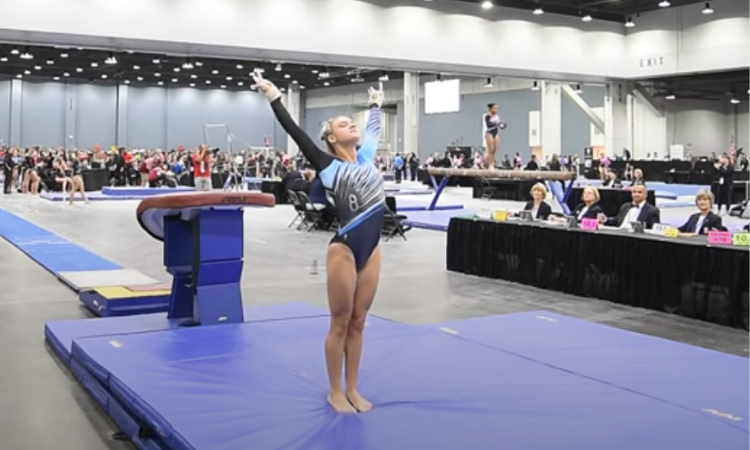 While the sudden end of the 2020 season was unexpected and painful, it’s easy to forget the heartbreak at the beginning of the season when several of the freshmen we had been looking forward to seeing in college announced season-ending injuries before they had a chance to make their debuts. With star freshmen such as Kiya Johnson, Sierra Brooks, Ragan Smith, Maile O’Keefe and Helen Hu having stellar seasons, it’s easy to forget about the injured gymnasts who could have made this freshman class even better. It’s time for a reminder of some of those gymnasts we should be excited to see (finally!) make their debuts in 2021.

UNC was in contention to make regionals this year partly due to the fantastic all around performance of EAGL Freshman of the Year Elizabeth Culton, but imagine what could have been with a healthy Hallie Thompson as well! Thompson’s J.O. scores were remarkably consistent during her last year of high school, culminating in a vault title and a fourth place all around finish at J.O. nationals. That consistency will be welcomed by the Tar Heels who have been plagued by the opposite in recent years. Her vault and floor will be particularly exciting to watch in the absence of departing senior Khazia Hislop.

It’s a shame we couldn’t see Zivat’s huge double layout deep in the 2020 MSU floor lineup where it belonged, but don’t overlook her 10.0-start-value Tsuk full which won her a vault national title in 2019. She should be able to immediately fill holes left by graduating senior Gabriella Douglas on those events.

Another former national champion on vault to make this list, Henderson has a gorgeous Yurchenko full reminiscent of Khazia Hislop and Nia Dennis. Her floor routine combines huge, controlled tumbling with beautiful leaps. She could be anchoring both events come 2021, but don’t overlook her potential on beam as well.

Rucker has not competed since 2018 due to injury, but her last performance included a national title on vault and a second place overall finish at J.O. nationals. If she is healthy in 2021, her presence will be especially welcome in the vault and floor lineups, where the Utes took slight steps back in the 2020 season compared to 2019. However, Rucker is a true all arounder and has star potential on bars and beam as well.

A five-time J.O. nationals qualifier, Waligora won the all around and floor titles in 2017 and twice finished runner-up on bars. Her most likely contributions in 2021 will come on beam and floor, though she has potential to be an all arounder for the Crimson Tide.

We’re cheating slightly by including Murphy on this list, since she competed in one meet before being sidelined by injury for the rest of the season, but she does qualify for a medical redshirt. She wrote her name in the WMU record books during that one meet, putting up the Broncos’ 12th-highest all around performance of all time with a 39.175. We’re particularly excited to see her compete beam and floor again.

Floor was easily Stanford’s best event in 2020, and Stonecipher’s return would make the lineup even stronger. A former national champion on the event, her aggressive style will thrive in college gymnastics. We also hope to see her one-handed back handspring through to double tuck beam dismount make a debut in 2021, and we would love to see her Comaneci on bars as well.

Poniewaz vaults a clean Yurchenko full that could easily make the OSU lineup, but her biggest potential is on floor where the Beavers are losing star senior Isis Lowery.

A former Canadian elite, Chrobok could potentially make the lineup on all four events. She has clean lines and multiple release options on bars, and she could add depth on floor with her powerful tumbling.

Another former Canadian elite, Takagi has instant all around potential. She vaults a handspring front pike half that should easily make the back half of the vault lineup, and her clean lines on bars will be an asset as well. Her beam routine is difficult and elegant at the same time, and she has a sky-high double back on floor.