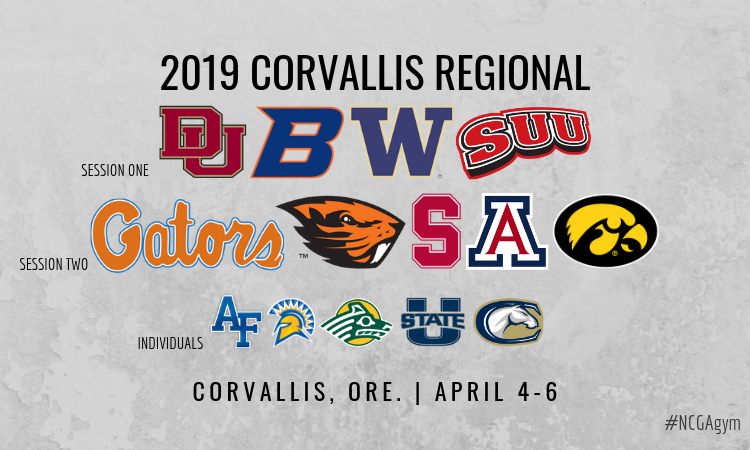 Today we’re taking a look at the Corvallis regional. Thursday will feature No.32 Iowa and No. 33 Arizona in round one. Friday we jump into round two action with No. 5 Denver, No. 12 Boise State, No. 18 Washington and No. 24 Southern Utah competing in the afternoon session and No. 4 Florida, No. 15 Oregon State, No. 25 Stanford and the winner of round one in the evening session. Two teams from each of these Friday competitions will advance to round three on Saturday where the top two from that meet make it to nationals.

Finally, don’t forget to enter your postseason predictions in the 2019 bracket challenge! The deadline for submissions is today, Wednesday, April 3 at 7 p.m. ET. Once you enter, you can follow your progress here.

How to Watch: Pac-12/Flo Stream

It’s difficult to make a strong argument in favor of either team here, and the razor-thin margins in their stats certainly don’t help. Iowa had a slower start to the season, languishing in the vicinity of No. 40 in the rankings until around the midpoint of the season while Arizona has been more consistent through the year. The Wildcats will need to bounce back from a disaster meet at Pac-12s that included four counted falls. Meanwhile, the Hawkeyes have had a stronger end to the season, but they’re marginally less reliable on the whole—they never really figured out beam.

In the both-teams-go-24-for-24 scenario, Iowa wins this one. Arizona has a lower ceiling, with more weekly technical deductions especially on vault and beam, while the Hawkeyes are cleaner and less consistent. They’re both very strong floor teams—Arizona is ranked No. 24 and  Iowa No. 21—and both can struggle on beam, so don’t expect to get a feel for which way this meet is going until the second half.

Both teams’ superstars are event specialists. Arizona’s Christina Berg has gone as high as 9.975 on bars as well as 9.900 on floor this year while Clair Kaji of Iowa has topped out at 9.900 on bars, beam and floor. Arizona’s resident Australian Maddi Leydin is a rockstar on three events, with an intermittent Yurchenko one and a half on vault and a Markelov on bars, and Erin Castle of Iowa does a can’t-miss floor routine to “Tequila.”

Denver has been one of the stories of the season, taking advantage of its two nationally ranked all arounders in addition to a rockstar freshman class to turn in two months straight of 197-plus scores. The Pioneers were scored fairly generously throughout the season, but apart from a vague hand-wave about maybe peaking too soon, that’s really the only reason to watch them closely this session. It should be a gimme.

Not so for Boise State, which only has a two-ish tenth buffer over Washington in NQS. Both teams are down star all arounders, with recent injuries to Shani Remme and Evanni Roberson, respectively, pushing the bottom line back. But the Huskies achieved their season high without Roberson, which could make a difference. Southern Utah has had a characteristically chaotic yet successful season so far, and the wildly talented Thunderbirds aren’t completely out of the game either.

If Washington is going to pull off the upset, it’ll need its early-lineup routines to pull through. Michaela Nelson and Meaghan Ruttan are still getting into their groove after joining later in the season, and they form the core of a group of routines that don’t always go 9.825-plus but will need to for the Huskies to survive past Friday. Vault landings will also be critical for the Huskies, who are capable of a 197 if they can limit the bleeding on their worst event. Scoring is also a factor in this dynamic. Washington is typically scored higher on the road than at home, so it should be fairly comfortable in Corvallis. Southern Utah spent most of March hanging around the 196 mark, and a recent injury to vault and floor specialist Molly Jozwiakowski doesn’t help things. But if the critical trio of underclassmen—Hannah Nipp, Shylen Murakami and Karley McClain—get the 9.9s they’re capable of, the Thunderbirds could creep back into the mid-196s and pass an average day from either Boise State or Washington.

Freshman Alexis Vasquez’ spectacular beam routine is worth watching in full screen regardless of what else is happening at the time. Washington junior Madison Copiak is a national qualifying contender on bars, where she’s gone as high as 9.975 this season, though she’ll have stiff competition from Emily Muhlenhaupt and Alexis Stokes from Boise State. Southern Utah has some spectacular beam routines, particularly from Shylen Murakami and Hannah Nipp.

This is a monstrous session for bars, with a total of eight competing athletes who have topped out at 9.950-plus this season. And two are individual qualifiers. MPSF champion Anna Salamone does a spectacular Gienger and could sneak into contention, but No. 12 Christina Berg should be a major focus. She’s the highest-ranked event qualifier in the whole country, and whether or not Arizona makes it through round one, she can compete with the best. On beam, don’t miss Alaska’s Sophia Hyderally, the No. 1-ranked beamer to qualify to regionals as a specialist (tied with Mia Lord of NIU). She has scored 9.900 three times this year and can go higher. All arounder Kelley Hebert of UC Davis would have to have an unprecedented day in the all around to contend for advancement there, but she’s phenomenal on floor and has gone as high as 9.950 this season.

Florida has had a quiet 2019 so far, spending nearly the whole season at an uneventful No. 3 before dropping behind rival LSU at the last second. That doesn’t mean that there’s reason to worry about the Gators though. They’ve been very consistent in 2019, turning in only two rotations below 49.000. Both of those were on vault, and if things go wrong, that’s likely where it will happen. Oregon State has proved it’s capable of mid-196 scores on its most tepid days, which should be enough to keep it clear of the bottom two teams, barring a beam disaster. Factoring in the healthy home scoring that’s often in operation in Corvallis, an upset is fairly unlikely in this regional.

Stanford has a similar peak to Iowa and Arizona, but it’s been far more consistent through the season. Any of the three can put up a mid-196 and pull off the upset, but it would likely take a counted mistake from Oregon State to make that any kind of likelihood. Like the two round one teams, Stanford has been consistently excellent on floor and has struggled intermittently on the other three. The Cardinal counted a fall on beam at Pac-12s and uses multiple 9.6- to 9.7-range vault scores as a matter of course.

This regional is all about floor, from the No. 3-ranked Gators all the way down to the individual qualifiers. Florida has four gymnasts ranked in the top 25 on this event, most notably No. 2 Trinity Thomas. They’re joined by two Oregon State standouts, Kaitlyn Yanish and Isis Lowery, both of whom can threaten for 10s on the right day. Stanford’s Kyla Bryant comes in at No. 28. The Cardinal also has some impressive and uncommon skills on other events, like Rachael Flam’s Omelianchik on vault and Taylor Lawson’s standing Arabian on beam.

Once again, the story is floor. Madison Ward-Sessions is ranked No. 16 in the country, topping out at 9.975 in her senior season. She’s made regionals in all four years she’s been in Logan, and it would be amazing—and not totally unrealistic—to see her qualify to nationals in 2019. Fellow all around qualifier Taylor Chan of SJSU is also a floor star, scoring six 9.900s so far this year and showing off a stunning piked full-in. Iowa freshman Lauren Guerin ties Chan for No. 40 on floor and has also scored six 9.900s on the event. (We have to imagine that the two of them and UCLA’s Katelyn Ohashi don’t have many companions in the My NQS Is The Same As My Season High Club.) The highest-ranked non-floor qualifier in this subdivision is Hawkeye Nicole Chow, who has topped out at 9.900 on bars, but it would be an uphill battle for her or any of the other specialists to make it out of Corvallis.

It’s hard to imagine Florida being in real danger. The Gators have skated under the radar in 2019 with the help of uncharacteristically tight scores and a lack of dramatic results (at least since the LSU win in week three). Fundamentally though, they have a significant technical buffer over the rest of the field and shouldn’t have a problem making it to nationals. It’s likely that Denver will skate through too, but it’s within range of a peaking Oregon State, especially with Corvallis known for its home scoring advantage. Both teams’ highest scores this season were accomplished under fairly generous scoring conditions, but Oregon State has a more reasonable expectation of being able to replicate them in the final day of a road regional. That said, the difference of nearly a point in NQS between the two doesn’t lie—it would take a very strange day for Denver to fail to advance here.