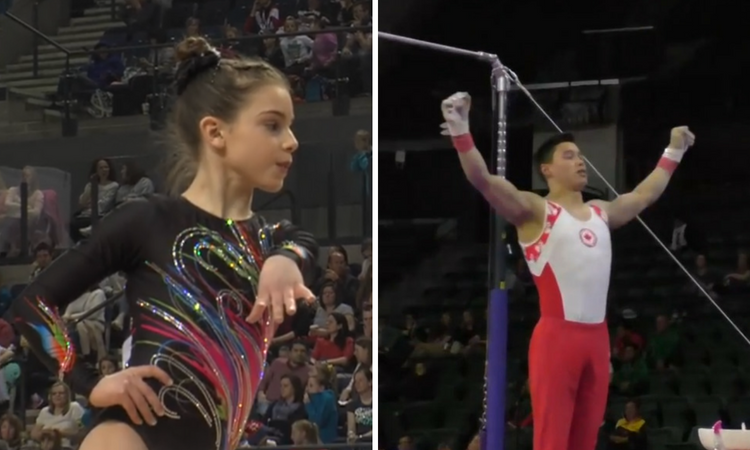 It was a busy month for elite competition around the world with a number of international and American NCAA prospect competing in meets from world cups to domestic selection camps. Take a look at how they fared.

Four current and future NCAA gymnasts were registered to compete at the European championships in Glasgow. Unfortunately, Seattle Pacific signee Lilja Olafsdottir suffered an elbow injury before the meet and was unable to compete for Iceland. Hopefully she’ll recover in time to stand out in Seattle in 2019.

Recent Pitt commit Natalia Pawlak represented Poland in the junior division, ranking No. 42 in the all around and leading the rest of the Polish squad. Regular readers of this piece won’t be surprised to learn that Amelie Morgan (California) and Phoebe Jakubczyk (Oregon State) were also in attendance, representing Great Britain. Jakubczyk had an outstanding meet, finishing fifth in the all around with a 52.366 and having outstanding execution scores. She walked away with a silver medal in the team event as well. However, Morgan was the shining star of the meet, winning five medals, including an all around silver—the best-ever performance by a British junior at the meet on both counts.

Recently, South Africa hosted the first African Safari competition. Pitt commit Zoe Simmons represented Wales at the meet, picking up a strong result with a 47.900 in the all around and sixth place finishes on bars and floor.

Canada recently announced its roster for the Pan American Championships in September, giving the nod to future Georgia gymnast Haley de Jong. Expect the United States to announce a team for this meet soon—it usually sends a B-team that is even more intriguing to NCAA fans than the worlds roster. UCLA alumna Danusia Francis is also working on raising funds to enter the meet, representing Jamaica.

Next week, three future NCAA WAG gymnasts will compete at the Asian Games: Tienna Nguyen (UNC) for Vietnam and Corinne Bunagan (Alabama) and Kaitlin De Guzman (Oklahoma) for the Philippines.

Meanwhile, international assignments are being announced for British elites, including several NCAA commits. Illinois-bound Amelia Knight was recently selected to the Leverkusen Cup in September, and we can expect more selections coming soon, including for the Youth Olympic Games in the fall.

Justin Karstadt, Canadian National Team member and rising senior at Minnesota, had a strong showing at the 2018 Mersin Challenge Cup in Turkey. At the meet, he placed third on pommel horse with a 13.350 and seventh on parallel bars with a 13.850.

Numerous NCAA gymnasts competed in the 2018 U.S. Men’s National Qualifier in Colorado Springs, Colorado. The meet was the last chance for men to qualify for the U.S. Gymnastics Championships, but many who were already qualified used it as a final tune-up. Michigan’s Cameron Bock won the parallel bars title and placed second in the all around with an 82.250, and Oklahoma’s Genki Suzuki placed third on high bar and in the all around with an 82.050. In all, 12 NCAA athletes qualified to nationals from the qualifier, bringing the total number of collegiate gymnasts on the roster to 26. Catch the final day of competition of nationals Saturday, August 18 on the Olympic Channel and NBC.

Six current NCAA gymnasts were named to the 2018 Canadian Senior National Team based on results from Elite Canada and the Canadian National Championships earlier this year. Jake Bonnay of Nebraska, Justin Karstadt of Minnesota, Aaron Mah and Darren Wong of California and Wyatt Tyndall and Samuel Zakutney of Penn State each earned spots.

Zakutney, a rising junior, and Wong, an incoming freshman, were also selected to represent Canada at the 2018 Pan American Championships. The competition will take place from September 11-16, in Lima, Peru.

Elites in the U.S. will be competing at nationals in Boston in mid-August. Three women and 26 men who are current NCAA athletes will compete for titles and potential world team spots alongside many other future and former NCAA stars. Check out our women’s and men’s U.S. Gymnastics Championships previews for more information.

READ THIS NEXT: Elite in the NCAA Roundup: March-June 2018