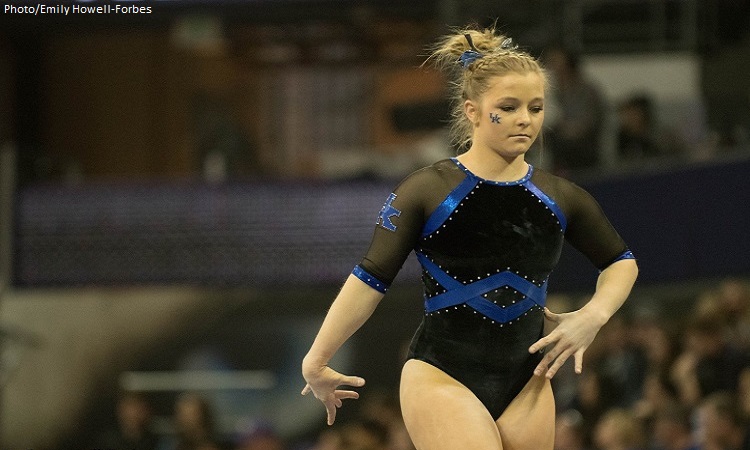 It would be an understatement to say that this one is a little lopsided. Kentucky has held a spot in the top 10 the entire season and has clinched a spot in the night session of the SEC championship. Vault is a question; the Wildcats can get a little too 9.7-y there for comfort. The big problem, though, continues to be beam. The team has had one beam fall (two of them by Alaina Kwan) in each of the last three meets. Maximizing scoring potential means eliminating that weekly mistake, something Kentucky will want cleaned up by SECs for sure.

For Illinois State, this year has been a challenge. A very big, very young roster has meant playing with lineups throughout the season. The team is led by all arounder and floor standout Gabrielle Cooke and a strong bar set from Anna Marema. Savannah Remkus is a capable freshman, especially on beam and floor, but she has been plagued by inconsistency. At the State of Illinois Classic Sunday against Illinois, UIC and Northern Illinois, the Rebirds struggled from top to bottom and posted a season-low 188.550. The team will look to get back to 193.000 pace before the MIC championship next week. DII Lindenwood is dominating the MIC conversation with its huge 196.400 last week. Illinois State won’t get that high, but staying relevant means at least getting close to 193 mark.

The broadcast is underway! Here we go! Illinois State is hosting in its bigger venue, Redbird Arena. We’ll see what kind of crowd they get on a Wednesday.

Well. Not great for either team. Kentucky will not be thrilled with those hoppy landings this late in the season. Hopping that much at SECs next week will be a problem. For Illinois State, the low YLay start values are killer. The Redbirds also have some work to do on piking vaults down. That said, its a solid start for this team.

Looks like quite a few Kentucky fans made the shortish trip to Normal for this one. Lots of blue in the stands!

Sidney Dukes (Ky.): Yhalf, little off line and biggish step forward. Moves the back foot as well. 9.75, got her on moving the second foot I’d guess.

Aubree Rosa (Ky.): FTY twisted early. Some leg sep and a step back. 9.7 these feel a little tight.

The vault scores felt tight. Kentucky is still not finding landings, but overall based on the scores we saw earlier, I thought a few of those could go higher. The Wildcats NEED to think about landings before next week. Illinois State has some nice bars work, just really loose and a lack of attention to form kept that score down.

Ah that was frustrating to watch for Illinois State because the team has all the pieces of a GREAT beam rotation, it just got wobbly! Some really excellent creativity. It is notable that after three falls last meet they had none today; good comeback. Kentucky was good on floor, but not stellar. The scores seemed fair. Good tumbling, good landings, just missing some of the dynamic performance we expect of the top ten.

Stuart (Ky.): Pretty chest stand mount. Switch + double stag doesn’t reallyyyy get her head back. Bhs loso, totally off line and she falls. Bent arms in the bhs as well. Cat + side aerial + tucked full, she’s so off lands off the landing mat and walks out of it. Really upset. 9.0

Wiggle (Ill. St.): Double pike, several steps back, maybe 3? Team yells “WIGGLE WIGGLE WIGGLE” ! Missed jumps because I was so amused. 1.5 punch front barely gets the front off the ground but stays on her feet. Double tuck, great landing. 9.625

Scores were pretty accurate here; definitely strict, but I really only have questions about the first few Kentucky vault scores. The Redbirds will be happy with this one! Great recovery from the rough previous meet, and counting no falls is a win. Kentucky will be less pleased. The Wildcats hopped on vault and bars and that missed connection from Warren hurt beam after the leadoff fall. Lots of mental work to do before SECs next week.