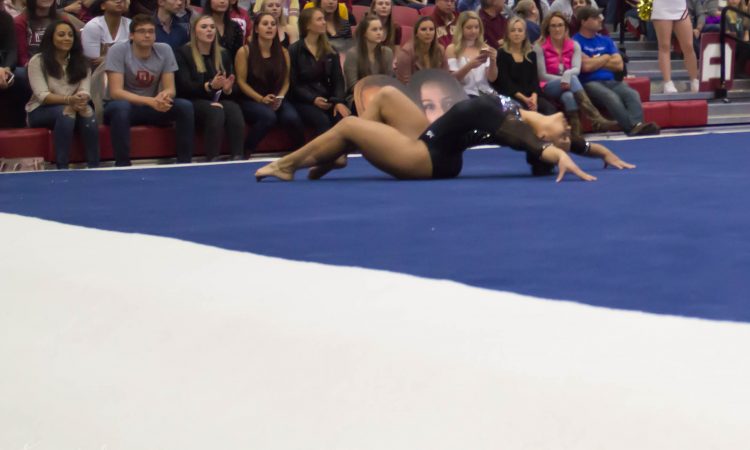 We’ve got a Monday night matchup between Southern Utah and Denver as the Thunderbirds travel to Colorado to take on the Pioneers in the team’s second meet of the weekend! On Saturday, the Thunderbirds hosted Washington in the team’s senior night, breaking 196 with a 196.075. The team was not without adversity, however, as sophomore Megan McBride injured herself during vault warmups and did not compete. Additionally, the team counted a fall on beam and would like to put that rotation behind them. The Pioneers are coming off of a road first place tie at Elevate the Stage Toledo, a meet where the team finally hit a road meet and scored a 196.525. The team looks to break 197 for the first time this season in its senior night and final home meet of the year.

Madison McBride UB: very nice piked jaeger, but she breaks her swing after. gorgeous bail to hs though, and just a step on the ftdlo

Schou VT: good yful with just a small hop. another good full for the Pios! 9.775

judges taking awhile on the McBride score. 9.3 it is

Glynn VT: tsuk lay full; arguably a little piked on the lay but not terrible, and just a step back. 9.775

Gonzalez UB: mount is a little muscled but she has a nice straddled jaeger! beautiful leg form; second lay on DLO maybe a little piked and just a small hop on the landing 9.825

Jorgensen UB: gienger but with leg sep, and breaks her swing…recovers for bail; stuck double back, the whole routine just looked tentative and muscled though.

Denver came out with a solid vault rotation! The landings are starting to shape into later season form and they finally have 6 on the event (since last week). SUU had a good not stellar bars rotation where no one fell but 2 gymnasts broke their swing. Looks like McBride’s score might change though. Someone just came over and asked about it.

Jozwiakowski VT: tsuk tuck full, she got a 9.9 last meet which is perfect for that vault but small foot movement there, and a little bit of legs on preflight. Their best vault so far though. 9.75

Gonzalez VT: another tsuk tuck full, this one with a step. 9.725

Glynn UB: clear hip to gienger; could tell she was off, she completely misses the bar and falls; completely crashes her bail too; step back on full in; not her best routine, and a score they’re gonna want to drop. 8.575

Brown UB: maloney to pak with her usual slight leg form; shap half good; stuck dlo. Man, the Pios are glad to have her back on bars. 9.875

Braley was supposed to vault but they scratched her again this meet!

Karr UB: nice opening hs; good gienger straight to bail; nice final hs; stuck dlo! what a way to finish the rotation for the Pios after a fall! 9.95

SUU with a solid, not stellar vault rotation. The team doesn’t have any 10.0 SV vaults but they execute what they have well. DU had a great bars rotation sans Glynn’s routine, which they are able to drop. All of the hits were solid hits, capped by Brown and Karr.

Jozwiakowski FX: seriously in love with SUU music so far; front rudi loso is super pretty but a little out of control on the landing; good splits on leap series; nice 2.5, better control; totally missed her other pass or something. 9.75

Brown BB: she’s back on beam this week! front aerial good; looks like she’s not connecting it all today; front toss bhs wolf jump nice; switch leap split jump secure; stuck gainer full! I sound like a broken record, but it’s so nice for them to have her back on beam. 9.875

Sundstrom BB: switch leap switch half secure. Arm check on side aerial but otherwise good; secure full turn; bhs loso, fights for it and stays on, manages just a smallish to medium check; hop back on gainer pike; another hit. 9.8

Loomis FX: SJSU transfer to SUU who’s having a much better time at SUU; thought her double pike was gonna be short but she almost has to much power; switch side popa good; front lay lay half good; another leap series with good splits; too much power on her double back but stays on her feet! 9.725

Karr BB: side aerial bhs gorgeous, I love that series! hitch kick side somi secure; she’s a little off on her leap series but gives NOTHING away; stuck rudi dismount. Great routine. 9.95

DU really attacked the beam dismounts today, and they all hit their routines. The addition of Brown stabilizes that lineup so much. Little things here and there, but overall very good. SUU had 5 solid floor routines, but definitely has room for improvement. They’ll want to improve upon their underrotations and just clean up the little things.

Bayer BB: roundoff loso, what a unique series on beam! but she comes off…now SUU is counting that first routine; front punch and she’s off again….nice straddle 1/4; gainer full with a step; ohhh SUU beam…8.425

Packham BB: she looks so nervous, rightfully so, the pressure is on; leaps are secure; bhs loso a little tentative but little to no deductions; good full turn; front aerial front full, little hop in place, but that’s such a unique dismount and I love it! 9.775

Gonzalez BB: split jump straddle 1/4 good; bhs loso, looked off but no movement; good full turn; cat leap to front aeriel ooooo…more unique than the side aerial version; stuck lay full dismount. That gets the team back on track! 9.875

Schou FX: fhs double full, a little short and rotates into the landing a bit; 1.5 to lay good; switch ring switch side nice! her lines are so pretty; fhs rudi split jump good, that pass always looks so fun for her! 9.875

Nipp BB: front aerial good, but looked like she was supposed to connect to something; ahh it was a beat jump; split leap straddle 3/4 good; secure bhs loso; good full turn; stuck gainer full. her beam work is so pretty! 9.925

Addison FX: huge, controlled dlo to open! ro rudi loso good; swich side popa; she has the power and flexibility! good double pike; what a way to end her senior night. 9.9

Denver ends the meet with a great floor rotation capped by Karr and Addison! For the first time this season, the team breaks 197 for a season high score! The Thunderbirds took a step back this meet, faltering on bars and beam, but team was highlighted by Gonzalez and Nipp on beam. The team has some good to think about, but lots of improvement to make in the aftermath of the Alfaro and Megan McBride injuries. Denver easily takes this meet by over 2 points.