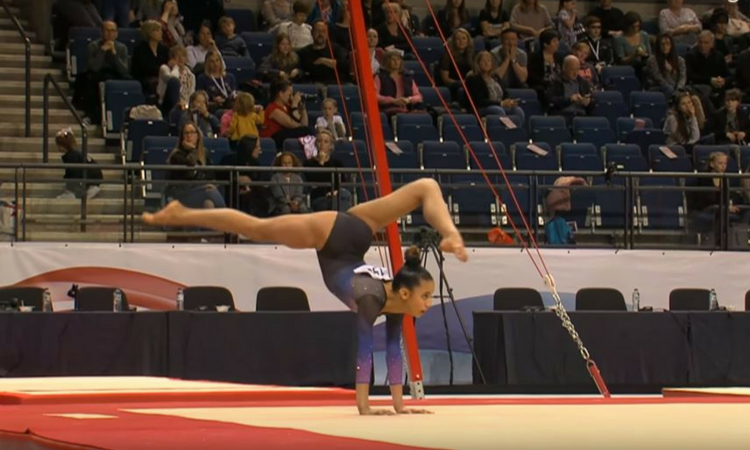 Four future collegiate gymnasts competed at the English Championships in Ilford this weekend. For many established elites, this meet is a warm-up for the British Championships, which will take place in three weeks, and even non-English gymnasts regularly compete here as guests to start their seasons.

In the senior session, two NCAA signees competed. Future California gymnast Abigail (Abi) Solari made her competitive return after almost two years out with a foot injury. She competed three events, skipping floor, though she’s been spotted tumbling on lower impact surfaces in training videos. Her 13.1 on vault is a good hit for her; the 4.4 start value she showed is most likely her front handspring front tuck half, which has always been a secure option. In training, she’s worked a front pike half—a 10.0 start in NCAA. An 11.8 on bars (4.9 SV) is most likely a fall for Solari, but she’s worked hard on her technique on this event. It’ll be exciting to see video from British champs and assess the college viability of this event. Finally, she registered a 12.75 (4.5) on beam, indicating a clean routine and a strong result for an event that hasn’t historically been her most competitive.

Phoebe Turner, the sole fall signee of Iowa State’s massive 2019 freshman class, registered a 47.95 all around total that was good enough for 12th place. She scored 13.2 on her Yurchenko full, not showing her new double at this meet. A 12.05 (4.5) is a good result on bars, perhaps the event on which elite difficulty matters the least in college. Scores indicate she struggled on beam and floor, but English champs took place so early this year that errors were aplenty for many top gymnasts. Turner now has some time to regroup before the British champs and could rank even more competitively in the senior elite field.

Second-year junior Amelie Morgan expectedly grabbed the junior title with a 51.25 and will enter the British champs as a strong favorite as well. She’s committed to Cal for the 2022 season, but if her elite stock continues to rise at this rate, it wouldn’t be shocking to see her defer college for international opportunities or even continue competing elite while in California, in the tradition of Toni-Ann Williams. She’s quickly becoming the premier British gymnast of her generation. As well as her all around title, Morgan landed on the podium on vault, where she registered a phenomenal 9.0 E-score on her Yurchenko full. She also picked up a bronze on bars even with a watered down routine, as well as one on floor with a score that’s below her usual standard. Finally, she scored a fantastic 13.05 on beam to win silver on that event, showing the highest start value (5.3) of the junior division. Morgan ranking so well on not even her best day really demonstrates the strength of her position in the British junior ranks.

Morgan’s clubmate and fellow NCAA 2022 commit Phoebe Jakubczyk won bronze in the junior division, as well as picking up two event titles on vault and bars. Jakubczyk is headed to Oregon State, so there’s an exciting possibility of the teammates continuing to go head to head throughout their college days. On vault, she narrowly edged Morgan with a 13.7 (9.1 E) on her Yurchenko full, and she showed a strong hit to pick up the bars title with a 12.1. A clean routine on beam wasn’t enough to pick up an event medal there, with a start value slightly lower than the rest of the top contenders, but execution did carry her to a silver medal on floor where she scored an 8.5 in execution. Jakubczyk’s clean and consistent work is a great foil to Morgan’s ambitious difficulty, and as the two are frontrunners for the Junior European squad this summer, we’ll have plenty more chances to scout them as they conclude their last junior seasons.