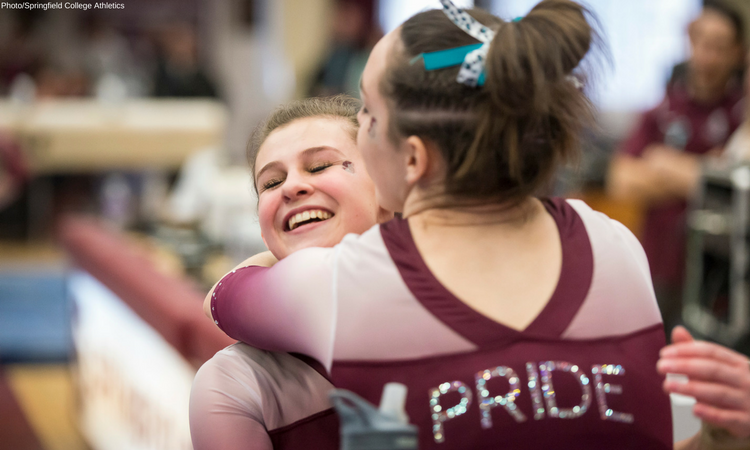 In week five of Division II/III action, Lindenwood and UW-La Crosse remained atop the rankings in their respective divisions. UW-Whitewater overtook Brockport for the second spot in Division III while Bridgeport held onto second in USAG competition, both scoring season highs this weekend.

Bridgeport posted a season high at home on Sunday, becoming the second DII and USAG team to register a 194 this season. Sophomore Maya Reimers led the team with two individual event titles, splitting the vault win with teammates Gabrielle Kistner and Kelsey Campbell. The Purple Knights also swept the top four spots on floor. Freshmen Kat Doran and Lauren Ramirez tied for second on beam, leading the Knights to a meet-winning 48.475 on that event. The Knights remain second in USAG standings after week five.

Rhode Island College registered a strong road score, led by a powerful floor rotation in which three Anchorwomen ranked in the top twelve on that event. Freshman Kaela Skerl lead the team on that event, as well as in the all around, where she ranked second with a score of 35.550.

Springfield set a season high on senior night, led by Tali Twomey, who tied the program record on floor (set in 2001). Madi Dagen finished a close second with 9.775. Briana Kerr and Jessica Clemens also took event titles for the Pride, and Clemens also won the all around.

Cortland’s Emma Schulz tied for second on floor with a 9.775, and Rachel Filipski and Sidney McConnell won event titles on vault and bars, respectively, for the Red Dragons. The team registered season highs on those two events.

UW-Whitewater set a season high by almost three points, becoming the third DIII team in the country to break the 190 mark this season. The Warhawks registered the No. 8 floor score on program history, with three 9.700+ routines. Kate Mierow led the team both on floor and on beam where she scored a 9.750. Sophomore Lauren Marshall scored a 9.750 on vault, leading the team and registering within the top fifteen scores on that apparatus in program history.

West Chester narrowly edged the Warhawks for third, led by a 9.750 on vault from Meghan Chan and one on floor from Madison Brent, finishing only a tenth short of its season high.