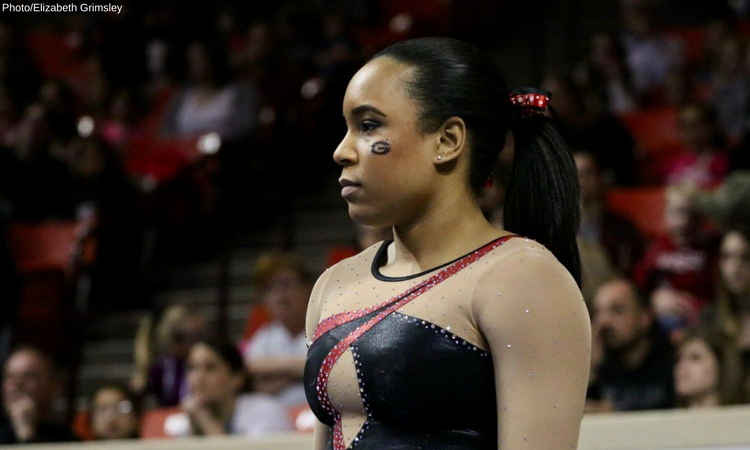 Despite sitting in a precarious position, only putting up five gymnasts on floor the past two weeks, Georgia earned its first win of the season and of head coach Courtney Kupets Carter’s leadership against Auburn last weekend. Arkansas has shown mass improvements over 2017 so far but is coming off an upset loss to Missouri. With the two teams so closely ranked, fans are in for a treat.

The competition will also mark a reunion of the Courtneys as Kupets will meet McCool for the first time since the latter and her husband took over assistant coaching duties in Fayetteville.

Injury update: Georgia’s Hayley Sanders suffered a deep bone bruise earlier in the season then contracted the flu. She has been working her way back in lineups but will not compete this week. Emily Schild, out for the time being with a knee injury suffered during the preseason, is about two weeks away from competing bars and beam. For Arkansas, Mackenzie Anderson has been out with an unknown foot/ankle injury.

Shaffer: Yurchenko half, stuck but doesn’t do the feet together thing and instead jumps her feet together, 9.875 (career high)

McGlone: FTY with a big hop back and could use a bit more height, 9.775

Wellick: FTY with just a small hop but great form in the air, 9.825

Burton: was going to go but isn’t now because Arkansas is happy with its scores

Johnson: first captain in the history of the program apparently, opens with a geinger, normal leg sep, good shootover, double lay a bit over rotated and big step back, 9.775

Oakley: shaposh to pak nice, beautiful last handstand, FTDT with AMAZING form in the air and a small hop to the side, that’s an upgraded dismount for her, 9.875

Vaculik: archy handstand, giant full to huge geinger, toe shoot to high and a FTDT with normal legs and a step back, injured her foot slightly last week apparently so no vault or beam today, 9.800

Snead: clear hip to straddle Tkatchev, shootover super hit in handstand, nice last handstand and a hop back on her double lay but a nice routine, 9.900

Johnson: FTY, tries to stick too much and under rotates and steps forward, 9.700

Yamzon: clearn hip to an arched handstand but saves it, Tkatchev kind of low, shootover to fine handstand, FTDL with a very small foot movement, also apparently hits her foot on the low bar, 9.825 so that’s a score

Shaffer: she’s great on this event, hitting handstands, blind to front giant to half turn to double back with a stick, 9.875

Laird: missed first handstand, nice Hindorff, missed last handstand and a step back on her dismount, 9.750

Wellick: shaposh, shootover to handstand, nice final handstand and a double front with a step back, 9.850

Speed: nice first handstand, blind to straddle jaeger, toe on a tad past handstand to bail slightly arched, giant full to double back with a small foot slide, 9.875

Garner: giant full to huge geinger to immediate shootover, throws out her FTDT too far and falls forward, 9.425 still

Yamzon: cat leap to switch side, bhs bhs loso solid, full turn, nailed her front toss, gainer full with a stick, great hit for the lead off, Arkansas is No. 4 on floor in the country, 9.950 umm woah (career high)

Laird, front aerial to bhs iffy connection, switch leap to split quarter not quite 180, side aerial with a wobble to not connected split jump also not close to 180, cartwheel to gainer full stuck, 9.725

Arnold: double pike  to open, random front aerial, double tuck, switch ring to switch half to split drop, 1.5 to front lay solid, a good lead off for Georgia who’s only putting up five, 9.825

Babalis: whip to double back a little squaty, whip half to front tuck so a mistake there and no matter the score Georgia will have to count it, tour jete half to split full with some wonky landings in terms of rotations, pike jump is nice, double pike solid, 9.700

Dickson: big double tuck to open, when will we see upgrades, 1.5 to front lay solid, switch side popa slightly out of control on landing, double pike, good routine, 9.900

Vega: beautiful double pike to start, chest up landing and everything, she scored a 9.950 last week, 1.5 to front lay solid, switch ring to tour jete half, ps Georgia is wearing its “upset” leos (my term) so will they pull it off against Arkansas? double back to end and almost on her butt but just a deep squat and saves it, 9.800

Snead: bhs loso bhs solid, leap series is hit, nice full turn, solid front tuck “a very difficult skill to perform”- Alicia lol, ro double full stuck/hops her feet together, every bit as good as Yamzon’s lead off and gets rewarded, 9.925 (career high) “do you think a judge is less critical than I am”- also Alicia

Babalis: hits her series fine, sometimes has trouble but not tonight, working through her skills with no big errors, piked front toss is hit if not slightly facing the side, front full hop forward, 9.825

Vega: bhs loso solid, full turn a bit over turned, hitting other skills well, moonwalk gets nada from the crowd, side aerial to back full way crooked but just a hop, 9.725

Garner: double pike with a big step back, front lay to front full with a weird landing/a touch under rotated, 9.875

Yamzon: HUGE double tuck but a bit too much power and a messy step back out of it, last pass is solid, fight for the AA is on with Snead, 9.875, finishes just below Snead

Burton: big double pike with a solid landing, hit second pass, switch half to split full I believe, not an exact 360 rotation, crowd clapping along, bhs front full way under rotated but somehow saves it, wow what a save, still gets a 9.875

Shaffer: open double pike to open, nice, open double tuck with a bit of a big step back, tour jete half to popa, finishes with a 1.5 to a semi-dumpy front lay, some bent knees but saves it, 9.900 ok Arkansas

Well this meet was a tiny bit cracky but nothing like OU at UF apparently so we can’t complain too much. Arkansas hits a 197 to beat Georgia for only the third time ever, a great accomplishment for it.