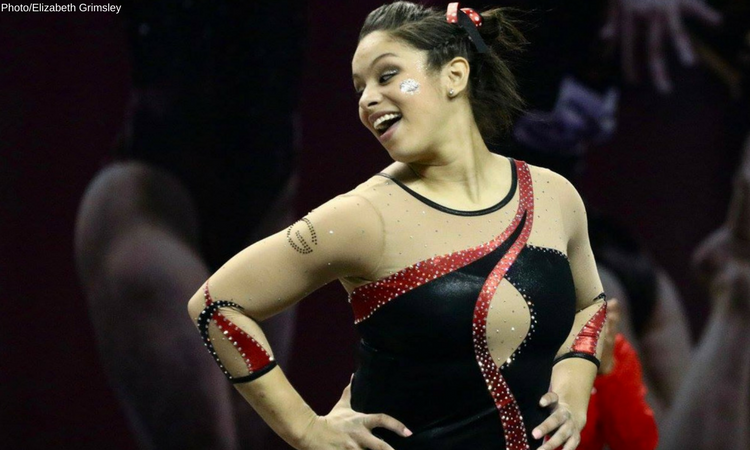 The rivalry continues as the Gym Dogs take on the Crimson Tide for a match up between two storied programs. It’s the third meeting in a week’s time for these schools as Georgia’s men’s basketball team took the W last weekend while Alabama football defeated the Bulldogs in the national championship Monday.

But most importantly, the meet marks the return of storied coach Suzanne Yoculan to Tuscaloosa. Wait—she’s just, like, a volunteer or something, but we all know it’s the Suzanne show or bust. But that’s not to overshadow Courtney Kupets Carter, who will be making her debut as head coach of her former team.

It will be the second meet of the season for the Tide, who are coming off a rather rough performance in Ann Arbor, losing to Michigan and only managing a team score in the 195s. Endurance was a big factor in the loss, so look for that to be improved, or even changes to the lineups, throughout the meet. Georgia, on the other hand, will kick off its 2018 season. However, the team is severely depleted. Junior Gracie Cherrey medically retired this week while the freshman class of four is in various stages of hurt—Madison McPhearson is out for the season, Ashley Foss is working her way back from an Achilles tear, Emily Schild sufferred a preseason knee injury and Marissa Oakley, the closest to 100 percent, is battling shoulder pain. And that’s not to mention the other bumps and bruises the veterans are feeling, such as Jordyn Pedersen’s recently separated shoulder and Sydney Snead’s ongoing back issues.

But enough about broken things. Let’s get things started.

Alabama in its pretty ombre leos—one of my faves—and Georgia in its ones with the gigantic bulldog on the back, which…aren’t my faves.

Maddie Desch: FTY, comes in short, looked like she was trying to stick and hopped forward, something’s weird and one of the judges didn’t see her vault….. like that’s your job?

Maddie Desch… again: FTY, nice form in the air, just a hop better, much better, but apparently there will be a deduction for going again, 9.250 (got a five-tenth deduction)

#NCAAGym should just be canceled tonight. Too many weird things happening.

Shea Mahoney: FTY hop back but clean in the air, a tad crunched on the table, 9.800

Nickie Guerrero: Y1.5, her normal form in the air but sticks the landing, not a ton of excitement from the team or crowd, where are you this is Alabama vs. Georgia—wake up! 9.900

Lauren Johnson: missed first handstand, gienger with some leg form, hit a nice shoot over and a stuck double lay, Georgia only putting up five on bars tonight, 9.750

Marissa Oakley: toe-on shaposh to pak, half pirouette directly on the bar, toe-on to immediate double tuck with a small hop back but a really nice routine from the freshman, she will be a star on the event in the future for Georgia, 9.800

Vaculik: THAT GEINGER THO, slight leg sep, small things here and there but she’s a Vaculik so who cares? normal crazy legs on the dismount, 9.825

Snead: clear hip hand to Tkatchev nice, shoot over with very slight form, double layout a bit short and piked and has to take a couple of steps, 9.850 still

Dickson: Ray huge and nice, clean shoot over, misses the last handstand, nice double layout with a small hop back but a good routine and Georgia will be happy, Alicia I attempted those in my… days of trying to do bars… 9.875, Georgia goes up 0.025 with each routine which is kind of cool? Almost makes you want them to put up a sixth just for kicks

So that was fun? Apparently we forgot how to gymnastics tonight, but I’m here for the drama. Alabama obviously rough, even without the weird Desch disutation. Georgia put up five and did well with it, building scores throughout the lineup.

Sabrina Vega: FTY, some form in the air and a biggish hop back but solid, 9.775

Marissa Oakley: really nice FTY, small hop and not a TON of dismount but clean in the air, 9.725

Lauren Johnson: why is vault such a mess tonight? but Johnson isn’t fazed because her vault was beautiful, FTY, nice form and a stick, 9.850

Rachel Dickson: FTY but gets lost in the air or something and lands like on her side? It’s a miracle she’s not hurt… 8.850

Wynter Childers: toe-on, toe-on shaposh some leg sep, maybe a tad short on her final handstand, blind to double front with a half stuck, some legs on the dismount but a nice starting routine, 9.825

Oh gosh, Alabama has the “Dynamic Diva Belt” for sticks…………

Jennie Loeb: toe-on, toe-on shaposh, some leg sep and no back swing really, short on her shoot over, short final handstand, double lay and a hop forward, 9.725

Kylie Dickson: nice first handstand, but a tad short on shootover, toe-on, HUGE tkatchev, unusual to do so late in her routine, full-in dismount with a step back, 9.850

Kupets tells us Dickson was off on her steps, went anyway and that’s why she had the weird landing. Alabama nearly comes back from the fall on vault to pull within 0.075 of Georgia. Now the excitement happens as Alabama moves to beam and Georgia to floor and Suzanne to watching over everyone with hawk eyes.

Peyton Ernst: solid bhs loso, switch to sheep fine, a little wobble on the next, ro double full with a stick, a good routine back for her, 9.825

Abby Armbrecht: totally zoned out during this routine but the important thing is she hit after being brought in last minute to replace Graber, 9.850

Kiana Winston: a fave of Sacramone’s, front aerial to bhs, looked like she wanted to wobble in between but doesn’t, nice full turn, ro double tuck with a small hop-step back, 9.900

Sydney Snead: ro whip bhs bhs back tuck solid opening, she can upgrade as well, fhs rudi to shush a la Kupets, gets her leap series around well, closes with a double pike, lands short, falls and might have gone out of bounds? 9.200

GiGi Marino: was originally in the middle of the lineup but moved to the end, double pike and moves her front foot a bit, ro 1.5 front lay, tour jete half to popa, ends with a double back, crashes and her ankle is hurt but the trainers are IMMEDIATELY there so good on them, 9.0

The last thing Georgia needed was another injury. They have like 2.5 gymnasts as is.

Alabama pulls ahead after Georgia is forced to count a fall on floor. But Alabama’s beam rotation was strong in its own right, highlighted by Winston and Desch. It’s likely Alabama has this one in the bag, but we’ll wait to see if the Tide’s endurance problems have been fixed since last weekend. I’ve also noticed a lack of excitement from the crowd, which is odd for Tuscaloosa.

THEY NEED TO BRING BACK SUZANNE! oh wait… pic.twitter.com/1z2TXcasmU

Rachel Dickson: showing GiGi with crutches and a wrapped ankle, but onto Dickson, front aerial switch leap sissone, solid, bhs loso and she’s off, I thought it was 2018 not 2017? bhs 1.5 stuck, nice way to end it, I would be afraid of the talk this team is getting after the meet, 9.400

Shea Mahoney: big double pike looked like she stepped out but no flag mentioned or anything, fhs front full front lay, nice form on her leap connection, double tuck with no issues, 9.800

Abby Armbrecht: double pike with a big step back but don’t think it was out, switch side, popa, ro 1.5 front lay a bit pikey, fhs rudi, 9.825

Nickie Guerrero: nearly stuck double pike to open, siwtch side popa maybe a hair shy of all the way around, ro 1.5 front full nice, again, where is the crowd??? fhs rudi a bit of a weird landings but a nice routine overall for her, 9.800

Kiana Winston: double pike nearly stuck, rounds it out with a nearly stuck double tuck too, a nice routine for her and a great return to floor, 9.900

So Alabama wins it despite counting a fall on vault and that weird Desch situation where Suzanne managed to distract the judge or something. Georgia wasn’t as lucky, counting three falls—two on beam, one on floor—but still rather impressively managed a mid-194. The Gym Dogs will actually have another opportunity to come out and not do what they did tonight ever again as they take on Oklahoma in their home opener Monday.

(See a pattern there?)