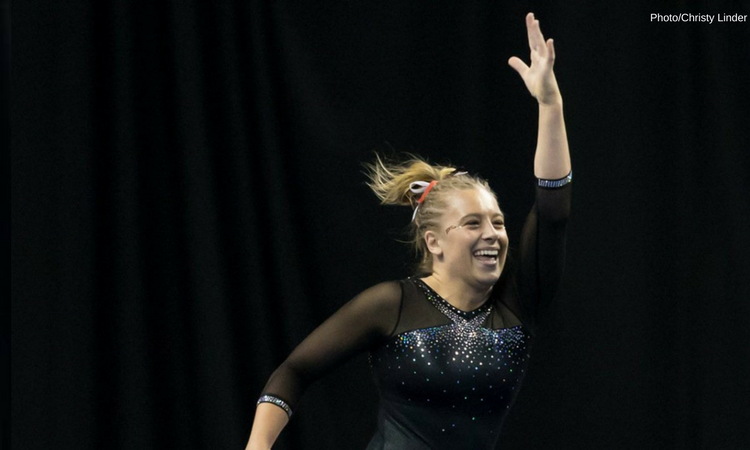 Today we’ve got a matchup between the Denver Pioneers and the Arizona Wildcats! Originally a quad meet, weather conditions in the northeast prevented Rutgers and New Hampshire from traveling to Tucson for the meet. The Pioneers are coming off their best season in recent history, qualifying to the NCAA National Championships for the first time since 2008. The team sees the loss of Julia Ross, Rachel Fielitz and Sam Ogden; however, it brings in a strong class of freshmen including Lynnzee Brown and Mia Sundstrom and return the likes of sophomore Maddie Karr and senior Nikole Addison. The Wildcats suffer the loss of head coach Tabitha Yim to Stanford and will be operating under the guidance of interim head coach John Court. The team also loses Skyler Sheppard, who transferred to Auburn. Returning 11 of last year’s 15 competitors, the Wildcats add four freshmen, including Payton Bellows, who has a dynamic Yurchenko 1.5 on vault. The team also returns senior standouts Kennady Schneider and Madison Cindric.

Injury note: Claire Hammen was spotted on crutches at the Crimson and Gold intrasquad and was also seen sitting near crutches in a recent Instagram story.

Kern: 9.725
Glynn: off on her release, 9.075
Brown: much anticipated collegiate debut, amazing routine and a stuck solid double lay dismount, 9.85
Sundstrom: big straddle Tkatchev but can’t hold onto it, does it again and makes it, nice shootover, great leg form in the air, double layout with just a hop, 9.125
Chesnok: giant full to straddle tkatchev, nice, shootover maybe a tad short, nice final handstand, ftdt, pointed toes and everything, hop to the side, good bounce back routine for Denver, 9.725
Karr: solid routine like she does, nearly stuck double lay, probably more of a college salute, 9.85

Not a terrible rotation for either team despite the mistakes—falls coming from Denver’s freshmen isn’t too much of a surprise in the first meet of the season. Arizona also looked solid on vault with just some form things here and there.

Chesnok: FTY, small hop at the end, 9.8
Sundstrom: FTY, clean form like on bars, just a hop back, 9.8
Addison: FTY, tight twist in the air, small step back, the video is kind of glitching making her look like she was running SUPER slow, I’m giggling, 9.8
Brown: SO good, Y1.5 just the smallest little hop in place, 9.9!
Karr: STUCK Y1.5, her usual form and everything, so she’ll probably get a 9.875 like literally every vault last season… Nope! 9.925

Schneider: toe-on, gienger, hitting her handstands well, shootover, double layout stuck, she looks so good on the event even though she’s mostly known as a floor girl, 9.775
Henderson: straddle jaeger to immediate bail, clean form, double layout stuck, some flexed feet in the air but a good routine, 9.7
Spencer: nice handstand, tight, clean gienger, a tad short on the shootover, double layout, small leg sep and a step back, 9.85
Cindric: nice first handstand, blind to straddled jaeger, shootover to handstand, blind to double front with a small step back, 9.75
Ortiz: clear hip to GIANT straddle Tkatchev to immediate shootover, good handstands, giant full to double tuck, small hop, that’s a good one for Arizona, 9.775
Berg: blind to piked jaeger to immediate shootover, ftdt with some feet form in the air and a small hop, the announcer thinks these are all sticks, 9.875

Nice comback for the Pioneers on vault only putting up 5! Arizona also looked nice on bars.

Hendrickson: beat jump to split 3/4 good; solid on acro with some knees; secure full turn; another secure leap series; and she’s off on the side aerial. her hips were just way off. Ends nicely with a stuck gainer full. 9.2

Leung: bhs-loso, little check; good on full turn; love her lines! split leap to switch leap, solid. little check on side aerial; ends with a back 1.5 with a step. Nice recovery. 9.725

Leydin: nice splits; bhs loso, her hips looked off to me but she’s secure on the landing; pike jump to back tuck with a correction step; takes 2 steps on her dismount. 9.7

Ortiz: wobble on bhs loso but stays on; good on full turn; split leap, looks like she broke a connection; beat jump to stag jump with a little check; cat leap to side aerial to full stuck. 9.675

Glynn: huge double pike to open; GREAT extension on her leaps; rudi to layout, a little short but pulls it around; ok, weird wolfy choreo; she has a full in but opted to leave out the difficulty the first meet; ends with a nice double tuck! 9.775

Brown: this is a freshman to watch on floor; HUGE double layout to open; 1.5 to lay to split jump; love the energy! ring jump to split half, good; ends with a huge double pike. What a floor debut for the freshman! 9.9

Addison: another huge double lay to open; her choreo is dramatic yet fun and spunky at the same to; secure landing on middle pass; switch side to popa, nice splits; nice double pike to close! 9.875

Sundstrom: opens with double tuck–looks like she might’ve stepped out; fhs front full a little short but adjusts and lands cleanly; nice leap series; did I miss something? I think she only did 2 passes? or I just missed one; she did do another dance pass. 9.525. she definitely only did 2 floor passes. Which probably means a lower SV. She’s coming back from some kind of ankle injury–only did a dance through at their intrasquad and I saw her in a boot back in September–possibly still coming back.

It continues to be a tight meet, especially with Arizona’s error’s on beam. That’s what allowed Denver to pull ahead by .2. It’s anyone’s meet to take at this point, let’s see who comes out on top!

Sundstrom: switch leap switch half with a check; good side aerial to sissone; a little tentative on her full turn but no major checks; bhs loso nice and secure; sticks gainer pike to close. overall nice set! 9.825

Berg: secure landing on double pike; nice leap series–pretty lines, great extension; good combo pass, would like maybe a little more control on the landing, it was kind of bouncy; fhs rudi, good, again a little bouncy on the landing. 9.7

Schneider: huge double pike to open; her choreo is always so fun and sassy; front lay front full good, adds some spunk with a kick right after; switch side popa, great extension! huge double tuck to close. Such a fun routine! 9.875

Beam for both teams got a little nervy in areas, but Denver gained the edge in the end! Arizona has some fun floor routines but in the end, the Pioneers had a stronger second half of the meet to come away with the win. It will be interesting to see how these teams develop over the season. With the first meet out of the way for the freshmen, the Pioneers can only go up from here and it will be exciting to see if Arizona exceeds expectations.

That wraps things up for this meet! Check back later for a live blog of UCLA vs Ohio State!