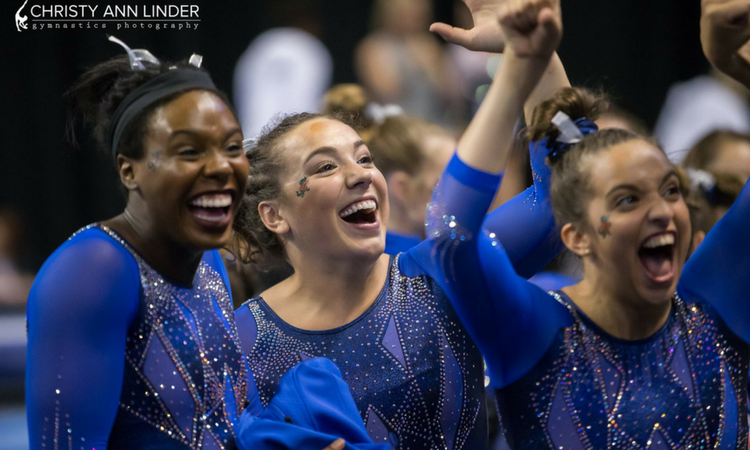 With all but about nine schedules having been released for the 2018 season, it’s time for NCAA Gym News’ annual schedule difficulty rankings. Georgia faced the toughest opponents in both of the last two years but was barely edged this year by Florida by a score of 11.0 to the Gators’ 10.3.

But what do these numbers mean? It’s pretty simple. Looking at 2017’s end-of-season rankings, we took each of the top 20 teams’ 2018 opponents’ rankings and added them all together. If their opponent was the home team, we subtracted two points for “home floor advantage.” In the case of non-neutral site meets with multiple teams, only the home team would have those points subtracted. Finally, we averaged that number and the team with the lowest number ranks first in schedule difficulty.

Confused? We broke down Oklahoma as an example below.

Nwo to the rankings. Florida and Georgia were neck and neck for the most difficult schedule, but the Gators prevails based on one important factor. Both teams had the benefit of competing against most SEC teams, all of which finished within the top 20 in 2017, as well as a good chunk of teams that competed at nationals.

But Georgia’s main downfall was the addition of Stanford to the Augusta Elevate the Stage meet. Since Stanford performed so poorly in 2017, only finishing the season ranked No. 28, having the Cardinal as an opponent brought down many a team average. What our formula doesn’t take into account, though, is how much more competitive Stanford will be this season, causing the rankings to be skewed ever so slightly.

Coming in third in our rankings, rather surprisingly, is the Big 10’s Michigan. Despite having five teams that didn’t even make regionals in 2017 on their slate, the Wolverine’s schedule also includes home meets against Alabama and Utah, as well as competitions at Oklahoma and Nebraska, helping to balance out those higher-ranked teams.Alabama and Utah round out the top five.

In terms of conference difficulty, the SEC holds three of the top five positions as well as seven of the top 10. National runner up and SEC champion LSU sits just outside the top 10 with its main downfall being facing its most difficult opponents in Baton Rouge, as well as competing against four teams outside the top 25 and three that did not even make regionals in 2017. 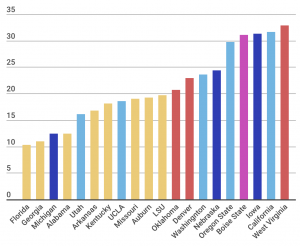 The 2018 season is shaping up to be an exciting one! To view the full schedule of meets, click here.