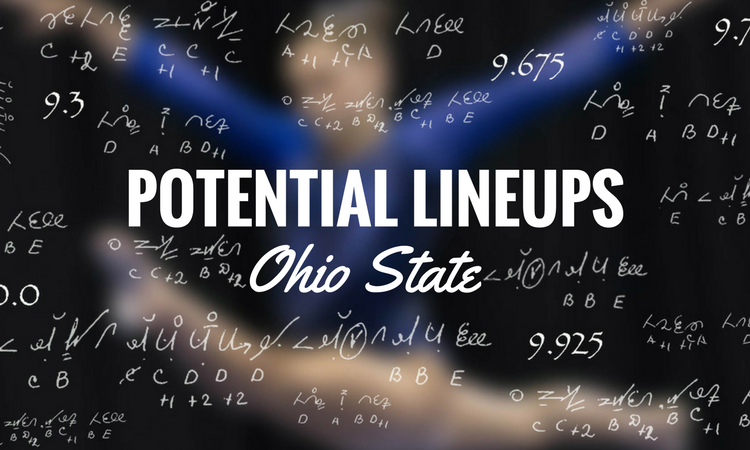 After the massive flurry of coaching changes this year, Ohio State saw the dust settle with Meredith Paulicivic as head coach. Seniors Tenille Funches, Erin Malone and Jaine VanPutten leave behind holes on each event, and Paulicivic will have her work cut out for her to try to bring Ohio State back into the Top 20, a mark it hasn’t achieved since the 2013 season.

Vault is a bit average when it comes to the newcomers. Danica Abanto and Jenna Swartzentruber both vault the standard full, with Swartzentruber’s typically the stronger of the two. She often has an uncanny way of sticking her vaults, though occasionally she does have to swim for the stick. Morgan Lowe has vaulted both a full and a one and a half in the past year, and while her more difficult vault may not be ready for college just yet, her full has great dynamics and solid form. Leonie Gast has a handspring front pike that she’s trained, but it doesn’t quite have the height to upgrade it into anything worth a 10.0, it seems.

The veterans, however, do seem to have a strong setup put together. Alexis Mattern will likely anchor again, with her handspring pike half being the only sure bet for a 10.0 start value. Jamie Stone vaults a strong Yurchenko half that scored as high as 9.875 last season, and Olivia Aepli, Stefanie Merkle, Taylor Harrison and Kaitlyn Hofland all vault Yurchenko fulls with varying degrees of success. Aepli and Merkle both typically scored in the 9.7-9.8 range, with no score lower than a 9.65. Hofland only vaulted about half the time last season but notched four scores at 9.8 or above out of her seven attempts. Harrison actually didn’t vault last season, but if she’s back in 2018, she’s capable of scoring in the 9.8-9.85 range. With these things in mind, here’s what we would suggest for the Buckeyes’ lineup.

Sparse would be the word we’d use to describe the freshmen on bars here. Four of the six freshmen don’t have viable routines, whether that be due to lack of a single-bar release, form issues or just inconsistency. The remaining two, Abanto and Swartzentruber, have very different sets. Abanto’s feels very bare-minimum, with two of the simpler D-level transitions and a piked double back dismount. Swartzentruber on the other hand has a lovely Maloney to pak salto combination as well as a Van Leeuwen and a double layout dismount—all of which showcase her strong execution.

As far as returning Buckeyes, Aepli and Hofland are the two strongest competitors. Aepli was a little inconsistent last season with three total misses, but she’s also capable of 9.875-worthy routines. Hofland was consistently the best bar worker on the team last season with only one fall and a typical routine earning her 9.85 or better. Mattern is our pick for the lead-off role, almost always scoring between 9.8 and 9.85 and only falling once in 2017. Amanda Huang was a solid bar worker in her elite days, despite her less-than-stellar scores last season indicating otherwise. If Huang is back up to her full capability, she will certainly merit a berth in the top six. Harrison got a little stuck in the 9.7 range, but she’s definitely one to count on to hit when she’s needed. Merkle only competed bars once last season for a 9.55, but Ohio State is going to need all hands on deck for this lineup considering how few routines it returns. She’ll probably make alternate simply for the fact that she has a bar routine.

Rounding out our alternate choices is Nevin Adamski. Though she didn’t compete last year, her set from level 10 is usable, and again, the Buckeyes can use every routine they can get, so leaving Adamski out of the picture would definitely be an oversight. Take a look below at the rest of our proposed bar lineup.

Beam isn’t as dire a situation, especially as there are some strong freshmen ready to contribute. Both Abanto and Swartzentruber were capable of big scores in J.O. and were more consistent than most of their fellow newcomers. Considering beam was by far the Buckeyes’ weakest event last season, coming in at No. 41 rather than something in the 20s like the rest of the events, a big change is necessary, and these freshmen might be exactly what the team needs.

That’s not to say the veterans aren’t needed. Stone will likely take the role of lead-off, as she never once fell in 2017 and scored 9.7 or higher on nine of her 11 routines. Mattern is also capable of steady scores in the 9.75-9.8 range, though she did have two major falls in consecutive weeks toward the end of the season. Huang again got a little stuck in the 9.7s, but she’s definitely capable of better. We believe that with a year under her belt, she’ll be a stronger, steadier competitor. Aepli only competed beam once, scoring a 9.8 at regionals. If she can continue that ability to hit under pressure, she’ll be in the top six for sure. Harrison is the only gymnast who’s been able to repeat her highest score on beam, a 9.875. Hofland once scored a 9.9, and Merkle tied Harrison with a 9.875, but neither of them have been able to replicate their performance. Harrison scored two 9.875s last season and frequently scored above 9.8, something most of her teammates can’t say. Her two end-of-season falls aren’t inspiring enough to make her an anchor performer, but we do consider her to be the strongest. Here’s how we propose Ohio State mixes it up on beam.

The surprising thing about Ohio State’s floor rotation is that there are almost enough returning routines with E passes to fill out the entire rotation, plus five veteran gymnasts with scores at 9.85 or better. Yet floor was the team’s second-worst event last year. Consistency and performance are likely what’s holding this team back, so the freshmen will be looking to slide into the lineup largely based on those factors. Swartzentruber took fifth on floor at 2016 J.O. nationals and has gorgeous lines that lend themselves well to balletic, dramatic choreography. Abanto, on the other hand, is more of a power performer. Her opening double pike gets great pop off the floor and her musicality makes her a choreographer’s dream. Lowe is also an option, with gorgeous split positions in her dance elements and solid tumbling.

What’s also worth noting about Ohio State on floor is that Paulicivic was the choreographer for Utah during her time as assistant coach. We’re likely in for a totally different kind of floor rotation this year for the Buckeyes. Mattern is the clear leader, with her huge double layout, great presence and a score ceiling of 9.925. Merkle boasts a strong full-in and a 2017 season high of 9.9, and Aepli and Harrison also have solid scoring ability, as well as E passes to contribute. Stone didn’t compete floor every week, but she was consistently in the 9.8s. Finally, Huang has had her inconsistencies, but she does have clean form and steady tumbling. So if someone needs resting, she could potentially put up a useable score as an alternate. Here’s our proposed floor lineup for Ohio State this year.

With these lineups, we only have Mattern returning to the all around, with the possibility of Harrison and Aepli joining her if they’re needed on their alternate events. Mattern qualified as an individual to nationals last season, so she’s easily the strongest choice of the group. Of the freshmen, Swartzentruber is the most likely option, having placed eighth in her division at nationals. She’s actually quite likely to contribute on all four, especially as depleted as the team is on bars.

Overall, Ohio State is a little sparse on depth, but the routines they do return should be enough for a strong showing. Paulicivic will need to tap into all her resources to improve upon last season’s No. 24 ranking.