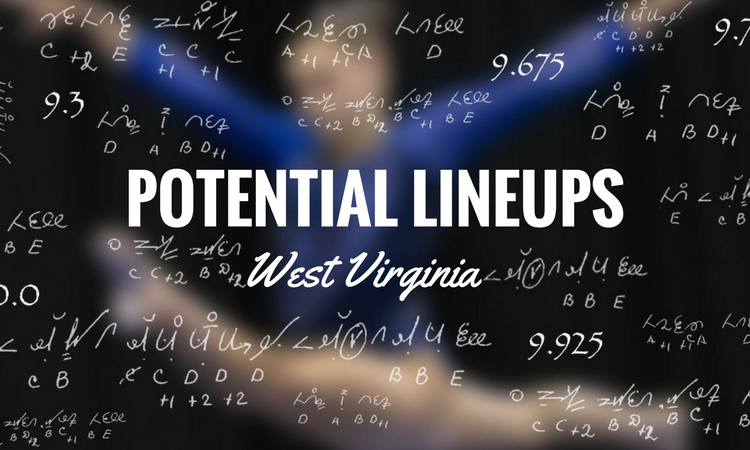 For our next potential lineups analysis, we’ll be checking out our first Big 12 team of the year: the West Virginia Mountaineers. After losing all arounder Alexa Goldberg and beam stalwart Brooklyn Doggette, we expect this under-the-radar team to start slow and build steam as the season goes. WVU has a good crop of freshmen coming in, but it’s also going to need its upperclassmen to step up their game to improve on its No. 20 placement in 2017.

Vault only sees the loss of Goldberg’s full, but even among the vaults of their four incoming gymnasts, the Mountaineers will be lucky to replace her scores. Michelle Waldron is the most likely candidate, with a strong, dynamic Yurchenko full that she stuck cold at J.O. nationals this year. Jessie Bastardi also has a full, but she doesn’t get enough power on her block for her landing to be reliable. And Sydney Marler has a tucked Yurchenko full that’s more reliable but starts even lower than the laid-out version.

As for the returners, Zaakira Muhammad and Kirah Koshinski are going to be the strongest players again this year. Muhammad’s layout full is huge, often getting more distance than any of the 10.0 start value vaults she might be competing against. And Koshinski’s one and a half is the only 10.0 vault on the team and has the superbly clean form to match her difficulty. Chloe Cluchey had bouts of inconsistency in her freshman season, but when she hits, she’s definitely capable of 9.8+ scores. Robyn Bernard and Julia Merwin both have Yurchenko layout halfs, but have a blind landing, which makes them more difficult to land. Both Bernard and Merwin sat around the 9.75 range last season, so they’ll hope to improve those scores—but at least the very least, their consistency is relatively solid.

Even with four new freshmen coming in to replace just two graduating seniors, West Virginia ends up with only eight possible vault options, leaving us without our usual three alternates to name. Here’s how we would construct the Mountaineer vault lineup if it were up to us. 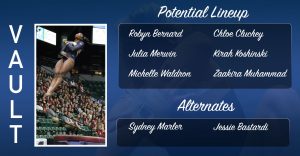 Bars was consistently Goldberg’s best event, so losing her strong scores might be hard to stomach at first for WVU. Two of the freshmen don’t have releases that bring them up to the level of difficulty necessary for NCAA competition, so that leaves Bastardi and Marler as options. Bastardi’s double front dismount is a little scary, though her release skills have good dynamics. Marler is perhaps a little shy on some handstands, but her technique is clean and her dismount is far more secure, making her likely the best choice of the newcomers.

The veterans are going to have to make up the difference by improving their consistency and refining the details in their technique. Muhammad and Tiara Wright are likely the two best bar workers among the group, both reaching highs of 9.9 last season. Bernard was pretty steady in 2017, generally hovering around 9.7-9.75, but the remaining veterans all show varying degrees of inconsistency. Gillette and Cluchey are probably the strongest of the remaining vets, though Kassidy Cumber, Jaquie Tun and Abby Kaufman all competed bars last season as well. Finding the right mix to ensure the squad is hitting six for six every time will be a challenge, but here’s what we think the best squad for the Mountaineers would look like. 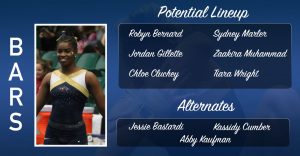 Consistency has not been West Virginia’s strong suit on beam, and unfortunately, it doesn’t seem that that trend will go away with the incoming freshmen. As Doggette, the most consistent gymnast on beam last season, and Goldberg depart, Bastardi is going to be the team’s best bet of the newbies. Making game-time decisions, like repeating the first skill of a series instead of continuing with the series and possibly falling, shows she’s an experienced veteran on the apparatus. Plus, her split positions and flexibility are just lovely, and her confidence is well beyond her years. Beam could really be her event to shine, as long as she doesn’t catch the inconsistency bug. Marler could also be an option, with sky-high confidence and impeccable balance, but she’ll need to improve her split positions before she’s able to score well.

As far as pre-existing contributions, WVU will look to see improvements from Muhammad and Koshinski, who both have good routines but can get a little fallsy when the pressure’s on or things aren’t going their way. Kaufman and Carly Galpin had some stumbles last season, but they’ve also had some impressive, well-scoring moments, including a season high of 9.9 for Kaufman and 9.85 for Galpin. Cumber and Wright also competed beam in 2017, but their respective track records of staying on the apparatus aren’t exactly favorable, so they may not make the final cut for the top six.

Taking these factors into account, here’s what we think the beam lineup at West Virginia should look like this year. 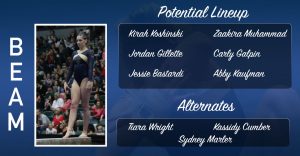 Floor was one of West Virginia’s stronger events last year, wowing the crowd with fun choreography and some decent difficulty. Goldberg’s graduation means the loss of one E pass—her dynamic full-in. But freshman McKenna Linnen actually brings a new E pass to the team, a front double full, which she actually connects into a punch front. That alone should indicate how much power she’s able to create. Her elegant lines and great musicality should set her up quite well for a spot in the floor lineup. Waldron also gets a lot of power in her tumbling, and while her splits aren’t the strongest, the confidence and presence she brings to the floor definitely make her worth consideration.

In its current iteration, sans freshmen, the team’s only two E passes come from Muhammad and Koshinski who both compete double layouts. Their routines are stellar, no doubt about that, but two routines do not a full and competitive lineup make. However, the Mountaineers seem to have plenty of options to choose from. Cumber stayed fairly steady around the 9.8 mark last season, making her a good candidate for the lead-off position. Bernard and Gillette weren’t consistently in the lineup, but their routines were usually good for a decent 9.75+ backup routine when asked to step in. Kaufman and Cluchey both were able to figure out their floor by the end of season, with Cluchey really coming into her own, earning a 9.925 in her freshman season. Merwin was an occasional contributor as well, but her consistency was all over the place.

Mixing dynamic performers and strong tumblers is never easy, but here’s how we would create the floor lineup for the Mountaineers in 2018. 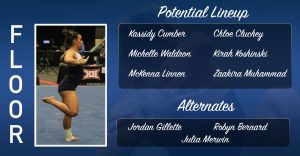 Muhammad qualified to nationals as an individual in the all around—that should tell you a lot about her without even searching for details. Her strongest events are the leg events, but she’s also now the lone all arounder. If WVU wants a shot at qualifying an individual to the national championship after Muhammad graduates, it’s going to want to try out a few girls on their alternate events before the pressure gets too high later in the season.

Cluchey and Koshinski are the two best three-event athletes on the WVU team, so if Cluchey can figure out beam and Koshinski can put together a basic, clean bar set, either one could definitely have a shot. This would allow them more experience competing all four events.

Overall, West Virginia is one of those bubble teams that is missing just a little something before it can move up into the high stakes league. Its No. 20 rank last year was its best since 2007, an improvement coach Jason Butts will likely want to capitalize on and continue building upon in 2018.

Tune in Saturday to check out our next post on SEC powerhouse Florida! To see all the posts in the potential lineups series, click here. 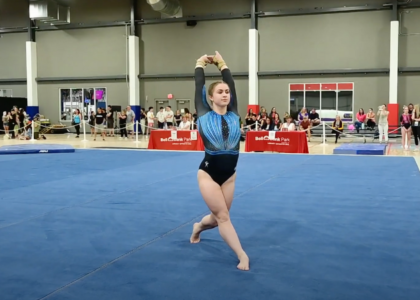