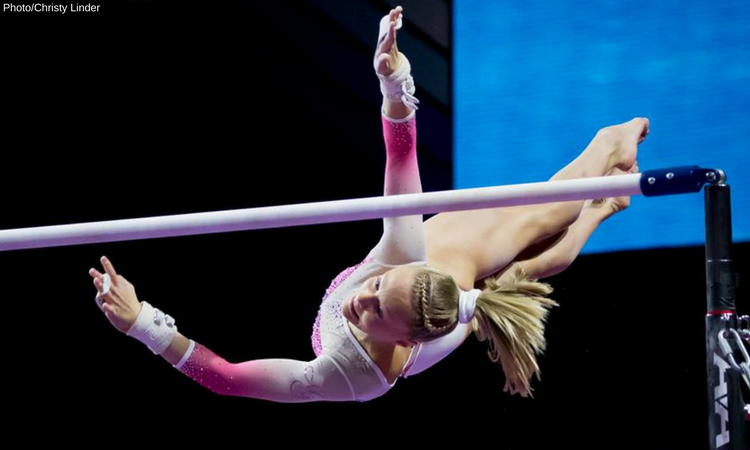 The P&G Championships mark an exciting time for elite gymnastics but also give us a much-anticipated glimpse at many future NCAA gymnasts. This will surely be monumental year as we have 30 budding collegians competing throughout the junior and senior competitions. As this exciting weekend of competition gets underway, see who captured our attention during podium training.

This future UCLA Bruin looked confident throughout the entire podium training session, but balance beam, her first event, was perhaps the most impressive. She didn’t show any sign of nerves in her first public training session since being crowned the U.S. Classic junior champion. This calmness was particularly evident during Malabuyo’s balance beam routine. She displayed an impeccable triple series, her standing Arabian was sky-high and floaty and each turn seemed more self-assured than the one before. At the U.S. Classic, Malabuyo was second on this event, with a 14.45. If she can bring this same confidence on every event to the competition, then the P&G Championships might prove to be Emma’s competition to lose.

Remember how Perea won bars at the U.S. Classic (junior session) while dismounting with a flyaway (an A skill)? That’s because her gorgeous form on this event truly sets her apart, particularly in the junior field. While we did see some dismounts from her in podium training, it’s clear that she’s still coming back from an ankle injury. While she’s definitely not at full strength and it doesn’t look like she’ll be competing all around, this routine was solid and beautifully executed. If she hits all of her connections, it could very well be one of the most difficult routines being done in the world, which is particularly impressive given that she’s still a junior. Keep an eye on this future Cal star during the competition as she makes a run for the junior uneven bars title. See her routine from podium training here.

We’ve said it before, and we’ll say it again: Kenlin is an incredible catch for Iowa, and that was once again evident during her podium training performance—particularly on the balance beam. This junior won beam at the U.S. Classic amongst an extremely strong field. She did so with a beautifully executed triple series and a nearly stuck double pike dismount. Her performance on the event during podium training was equally as solid. She is certainly one to watch, and it will be exciting to see what she does during this competition and during her elite career before heading to Iowa.

The gymternet loves Morgan Hurd both for her style and her charisma. While this future Florida Gator got off to a bit of a rough start on beam, she redeemed herself on bars and floor. She truly puts the “artistic” into artistic gymnastics, and that is evident throughout her entire floor routine. When she went to bars she hit routine after routine extremely cleanly. She placed second on floor exercise at the U.S Classic with a score of 13.85, and it will be interesting to see how she fares competing all around. It will be exciting to see her add vault and uneven bars to her repertoire. If she hits her routines consistently, she could very well challenge for a spot on the podium or even the very top.

It’s hard to write a highlights piece in 2017 without mentioning Ragan Smith, the current “It Girl” of USA Gymnastics and future Oklahoma Sooner. Smith didn’t compete the all around at the U.S. Classic but still came away with the bars and beam titles—and she showed no signs of slowing down during podium training. Her balance beam routine, which scored a HUGE 15.31 just a few weeks ago, has since been upgraded with the addition of her double Arabian dismount, which she competed throughout the 2016 season. Her standing back full was also as solid as ever. While her tumbling was not as strong as we’ve seen it in the past, Smith unveiled her much-anticipated new floor routine—a replacement for her famous Addams family routine. Take a look at the debut of her new choreography.

This first-year senior is one of five future Bruins competing at the P&G Championships. Chiles had a solid showing, particularly on vault, as there very few Amanars being done in the United States right now. The lack of Amanars being competed right now could bode well for her in the competition and in years to come, particularly if she can put together a clean competition in the all around to add to her resumé.

Today did not seem like Riley’s day. She was struggling immensely with catching her releases on the uneven bars and the frustration appeared to be mounting. However, she was able to move to beam and hit a solid set. It showed a lot of mental toughness to be able to leave the bars mistakes behind. It was great to see her end on a good note, particularly on beam, where she’s had some struggles in competition this year. See her talk about coming back from injury and what it would mean to her if she were to make the worlds team:

Shchennikova is coming off of a win in the all around at the U.S. Classic, and that really seems to have done a lot for her confidence. A highlight today was definitely her beautifully executed uneven bars routine. Her routine has the potential of starting out of a 6.2 D score, and if she can hit a clean set, she could be in the running to win an uneven bars title here at P&Gs as well as increase her chances of making the worlds team.

Nguyen has not announced a college commitment, but whichever team gets her will be extremely lucky to have her as a part of their team. Podium training marked her first domestic appearance in 2017 as she did not compete at the U.S. Classic due to a last minute injury. Her balance beam set has always been beautiful and difficult and should prove to be a standout in the competition. Watch her routine from training here.

This was most definitely an exciting and busy night of gymnastics. What were your favorite routines? Let us know in the comments or on Twitter, and don’t forget to tune into the competition, starting Friday at 4 p.m. ET.