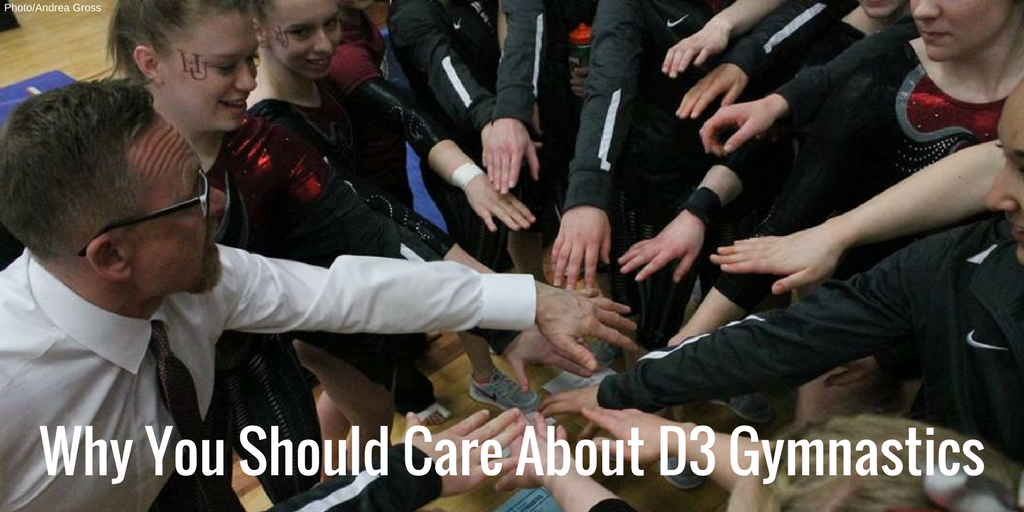 Division 3 gymnastics is largely an unknown commodity in college. Few follow it, but those who do are enchanted by the energy and are surprised by the level of gymnastics being performed. It’s no wonder, as these programs are sparse—with only 15 teams throughout the country—and coverage is relatively limited. However, it’s not something you want to miss out on as creativity and energy reign supreme. Not only are routines unique and contain their fair share of high flying skills, but community service, fundraising and academics are truly emphasized in so many of these programs. Still need convincing? We’ve got five reasons you should start paying attention to D3 gymnastics.

If you watched this year’s NCGA Championships—otherwise known as D3 nationals—you will know that there is no shortage of difficulty being performed at the D3 level. Take 2017 floor champion Eboni Jackson of Winona State who performs a full in as her first pass (not to mention it was stuck cold). Many gymnasts from top Division 1 teams don’t even have that much difficulty in their routines!

Additionally, make a note of Baylee Tkaczuk of UW-Oshkosh, the 2017 NCGA bars champion, who competes a beautiful tkatchev to pak combination and a stunning double layout. We’re sure many DI lineups would welcome the addition of Tkaczuk’s routine in a heartbeat.

And we can’t forget Katie Fiorilli of UW-Whitewater, who qualified to 2014 NCAA regionals as an all arounder. She even placed 20th on vault out of 42 competitors in a regional that included powerhouses such as Oklahoma, Minnesota and Illinois.

A common complaint with DI gymnastics is that all the routines are similar and there is no variety. That’s not something that can be said about D3. Rarely do you see more than three of the same vault in a rotation, and many gymnasts perform unique combinations and skills while still earning the same difficulty bonuses as D1. It’s fascinating to see all the different ways the gymnasts come up with to reach full difficulty.

A perfect example of this is Ursinus’ Lindsay Rush on bars. This routine begins with a giant, higgins, front giant, healy, pike flyback connection and finishes with a layout flyaway 1.5 dismount. Higgins, healys and flybacks are rare in D1, so a routine with all three is pretty much unheard of.

BHS-layout stepout series aren’t quite as common either, with more gymnasts finding other, more interesting ways to fulfil their tumbling series requirement. Erica Roth of Brockport is just one of many who compete a front toss to back handspring series.

In D3, academics are emphasized as there are no athletic scholarships given. Of 53 graduating seniors in the NCGA, 43 earned Academic All-Americanstatus. That means that 81.1 percent of graduating D3 gymnastics seniors had above a 3.0 GPA.

Hamline and Brockport are both examples of teams heavily involved in their communities with the Pipers working with an organization that provides housing, employment and education to low income families. The team first cleaned up the grounds and then taught gymnastics to the children living in the housing. They alsoparticipated in one of the largest food packing events in the U.S., packing millions of meals for the Feed My Starving Children organization. Brockport holds an annual “Stick It To Cancer” event, often raising up to $1600 for the local children’s hospital.

There are no scholarships in D3 gymnastics, meaning there is no external motivation for participating. Because of this, heart and love for the sport is so prevalent in D3.

Just one example is Jillian Falduto of Ursinus, who suffered a dislocated and shattered ankle that had doctors saying she would never recover from, yet she is already back and competing floor and vault.

But the proof doesn’t stop there. Rachel Lee of Ithaca is back on the team after being diagnosed with cancer after her freshman season. She took one year off for treatment but returned to the team while receiving chemotherapy once a month. Her coaches sight her dedication to a comeback as a source of inspiration for the team.
And Cate Reynolds of Hamline eloquently talks about the love and heart so many involved in D3 gymnastics feel in this video, “I used to be a gymnast”.

The hashtag #WhyD3 is commonly used to describe why people participate in D3 athletics. In gymnastics, so many participate because it is all about fun. It’s full of tons of cheering, laughing and is truly a community where all teams support each other. Watch and laugh as all of the teams at the WIAC Championships perform the Harlem Shake, demonstrating the love, fun and community that define D3 gymnastics.