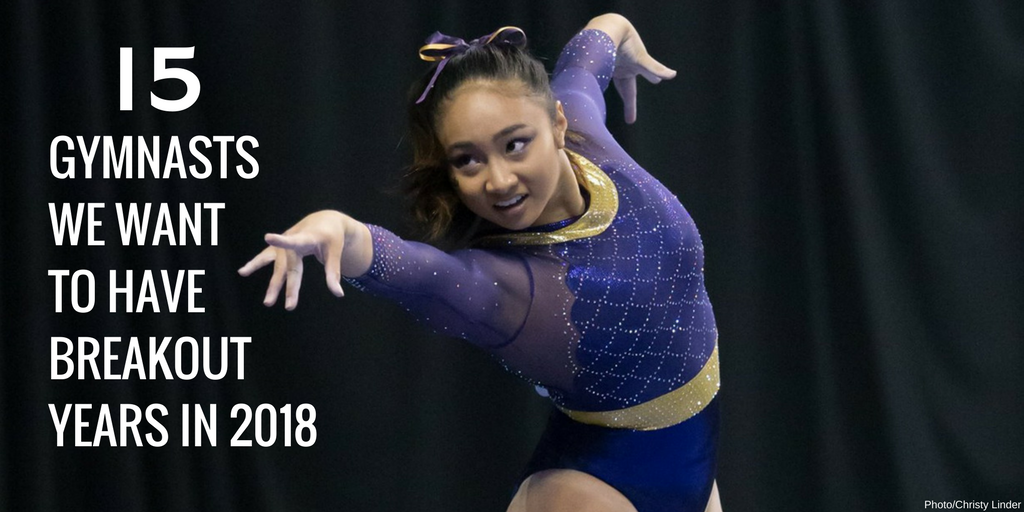 We’ve seen it happen many times in the past. Gymnasts fly under the radar during the start of their NCAA careers only to have a breakout season and change everything. Who pegged Mary Beth Box as one of Georgia’s most valuable gymnasts when she was a freshman? We took a look at some of the gymnasts poised to make breakthroughs in 2018 and detail who might be capable of the feat.

Anna and Grace Glenn (UCLA)
If they can finally get healthy, this dynamic duo will become a fan favorite in a heartbeat. Their form, style and expression makes us drool just thinking about it. While it’ll be hard to shine with a plethora of former elites on the squad, there’s something special about the Glenn’s gymnastics that will make them stick out.

Macy Toronjo (UCLA)
She only really started to shine part way through the season in 2017. But with a whole summer and fall of training—and hopefully no more setbacks—Toronjo is setting herself up for a big year in 2018.

Alex Marks (Oklahoma)
Unable to really break into the lineups because of Oklahoma’s massive amount of depth, Marks’ time finally might have come with three-event rock Charity Jones and all arounder Chayse Capps, plus bars specialist McKenzie Wofford, all graduating after the 2017 season. With holes to fill and Marks waiting in the wings, it could be a big year for this junior. And on more events than just vault.

Jordyn Pedersen (Georgia)
Coming in, most people probably expected Pedersen to compete more than she did (read: anything at all) during her freshman campaign. With a summer of college training and a new coaching regime, she’s poised to breakout.

Sabrina Gill (Oregon State)
As one of the bigger names in last year’s freshman class, many expected Gill to break onto the scene with a bang. Though she became a regular contributor to both the vault and beam lineups, she frequently got stuck in the 9.75-9.8 range rather than reaching her full potential. With a season now under her belt and so many gaps to fill from the graduating class, we expect Gill to step up in a major way in the coming season.

Evanni Roberson (Washington)
After an awesome final J.O. season, Roberson was poised to kick some tail as a Huskie. Unfortunately, she suffered an injury in preseason, and though she recovered enough to exhibition here and there, she never got it together enough to crack a lineup. We’re hoping that with more time to recover and train, she’ll back at the top of her game.

Kirsten Peterman (Maryland)
We predicted Peterman would do big things for Maryland in her freshman season, as the Terps were hurting for big routines after losing two of their best gymnasts to transfers after 2016. She didn’t really start to look comfortable until midway through the season, but we know she’s capable of more.

Cassidy Keelen (California)
Keelen had many fans excited about Cal’s recruiting class of ‘17, but she was quickly sidelined by injury before she could really get started. Provided that she’s healthy come January, there’s no doubt she’ll be one of Cal’s new heavy hitters.

Zaakira Muhammad (West Virginia)
Some might argue Muhammad already had her breakout year in 2017, qualifying to the NCAA championships and breaking a slew of records for West Virginia in the process. But we believe she’s just getting started, so don’t be surprised if this is a name you hear a lot over the next 12 months.

Erin Macadaeg (LSU)
We’re ready for Macadaeg to become more than a one-event gymnast. Don’t get us wrong—we LOVE her on beam. But it’s time to bring her talents to the other events. She trains in the all around, after all. And don’t forget… She happens to be sitting on a one-time score of 9.950 on floor.

Erynne Allen (Kentucky)
With a high, powerful vault and a huge double layout on floor, we expected Allen to bring Kentucky’s power event lineups to new heights this season. For some reason, this didn’t happen, so we’re hoping to see her break through in the coming year.

Jasmine Arnold (Georgia)
We fell in love with Arnold’s floor routine when she showed it off at the Sneak Peek last December. Hoping she would make it into the lineup or at least perform an exhibition, we were sorely disappointed come April. But with one more year to finally break through, we think she’s ready for the spotlight—especially with a little nudge from Courtney Kupets Carter and Suzanne Yoculan Leeburn.

Polina Shchennikova (Michigan)
Shchennikova’s career has been quite the rollercoaster over the years, and this year at Michigan was no exception for her. We’re hoping that after a year of NCAA competition, she can stabilize and really start consistently pulling big scores for the Wolverines.

Khazia Hislop (North Carolina)
Hislop was a rock on beam and floor for the Tar Heels, but she’s capable of so much more. We’d love for her to be able to consistently compete her awesome double front, and her Yurchenko full would be a great asset to North Carolina as well.