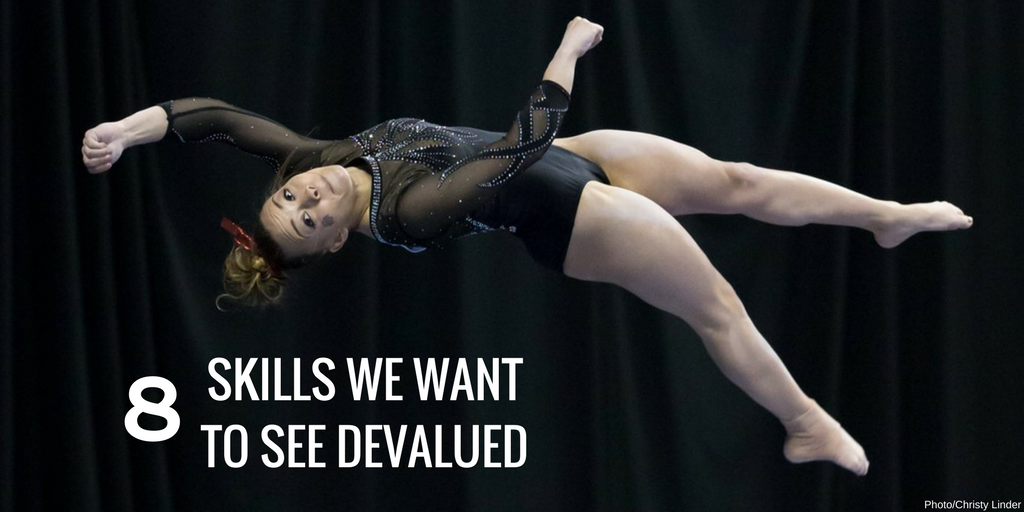 ​When everyone does the same set of skills in a routine, things can get pretty boring. Devaluing some of those most popular tricks might force diversity in the sport and make it more appealing to watch. Now, when we say devalued, that doesn’t mean the gymnast can’t do the skill anymore, it just means they won’t get the same credit for it as, say, other, harder skills. We know this isn’t realistic for most things as it would make it increasingly difficult for lower tiered teams to keep up, but note: that didn’t prove to be the case with the Yurchenko full as of yet. But, for the sake of argument, the following list of skills we’d like to see devalued doesn’t take into account feasibility or affect on those non-top teams.

Gainer Full Beam Dismount
With a plethora of other skills that can be done to get off the beam, let’s mix it up and not have a lineup full of these “easier” skills. We want to see more combinations, more front flips and more harder dismounts after strong routines.

Rudi on Floor
We know is the best way to do difficult front tumbling if you’re not exactly a back tumbling expert, but with so many gymnasts performing this skill, let’s mix it up a bit with different front elements. Add a layout stepout, a combination or even a dance element if you’ve got to do the skill.

Double Tuck Bars Dismount
We know this is already a relatively easy skill that has to be done in combination to get credit, but we still see too much of it. Let’s see some more variety! Even a double pike instead of double tuck would do.

Squat On Transition on Bars
Isn’t it about time we put on our big girl grips and transition from low to high with a “real” skill? And don’t even get us started on roundy-rounds. We all know it’s a safety net for falling on a squat on.

Overshoot to Anything but Handstand
You can keep it as something done in combination but let’s not see them done just for the heck of it. Even better? Pull an Ebee and connect an overshoot to handstand out of your release.

Wolf Turns on Beam and Floor
This one’s pretty self explanatory—the bane of a gym fan’s existence. Maybe devaluing the skill (or at the very least, adding more potential deductions) will cut down on the number we see. While it’s not as prevalent in NCAA as it is in elite, that doesn’t make the skill any better to watch.

Yurchenko Vaults
Maybe not in the near future but eventually, with more and more people competing Yurchenko one and a halves and doubles, it’ll come time to devalue the full to a 9.9, 1.5 to a 9.95 and make DTY the all powerful Yurchenko of the bunch.

Transition-Only Routines on Bars
While some (see Peng-Peng Lee) do difficult enough transitions that we don’t mind, too many gymnasts just do a Maloney to bail and call it a day. Two D-level transitions should not be enough to meet the up-to-the-level requirements, because taking advantage of that rule is just criminal. Routines without single-bar releases should start from 9.95, though we could be persuaded to make an exception for E-level transitions.