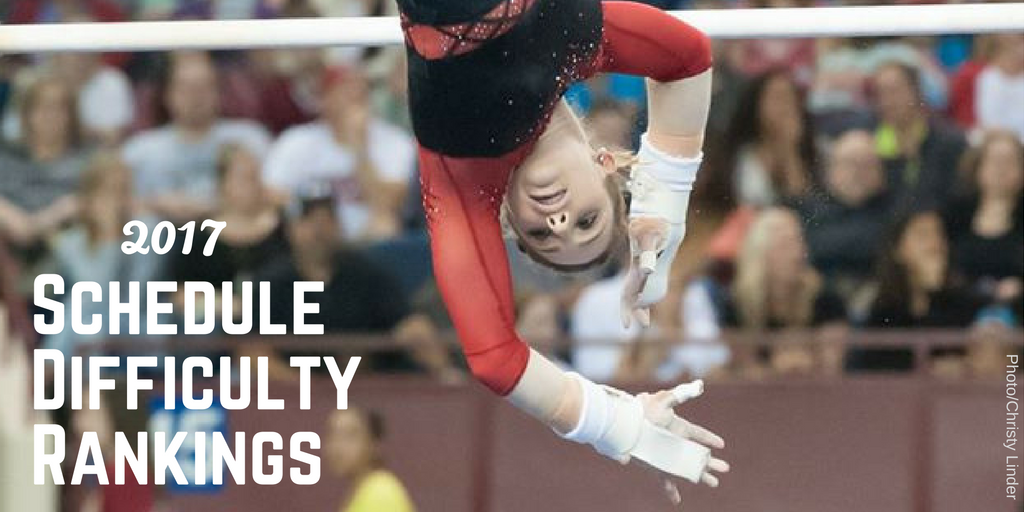 With nearly every schedule having been released — it’s about time — it’s time to see which teams will face the toughest lineup of opponents in 2017. The formula used to determine the rankings is quite simple. Looking at last year’s top 20 teams, we took their 2017 opponents rankings from 2016 and added them all together. For an opponent that was competing at home, we deducted two points to account for “home-floor advantage.” In the case of meets with multiple teams, we treated each opponent separately. Finally, we averaged that number and the team with the lowest average would rank first in schedule difficulty.
​
Confused? Check out an example below.

Now that we understand the process, let’s get into the rankings. Going in, we predicted an SEC team having the hardest schedule due to its tough, “mandatory” in-conference opponents. That turned out to be the case as Georgia ended up with the lowest average opponent ranking. The Gymdogs also had the most difficult schedule in 2016.

Georgia’s low average opponent ranking is due in part to the fact that it will face its toughest competitors on the road. The Gymdogs will travel to LSU, Auburn, Florida and Oklahoma as well as compete in a neutral-site meet against LSU, Missouri and Oklahoma. Four of those five teams were in the Super Six in 2016. But the home schedule isn’t too shabby either. Fellow Super Six team Alabama will travel to Athens, Ga., and the Gymdogs will also square off against top 20 teams Arkansas, Missouri and Utah. Georgia’s lowest-ranked opponent based off last year’s rankings is No. 37 N.C. State with all others under No. 22.

Auburn and Alabama came in close behind with difficult schedules as well, with Alabama facing four Super Six teams while Auburn squares off against five. After that, there’s quite a significant jump to the next-difficult schedule as LSU’s opponent ranking jumps to about an average of 17th place.

In terms of tough conferences, six of the top seven teams are from the SEC (No. 6 Arkansas and No. 7 Florida fall in behind LSU) with the one odd team out being reigning national champion Oklahoma. Utah, Missouri and UCLA round out the top 10.

For full breakdown of the top 20 teams from last season and how their schedules rank this year, take a look at the chart below.