In our next bonus lineup, we tackle the North Carolina Tar Heels! Though this up-and-coming team lost some key seniors in Lexi Cappalli, Josselyn Mackey and Sarah Peterson, they actually win the title for largest incoming freshman class for the 2017 season. With a whopping eleven gymnasts, beating out Oregon State by one, the Tar Heels should expect to have a lot of depth in the coming seasons. But will it be enough?
Vault is one event where UNC should see the most depth. The lineup will return two 10.0 vaults, a Yurchenko 1.5 from Kaitlynn Hedelund and a Yurchenko full-on back pike from Morgan Lane. Four gymnasts, both vets and freshmen, are training some upgrades as well. Junior Maddie Nettles and freshman Mikayla Robinson are training Yurchenko 1.5s. Robinson has been training a tucked 1.5 for at least two years, but from UNC’s Snapchat, it looks like she’ll be laying it out in college competition. Freshman Alexis Allen has previously trained a 1.5, but it’s been reported that she’s downgrading to a Yurchenko half for NCAA competition.
Labrozzi trains another unique vault that could eventually turn into a 10.0 start value. Currently, the most ​difficult vault she’s training is a handspring tuck half, but that’s still only a 9.9 start. A handspring tuck full or a pike half would get her to a 10.0, but that may be something to work on for the future rather than the coming season.

Not as many freshmen, though, will have the difficulty or execution to contribute to the bars lineup. Returning should be Hedelund, Lane, Nettles and Pheil, all of whom scored 9.7 or higher last season. If the Tar Heels really want to be competitive this season, though, they’ll want to up that score, and some of the freshmen are already showing strong sets to work toward that. Gordon not only has a

9.8-worthy. Allen and Labrozzi are also training bars, but footage of their bar training has yet to be seen. North Carolina definitely has some options, but they’ll need to rely heavily on their freshmen if they’re going to boost their bar rotation.

extending her lines in some of her dance elements. Robinson’s powerful back handspring to two-foot layout will be a big hit, as long as she can consistently land it, and Gordon’s excellent split positions and strong acro landings will allow her to make a pretty big impact on that lineup, potentially giving beam star Lane a run for her money.

Floor will see a plethora of contenders for those six lineup spots, only losing Cappalli from the lineup and jumping from one possible E pass to four. Veteran Pheil boasted the lone E pass last season, opening with a high double arabian. Lane also scored well on floor even without the extra difficulty

respectively. Classmate Davis has also trained both a front double twist and a double arabian. The difficulty and execution are definitely there for both Hislop and Robinson, who should expect to make the lineup regularly. Gordon, whose dance skills and clean execution would be sure to be a hit in college competition, is reportedly not training floor. Whether this is due to injury or sheer number of girls contending for spots in the lineup is yet unknown. Allen, Williams and Jamie Antinori are also strong floor workers, though with a stacked lineup like this, they may have trouble breaking in.

In the all around, four of the five veterans who competed last season are likely candidates, with Lane as the front-runner as an AA regional qualifier. Hedelund’s weak spot is her consistency, particularly on floor, and with so much competition, she may get edged out. Nettles may also get lost in the shuffle on floor, and Pheil’s bar scores are the weakest of the bunch. Lane’s weak spot may be bars, but she’s clean and consistent enough to likely serve as the lead-off performer for the team’s event with the least depth. As far as the freshmen go, it’s likely there are just too many of them for any one gymnast to break into the all around. Gordon is the most likely candidate of the class, with a very balanced set of routines. Though she apparently isn’t currently training floor, don’t be surprised to see her pull a spectacular routine out of her back pocket in seasons to come.

That wraps it up for the Tar Heels! Tune in next week to see our analysis of the N.C. State Wolfpack! In the meantime, check out our lineups page and our previous series here. Interested in seeing another team covered? There’s one more spot in our bonus series up for grabs. Who will it be? Leave us a comment or drop us a line on Twitter to cast your vote!

Editor’s Note: This article has been edited from its original publication after receiving new information from UNC coaching staff. This new information has given us insight into the Tar Heels’ training lineups, seeing more routines than expected from freshmen Allen, Hislop and Robinson, and different specialties from Labrozzi and Zhang. These changes are covered more in-depth above.

It has also been revealed that Emma Marchese, who just signed with the Tar Heels for the 2017-2018 season, will be joining the team early this coming January. Lauren Ritter, who had been reported as part of the incoming freshman class, will not be joining the Tar Heels this season. Other roster changes include the medical retirements of Kelsey Chan and Mackenzie Austin, the latter of whom is serving as North Carolina’s undergraduate assistant coach. 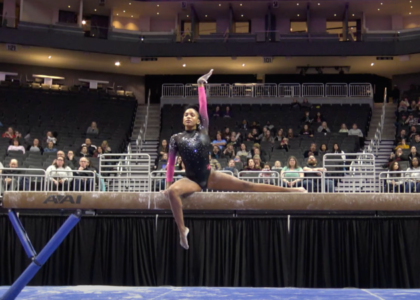