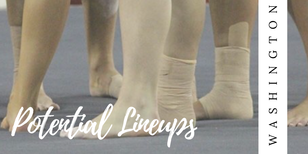 Last but certainly not least, we take a look at the Washington Huskies, who’ve been steadily on the rise the last few seasons. While the loss of their senior, Allison Northey, will certainly affect the team, they will also gain a class of five freshmen that should continue to contribute to the rise of the Huskies.

The devaluation of the Yurchenko full didn’t affect the Husky lineup much, as they used almost all Yurchenko fulls last season. Hailey Burleson, Joslyn Goings, Stephanie Stowe and Alex Yacalis should
ready. Washington local Haley Roy also competes a Tsuk layout half and has been training a full, both of which start from a 10.0. That extra difficulty boost should help the Huskies in the coming season. Bars was a strong event for Washington last season, and with the addition of the new class, this season should continue that trend. Burleson, Goings, Kaitlyn Duranczyk, Jessica Nesis and Zoey
strong Maloney to bail to handstand combination. Any one of them could make the lineup, which ought to light a fire under the veterans, improving their routines even more.​​​ With all the returning routines and strong freshmen, Washington should be very deep on beam this season. Burleson, Duranczyk, Goings, Stowe, Yacalis, Janae Janik and Malory Rose will return beam routines from last season’s lineup. Goings is one of the stronger competitors of the group, with a
Goings, has a triple series and a gainer layout stepout in her routine and has some very fun choreography. Roy competes a difficult back handspring to two-foot layout series and immediately connects it into a straddle jump. Copiak has a wide variety of skills to draw from, including a side aerial to split jump combination, a well-executed switch leap half and a difficult double turn. And Michaela Nelson has some very strong acro elements with her back handspring to layout stepout series and a solid front toss. It will definitely be tight competition for those six lineup spots.​​​ Floor was one of the Huskies’ weaker events last season, only breaking a 49.25 total score (a 9.85 average per routine) once during the season. Washington only had one E pass regularly in the lineup in
and her viral routine last season. She even does the worm! Copiak and Washington can also contribute some more difficulty with full-ins of their own, and new head coach Elise Ray may bring some new perspective on how to choreograph to her gymnasts’ strengths.​​​

In the all around, it’s quite likely that both Goings and Burleson will get the chance to compete all four again this season, even if it isn’t every week. Copiak and Roberson are the most likely freshmen to make a run at the all around. Also keep an eye out for Yacalis, a strong competitor on vault, beam and floor last season. She’s only competed bars once in her college career, and that was a freshman, but now that she’s a senior, it’s possible she’ll try again. If she can make a convincing case and a solid bar routine, maybe she’ll get the opportunity, a la Brandie Jay at Georgia in her senior year.

That wraps up the Pac-12 for us! Come back later next week when we’ll start a series covering the four teams of the Big 12: Oklahoma, Denver, Iowa State and West Virginia! If you’re interested in more on lineup possibilities for next season, check out our lineups page, our SEC series, or any of our previous posts in our Pac-12 series:

Editor’s Note: After time of publishing, it was made known that Faith Morrison increased her academic load and graduated early at the end of the 2016 school year. Therefore, she will not be returning this season.