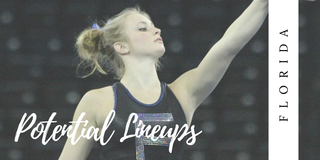 Our next SEC potential lineup analysis takes a look at the former national champion Gators in its second year under Head Coach Jenny Rowland. Florida lost a crucial class this past year in Bridgette Caquatto, Bianca Dancose-Giambattisto, Morgan Frazier and of course, Bridget Sloan. It’s also losing freshman standout Peyton Ernst due to a medical release. However, it’s gaining some fantastic new freshmen and have a lot of depth already built into their lineup, so the Gators should have no problem challenging for the championship again this year.

The Gators are down two vaults from last year’s lineup from Caquatto and Sloan, but this should be no problem to make up. Kennedy Baker and Alicia Boren both return their solid Yurchenko 1.5s, and Ericha Fassbender and Alex McMurtry both bring their Yurchenko fulls to the lineup. Amanda Cheney and Ashley Hiller both made a lineup or two last season with their fulls, and if Lacy Dagen has recovered from injury, she too competes a nice full-twisting Yurchenko. However, it’s really the freshmen that bring the variety into play here. Canada’s Maegan Chant brings a solid Tsuk full to the table, which is rare in the NCAA. In addition, Amelia Hundley, Rachel Gowey and Sierra Alexander all could come out with Yurchenko fulls or 1.5s, and it’s possible Hundley might even break out a double if she’s given the chance.
2015 in a handful of meets and scored decently. However, it is again the strong freshman class that will bring Florida’s bars scores back to where they’ve been in the past. Both Gowey and Hundley have excelled at bars in elite, with almost identical routines leading up to Olympic Trials this summer. Both could have a great effect on the Gator bar lineup.

Beam loses two routines in Sloan and Ernst, and while their elite difficulty and style will be missed, the Gators will be happy to have three elites coming in that can boost them back up. Gowey, Hundley and Chant all have stellar beam routines, boasting high difficulty and great reception on the international stage. The greatest challenge will be finding which skills they can perform most consistently and cleanly and then piecing those together into a full routine. Lineup stalwarts Baker, Boren, McMurtry and Fassbender will also return to the lineup with the possibility of an appearance by McLaughlin.

with powerful and fun routines from Baker, Boren, Fassbender, Hiller, McLaughlin and McMurtry, Chant and Boyce may have a hard time making a splash big enough to merit a lineup spot. However, Boyce will be a senior, so her experience may earn her a spot over someone like Hiller who only made a few lineups last season. But Chant does have two E passes up her sleeve, which Florida could certainly use. All she needs is a combination pass and some sassy music, and she’ll be NCAA-ready.

As far as the all-around goes, Florida’s approach last season was almost entirely centered on its all arounders Sloan, Baker, Boren and sometimes McMurtry. Due to her nagging back injury, McMurtry probably won’t do floor every week, but it’s almost certain that Baker and Boren will return to the all around. On weeks when McMurtry isn’t doing floor, it’s possible that somebody like Fassbender or even Hundley could end up in the all-around, depending on how coach Rowland wants to play with all this depth.

Stay tuned for SEC part five tomorrow as we cover the storied Georgia Gymdogs! Be sure to check out our potential lineups page here and all the previous posts in our series: