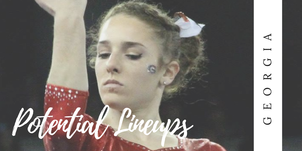 As far as senior classes go, you don’t get more valuable than the one Georgia just lost. Brittany Rogers is now an Olympian again, competing for Canada in Rio; Brandie Jay was a member of the U.S. National Team before college and had perhaps the most diverse and interesting skill set of the Gymdogs; and Mary Beth Box, while a walk-on her first few years, didn’t miss a single beam or floor lineup in her senior season and had one of the biggest personalities on the competition floor. However, the Gymdogs still have some tricks up their sleeves, and they’re adding a few key gymnasts in the freshman class to shake things up.

The Gymdogs will certainly miss Rogers and Jay on vault, as both competed 10.0 start values regularly. However, they still have Gigi Marino competing the Yurchenko 1.5, and Sydney Snead, Ashlyn Broussard, Natalie Vaculik, Lauren Johnson and Beth Roberts can all contribute solid Yurchenko fulls. Snead also completed a stellar one and a half during her J.O. years but was limited last season due to a nagging back injury. Finally gracing the NCAA with her presence after taking a few years off, 2011 world team gold medalist Sabrina Vega has a few vaults she’s capable of. To hazard a guess, she’ll likely start off with a Yurchenko full. But at her peak in elite, she did both the 1.5 and the double, so she could be working toward one or both of those. Jordyn Pedersen, a Canadian National Team member, competes a nice full-twisting Yurchenko, as does level 10 standout Rachel Dickson.
need to work on cleaning up enough to make a lineup regularly in 2017. Hayley Sanders might have spent the 2016 season in exhibition-land, but in 2015 she made one bar lineup, and her routine is killer. She competes a piked Jaeger and a double front dismount, but she needs to clean up a little if she wants the big scores. With the freshmen, Pedersen and Vega are likely to contribute with big skills and clean execution. Vega may need some time to get all her skills back, but don’t be surprised to see her full-in dismount reappear. Pedersen has had some issues with her swing in the past, but her double front dismount and solid Jaeger release could put her in the running for a lineup spot.
contribute. Though she was ill for most of the 2016 season, she frequently contributed to the beam lineup during her sophomore season. So she may again contend for a lineup spot. Pedersen and Vega will again look to contribute with their elite skill set, but Dickson also stands out as a clean, confident beam worker. Her beautiful leaps and clean roundoff-double twist dismount could definitely make her a contender.
dark horse contender for the lineup in the coming season. In addition, freshman Dickson opens her routine with a half-in-half-out and could definitely make an impact. Vega, too, could bring an E pass, as she previously competed a beautiful full-in in her elite years.

With all the options available to her, coach Danna Durante is going to have a difficult decision on her hands with the all-around. Most of Georgia’s returning veterans only competed two or three events last season, so if any of them want to compete all four, they’re going to have to work on their weaker events to clean and solidify their routines. The freshmen, too, could have a shot at the all around with Vega likely having the edge so long as she’s back at full strength.