It’s regionals time! And the teams are set and know where they’ll be going to fight to the death to make nationals. This week Elizabeth ranks who she thinks is in the top 12 teams by Spongebob characters. Which team is bringing it around town like Spongebob and which is shouting, “My leg!”

As always, Let us know who you have in your top 12 and which Spongebob character you think it resembles in the comments or on Twitter. And if you’re a traditionalist, you can check out the official rankings on Road to Nationals.

Oklahoma- Smitty Werbenjagermanjensen​
This is pretty obvious. Smitty Werbenjagermanjensen! He was No. 1!
Florida- Mr. Krabs
Mr. Krabs is all about the money. He’ll do anything for the riches and the gold and the doubloons. Florida is all about winning and big numbers. The Gators will do whatever it takes to take home a fourth trophy in as many years. Even if the methods are kind of sketchy (see SEC results for example).

LSU- Squidward
LSU came into SECs the favorite in some people’s eyes. But the Tigers ended up in third after a fine but not excellent meet. Coming into the championship meet, LSU was Squidward with his clarinet: confident and content. But after? They slipped back down to grumpy old Squidward status and will have to fight back at regionals if they want to show they are a national title contender.

Alabama- Plankton
Plankton always tries to hard to steal that Krabby Patty secret formula but never quite gets there. Alabama, this year at least, looked like it was going to steal the SEC title out from under everyone’s noses once again but came up short.

UCLA- Fred Rechid
You may be wondering who this is. But it’s none other than the guy that shouts, “My leg!” All the time. UCLA is the my leg guy. They bring entertainment to the show but are often hurt (actually more than often hurt).
Michigan- Mrs. Puff
Mrs. Puff is fine and calm and relaxed most of the time just like Michigan is the top team in the conference and Super Six worthy. But there are those times when Mrs. Puff puffs. Just like she explodes, Michigan has a tendency to implode, and mostly on beam.

Auburn- Gary
Gary is the happy-go-lucky snail that’s enjoying being along for the ride (most of the time).He’s also stoic most of the time. Auburn’s enjoying its newfound big girl status in the SEC and is also just enjoying the journey while also trying to not only repeat last year’s success but improve upon it. After last year, the team’s saying, “Yeah, been there, done that.” 💁🏼

Utah- Sandy
Sandy is brilliant and can pretty much do anything she sets her mind to… As long as she has her space suit to keep the air in. But without it, she’s basically useless and reality sets in. Utah’s in a similar boat. The Utes are fantastic in the comfort of their own home, in front of 15,000 fans. But go away and things unravel a bit. Good thing regionals are in Salt Lake City.

Georgia- Spongebob
Spongebob is a great employee, a great friend and a great bubble maker. However, he just can’t seem to pass his boating exam. Just like Spongebob, georgia is great on vault and great on floor but sometimes just can’t seem to get a full hit from top to bottom. Sometimes it’s bars, sometimes beam (most of the time beam). 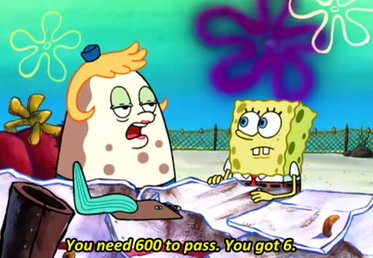 Denver, California, Boise State- Patrick
These teams aren’t Patrick because he’s as dumb as a rock. But just like Patrick never really knows what’s going on, they won’t know what to do if they qualify to nationals because they’ll be in an unfamiliar situation.