Only a couple more weeks until RQS hits the standings full force. It’s bound to shake things up. But this week we’re still using good old averages to figure out who’s No. 1 and who’s… not. But like always, we don’t ever completely agree with the averages. Some teams might have had one off week that’s holding them back while others have had the benefit of home mat advantage to help boost their image. So we ranked the teams ourselves, this time to the theme of elite gymnastics. Which team was a Simone and which was Aly?

As always, let us know who you have in your top 15 and what elite gymnastics figures you think they take after in the comments or on Twitter. And if you’re a traditionalist, you can check out the official rankings on Road to Nationals.

1. Oklahoma
Merely looking at this past weekend, Oklahoma was dominant in competition. Like Simone Biles, no team could stand in the Sooners’ way of winning or reaching some of the top scores in the country so far. Hitting almost-198 not once but twice is a feat in and of itself. Doing it away and home, legitimizes the accomplishment (even if there were some fancy scores being thrown around). The Sooners now need to do the same thing when it counts. World titles are great, but Olympic glory is what even the non-gym fans remember for years to come. 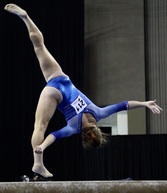 2. Florida
Florida finally showed it’s human this weekend, falling to Georgia after having to count a fall on beam. In the Gators first real opportunity to test the underclassmen in a pressurized situation like an away SEC crowd, the team showed its vulnerabilities. Gabby was the Olympic champion, but is now coming off of coaching changes and working up from the fact that she’s not No. 1 in the world anymore. Once on top of the NCAA gymnastics world, the Gators are dealing with not only a coaching change, but are working their way back up to the top, trying to be the first team to four-peat since the glory days of Georgia gymnastics. But we have full confidence in Florida. If anyone can bounce back from a mediocre meet, it’s the Gators.

​3. Michigan
Michigan has been quite Aly to start the season. Hitting good, solid 196.9s is great, but it doesn’t win you titles. Aly knows that story all too well. Yeah, saying you’re fourth-best in the world is an awesome accomplishment, but you don’t get any hardware for it. Just once, you wish you got the benefit of the doubt and were on the other side of the tie-break. It finally happened for Aly (plus she is Olympic floor champ after all), and last night it finally happened for the Wolverines too, as they notched their first 197 of the season in Monday night’s meet. And it wasn’t just a barely-197. It was a middle-of-the-pack one that included season-high totals on three events, showing Michigan is still here and a threat come postseason.

4. LSU
Maggie Nichols started her elite career under-the-radar. Always a middle-of-the-pack gymnast, Nichols never had the absolute best form or difficulty to challenge with the Simones and Nastias of the bunch. LSU started off rough around the edges. No one really knew what the freshmen were going to do out of the gates and with the superstar seniors gone. But as the weeks have gone by, the Tigers have gotten better and better. And Maggie Nichols got better and better as well as the years passed. She’s a lock on most people’s Olympic teams now. Yeah, there were some bumps along the way (for both LSU and Nichols). But Nichols showed up at the world championships as one of the US’s most solid competitors, and LSU finally had a performance on Friday that showed hope of a championship team.

5. Alabama
6. UCLA
7. Utah
Alabama, UCLA and Utah have all been pretty middle of the pack so far. Each have a low 197 to their names, but each also haven’t had that standout performance yet. All three have all had their shining moment in the past too. Just like Skinner is a third-place world champion, the Tide, Utes and Bruins are all former national title winners. Skinner is always on the bubble of making the team, having the difficulty to do it but also having similar strengths of those that are considered locks. These teams all have one or two standout events, but don’t have the consistency or execution just yet across the board to make a run for the top tier. 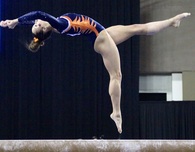 8. Arkansas
9. Auburn
These teams are somewhat underdogs. Arkansas is recently back on the scene, making waves in SEC competition and pushing for a spot in the night session of the conference championships. Auburn also broke out last season and is trying to maintain the success from a year ago. Both teams have had their ups and downs this year, but are fully capable of making the big show in the end. Similarly, Laurie Hernandez is new to the senior elite world this year, but many expect her to be the rookie that spoils the veterans’ party come Olympic team selection time this summer.

10. Boise State
New to the elite coaching scene, Faehn is already impressing gym fans with her poise and willingness to share behind the scenes images from events (who doesn’t love that). We’re already seeing her affect on Team USA, and it’s for the better. Boise State is also a newcomer to the top 10. Holding steady with solid 196s each week, the Broncos are making a name for themselves and proving they can hang with the big guns. Having more and more teams challenge for the top rankings pushes those that have been there for years not to get complacent. If Boise State continues to impress, other teams will have to step their games up and not just coast into the postseason.

11. Georgia
The Gymdogs are 2012 Nastia. Once on top the the college gymnastics scene, Georgia is trying desperately to make a comeback that just isn’t happening. Yeah Nastia made the Olympic Trials just how Georgia upset Florida, but there are still fundamental flaws holding the team back. Just like Nastia had many things standing between her and a trip to London as an athlete. But Nastia found life after the fame, and so will the Gymdogs. They just need to pull themselves together, fix the beam issues and create a new identity that doesn’t involve mentioning Suzanne Yoculan or Courtney Kupets in the same breath.