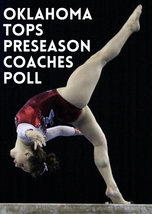 Oklahoma is the No. 1 team in the country, according to the NACGC/W preseason coaches poll released Tuesday morning. In a bit of a surprise, the Sooners topped the rankings, receiving 29 first place votes and 2266 points total. Typically the first rankings of the year follow closely to the previous season’s results. Oklahoma finished third in 2015.

UCLA, Michigan, Stanford, Georgia and Auburn make up the rest of the top 10. The Southeastern Conference has all eight of its members in the top 25 while the Big 10 and Pac-12 conferences each have six.

View the entire preseason poll as well as the other 22 teams receiving votes on Road to Nationals.