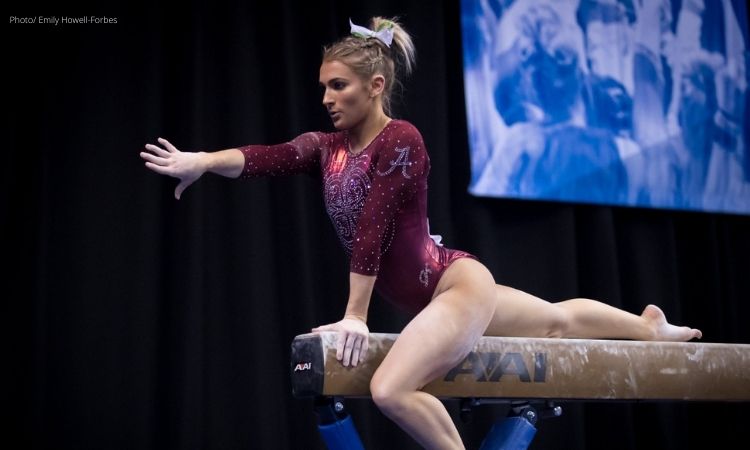 I can’t believe it is Friday Night Heights, and I am sitting down to live blog an actual NCAA gym meet. Someone pinch me, it feels too good to be true. The SEC has some excellent meets on the docket tonight, and this showdown between the Wildcats and the Crimson Tide is flying a little under the radar, in my humble opinion.

Alabama finished 2020 in a great spot, especially considering the number of athletes who were battling injuries by the end of the season. While the Crimson Tide have some ground to make up from the recently departed senior class, they look poised to bring back a plethora of routines from injury. Plus, star-in-the-making freshman Shania Adams makes her debut tonight; while she has the potential to be a key all arounder for the Crimson Tide, she will make the most immediate impact on vault and floor. The last mystery question surrounding Alabama is the return of Shallon Olsen, who had a late arrival on campus after spending the fall training in Canada—it is unclear how much she will be contributing for the Crimson Tide to start.

For Kentucky, the big question will certainly be who will be able to fill in the gaps left behind by senior star Mollie Korth. There has been a lot of mystery around Kentucky this preseason, and I am anxious to see which routines will be making lineups. I will especially have my eye on freshman Isabella Magnelli, who has the potential to shine on each event—especially beam.

Here is a fun stat from the Kentucky media guide: of Kentucky’s projected line up, 33% of bars, 33% of beam and 50% of floor contributions will come from non-scholarship athletes.

Blanco (ALA): FTY, pretty toes. As Kathy said, it’s hard to make this vault look elegant but she does it. 9.800

Nixon (UK): had some technical difficulties – nice routine from Nixon, though. 9.700

Apologies for delayed updates; we are having some technical difficulties here. Hopefully this will improve as the meet goes on.

Alabama has just a tiny lead over Kentucky after the first rotation, after a vault rotation that left some landings to be desired. For Kentucky, both Luksik and Angeny saw a new career best on bars, with their 9.875 and 9.900 respectively.

Machado (ALA): Maloney to pak, some leg separation. Toe-on van leeuwen up to the high bar, finishes with a full pirouette into a double back dismount. That is a jam packed routine, damn.  9.875

Graber (ALA): Comes over on the first handstand, can’t save it, and is off the bars. Geinger looked decent, some leg separation. Bail to handstand good. Looks a little shaky on final handstand but keeps it straight. Stuck her FTDT dismount. 9.300

Givens (ALA): straddle jaeger, clean. Pak salto had some leg separation, but good. DLO dismount with a tiny hop. 9.750

Adams (ALA): Maloney to pak was gorgeous, legs totally together. Van leeuwen also very nice. Just a tiny step on the double back dismount. 9.875

DAMN this meet is close, you guys. I knew this would be a fun meet and it is living up to my expectations. Absolutely stellar bar routines from Adams and Doggette for the Crimson Tide, and a new career high for Nixon on vault for the Wildcats.

Alabama needs to keep it together on beam in order to get the edge back, which isn’t always the easiest ask, especially considering floor should be a strong event for Kentucky.

Klopfer (ALA): wolf turn, solid. front aerial into BHS, good. beat jump to split half, hard to tell if she hit 180 there. cat leap into a side aerial. RO 1.5 dismount, tiny hop on the landing. Solid start for Alabama. 9.800

Bunn (UK): Double pike to start, small step. Back 1.5 to a front pike for the second pass, solid. Rudi to finish, lets a little sloppy, not a controlled landing. 9.750

Hagis (UK): Rudi into back LOSO, that’s kind of fun. Nice leap series. Good height on the double pike, bounced out of it a little bit – looked a tiny bit short on the landing. 9.875

Gaskins (ALA):  in for Graber. Side aerial to beat jump, nice. Full turn, balance check. Beautiful position on a Y hold. Split half was great. BHS LOSO, came off. Switch to split, nice. Gainer full dismount. 9.175

Adams (ALA): Big balance check on her front aerial. BHS LOSO, looks a little uncontrolled but covers it. Solid double wolf turn. She seems to be getting more confident as she goes. Beautiful switch leap. BHS 1.5 dismount, stuck. 9.775

Davis (UK): Double pike with an uncontrolled landing to start. Gorgeous, super high leaps. Very nice second pass, lots of height she practically floats out of it. Double back to finish, big bounce back. 9.875

Worley (UK): Big double pike to start, controlled landing. She’s capable of a piked full-in here. Switch leap, nice. Front full to front lay was lovely. Finished with a double back, stuck, damn. This will be a good score. 9.900

THIS. IS. SO. CLOSE!!! I am on the edge of my seat. That was a strong rotation for both teams, with Kentucky introducing FIVE new floor routines. Alabama recovered nicely after a fall from Gaskins (who subbed in last minute for Graber) and finished with a beautiful routine from Doggette, who notched the fourth career best of the night.

Harman (UK): BHS BHS LOSO, and she comes off. That’s too bad. Switch leap to gainer LOSO, I don’t think they will give her the combination though. Gainer tucked full dismount. I’ll be curious to see what they do with that, score wise. 9.050

Klopfer (ALA): Opens with a double tuck, fights to keep that front foot down in the step back. Little short on her leap series. Back 1.5 to front layout. Finished with a double pike, very controlled. 9.850 – new career high

Mitchell (ALA): Big double pike to open, landing looks a little uncontrolled. Switch leap, wolf, wolf 1.5 – that’s unique! I like it. Finished with a punch front through to a double back. 9.850

James (ALA): LOVELY to see her back after her achilles injury last year. Front layout to 1.5, nice. Nice leap series. I absolutely love how dramatic this music is. Finishes with a double back, controlled landing. 9.800

Gaskins (ALA): Double pike to start. Pretty Y turn in her dance series. Switch ring, switch half, looked good. Punch front through to double back, lands short and her hands almost completely come down – I don’t think she touched the floor though. 9.025

Worley (UK): Missed the first part of this due to some technical issues, but I’m back. Front aerial to BHS LOSO, nice combination. Full turn nice. Finishes with a RO 1.5, stuck. 9.775

WOW they took off one-tenth from James because she didn’t salute the judges.

Graber (ALA): Opens with a full-in, very nice. She came down weird on her first leap, it almost looked like her ankle buckled, but she covered well. Punch front through to a double pike, excellent. 9.925

Adams (ALA): Double pike to start, good controlled step. Looked slightly off balance on the leap series. Huge 1.5 to layout, so much height. Wow. Big double back with a tiny hop to finish. Well done.  9.850 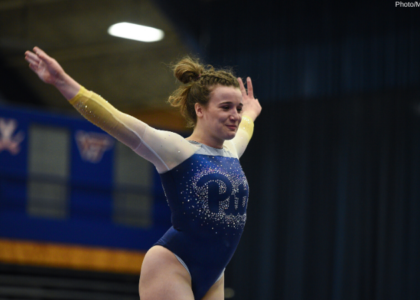 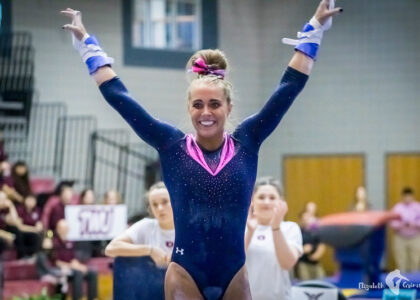 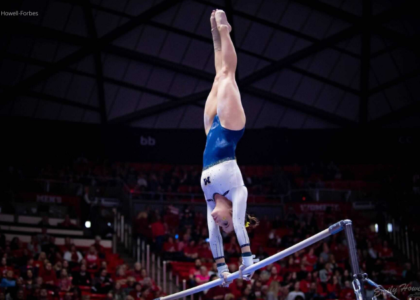