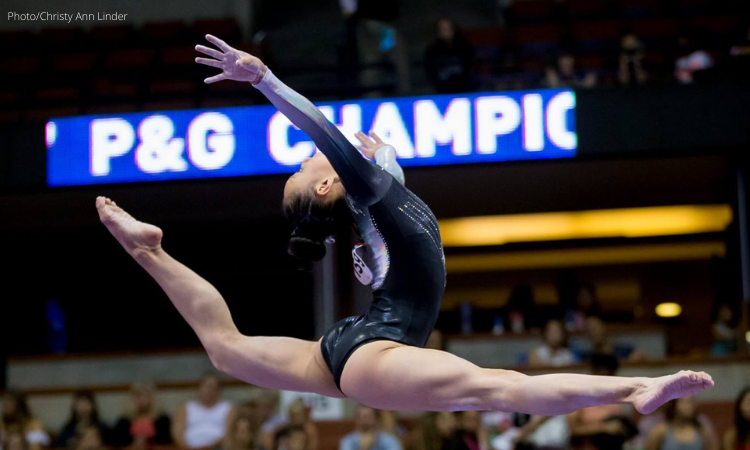 After celebrating the top-rated gymnasts in the class of 2022, it is now time to talk about the insanely talented class of 2021. Perhaps unsurprisingly, given that this class includes most Olympic hopefuls, a lot of the top gymnasts are current elites. They tend to be committed to top schools, with Florida and UCLA having three 5-star recruits each. Collegiate choices, however, get more diverse and exciting when we look at level 10 commits. Such underdog schools as North Carolina, Michigan State and Missouri will be delighted to welcome one 5-star recruit each. Finally, CGN’s top rated gymnast, Leanne Wong, is still uncommitted, which makes next week’s signing day all the more exciting.

The 2019 level 10 national champion (junior E) is ready to take Ann Arbor by storm. Her routines are solid, her form is consistent and clean on all four pieces and her Yurchenko 1.5 will challenge Natalie Wojcik’s. Every year Michigan seems to produce a new star, and Vore is next in line.

Celestine is a hugely talented all arounder who stands out particularly on vault, bars and floor. Her full-in on floor and van Leeuwen on bars are beautifully floaty, and her Yurchenko 1.5 is probably the best in the country.

Schulte will bring tons of difficulty to East Lansing: She opens her floor routine with a big full-in and dismounts beam with a double tuck. Her Yurchenko full has the potential to score into the 9.9s.

Neault marries difficulty and execution beautifully. Her bar and beam work is particularly exquisite. On bars, her Maloney to Pak salto is floaty and her double front dismount is difficult. On beam, she performs a triple series and a double tuck dismount. We’ll hope to see some of that difficulty in college!

What an incredible addition Dekanoidze is going to be for Carolina! Her Yurchenko 1.5 on vault and her exquisite bar work in particular will have an immediate impact on UNC’s lineups. Her difficult floor routine and beautiful choreography will also make her a fan favorite.

The 2017 and 2019 world silver medalist on vault is known in elite for her power, and hence for her vault and floor performances. However, she also has stunning form on bars and lots of potential on beam. She will be expected to become an all around standout for the Beavers. Technically, she’s already on the roster at Oregon State, but she won’t compete for the first time until the 2022 season.

Eaker is known internationally mostly as a “beamer,” but don’t be deceived. Her form is exceptionally clean on bars and floor as well, and her Yurchenko full could score a 9.950 almost every week in college (but she has a one and a half, too). She will shine in the Huntsman Center!

The 2017 world all around champion caught everyone’s attention in 2014 in her pre-elite days when she performed stunningly clean routines at the Nastia Liukin Cup. Her clean form, together with her difficult gymnastics, is what will make her an NCAA star.

The 2019 world bronze medalist on bars was rated a perfect 25 on her pet event and for good reason: Her form is perfect even when she competes some of the most difficult skills in the world. Her potential is also immense on the other apparatuses, particularly on beam and floor. She could become Auburn’s ultimate star.

Malabuyo, who deferred her UCLA debut, is a well-balanced gymnast with clean form on all apparatuses. She is prone to injuries, but if healthy, she will be a force to be reckoned with.

Chiles presents clean form on all four pieces but has recently also become very consistent, which is key to NCAA success. Her Yurchenko double is one of the best in the country—hopefully we’ll get to see it in college.

Lee is perhaps the lesser known of the future Bruins, but fans will quickly get acquainted. Her gymnastics is clean, her beam work is exquisite and she will challenge the more famous elites for lineup spots.

McCusker has stunning lines, which stand out especially on bars and beam. She will probably contribute the most on these two apparatuses, though she also has a lot of potential on floor. Florida’s lineups are going to be insane in 2023, but she will easily challenge for the anchor spot on bars.

Jones’ gymnastics was born for the NCAA, and we can’t wait to see her debut. Her double-twisting Yurchenko is outrageously good, and we hope that she will anchor the lineup à la Alex McMurtry… Or be even better!

CGN’s top-rated gymnast—and the only athlete to score over 90 points—is practically perfect on everything she does. Will she become the second-ever collegiate gymnast to score a perfect 40?

The Canadian has the potential to become an excellent NCAA gymnast. Her form is clean, and her bar work is exquisite. Her elegant choreography stands out on floor, and so does her unique first tumbling pass: a front pike to 2.5 twists.

Skrupa, another Canadian, struggles a bit on vault and bars, but she is a very good beam and floor worker. On floor in particular she competes two E tumbling passes—a lovely double Arabian and a full-in, which will be of interest to many NCAA coaches.

READ THIS NEXT: Breaking Down the Top Rated Gymnasts in the Class of 2022 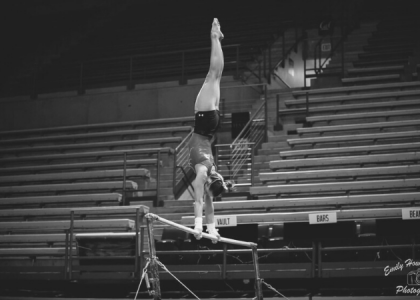