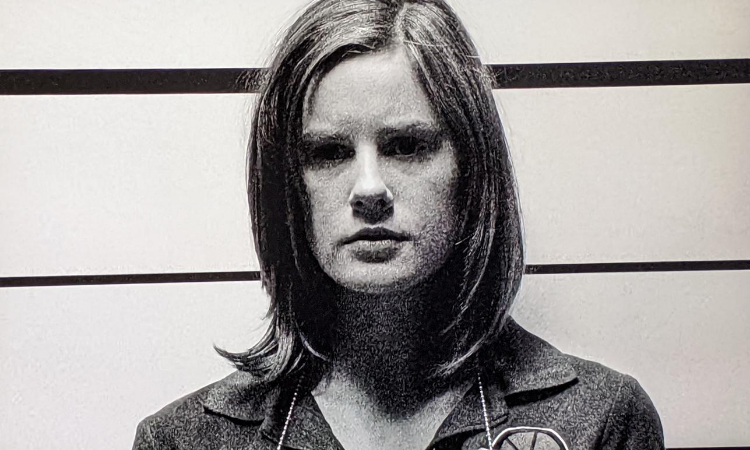 So, Emily’s in jail. 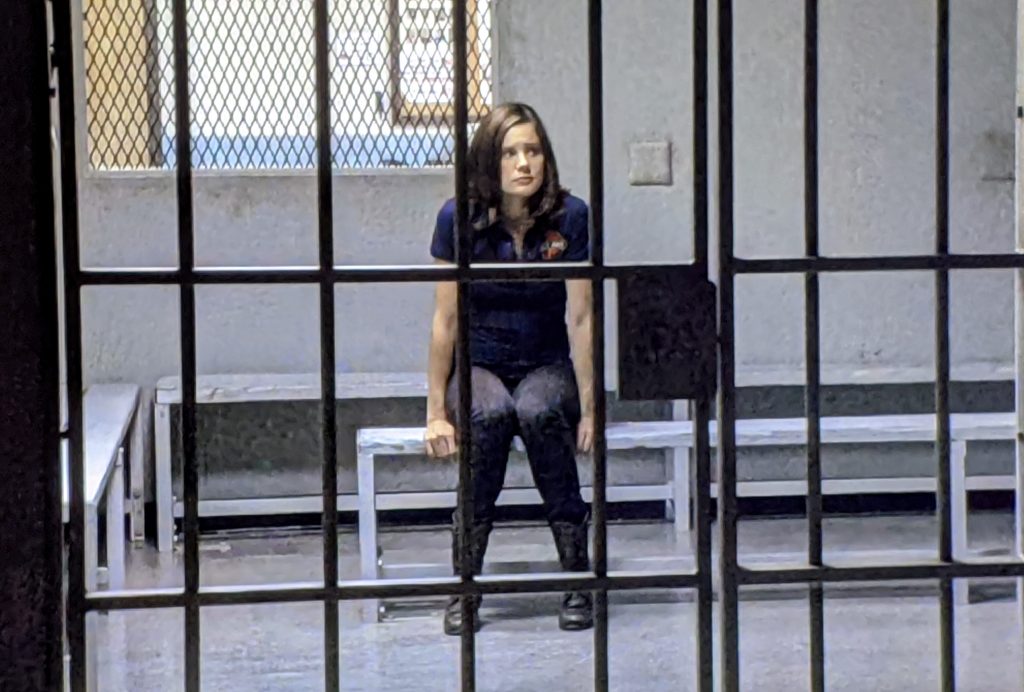 ICYMI, she was arrested at the end of episode 8 for stealing Brian’s $2,200 anti-seizure medication that they couldn’t afford. (Excuse me while I go scream into a pillow about the U.S. healthcare system.) She’s using her one phone call to Razor to bail her out. Since she’s a minor though, they will only release her to a legal guardian. The police finally get ahold of Chloe, who was at her new job at “the emergency… phone call… answering… place… Don’t try to change the subject!”

Emily and Chloe start fighting, and Razor reminds them that anything they say can and will be used against them in a court of law, so maybe this isn’t the time or place. 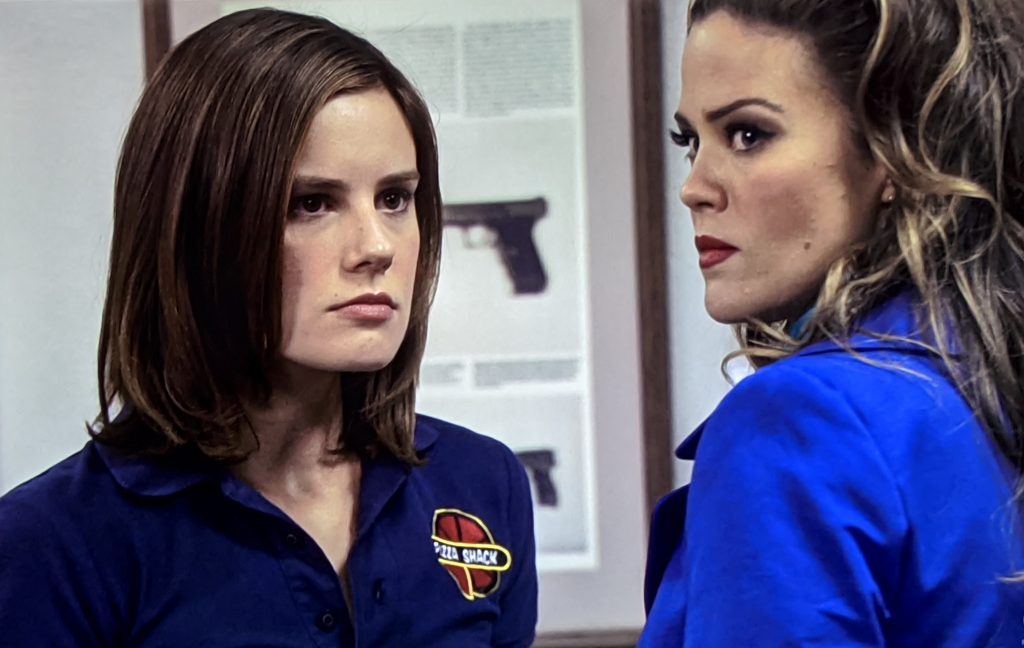 Ronnie brings Kaylie breakfast, noting that Kaylie barely touched her dinner last night and must be starving. She says, “I’m the best gymnast in the country. Would I be able to do all this if I were undernourished?” Ronnie’s like, “Good point!”

Kaylie immediately throws all the food in the trash.

Payson is (rightly) freaking out because she kissed Sasha. Kim is trying to convince her that it’s not a big deal (except it is), and Sasha is a classy gentleman who will handle it in “the best possible way.”

Apparently, Sasha called Kim immediately after the kiss and told her what was up, so that’s good at least. Kim thinks it’s hilarious and something they’ll all look back at some day and have a good chuckle over.

Steve is dropping off Lauren at the Rock. He’s taken her car away because he’s still pissed about her “having sex with that mop-haired air brain in the meditation room.”

Honestly, he seems more upset about her sacrificing extra gym practice than the “having sex” part.

Lauren claims he “ruined her life” when he broke up with Summer. Uh… Wasn’t she already sleeping with Carter before they broke up and didn’t she spend most of their engagement trying to break Steve and Summer up?

Lauren walks into the gym and sees the training camera still set up. Because she loooves to push buttons, she watches the most recent recording. 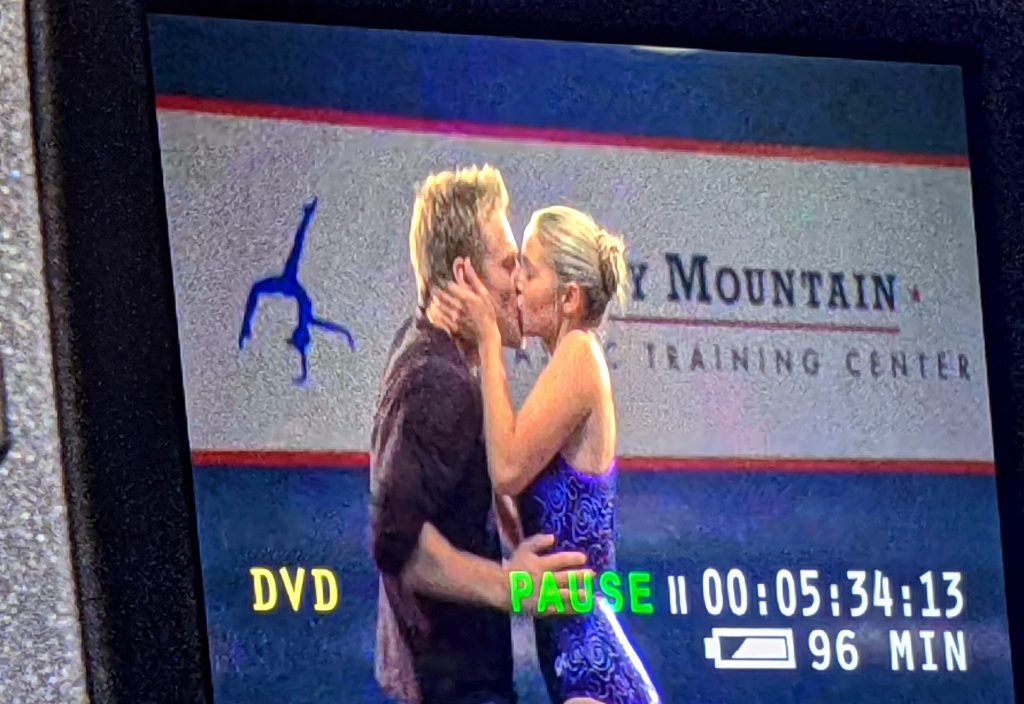 After stealing the DVD for later (because obviously she’s going to do something nefarious with that footage), Lauren mocks Emily because Steve Tanner dumped Chloe. Emily actually tells her to shove it, which I’m into.

Payson’s avoiding Sasha, which I totally get. He asks Kim how he should deal with it. She recommends the three of them sit down and just talk it out. Yeah, OK, there’s a plan…

Summer has been conducting a straw poll for the parents’ board presidential race on Kim’s behalf, and has the receipts to prove it.

They agree that Kim has to schmooze Alex Cruz in order to beat Steve Tanner, who will almost certainly hand over the Rock to that absolute demon, Ellen Beals. Kim says she’ll do it even though she’d rather cover herself in paper cuts and jump into a vat of lemon juice.

Kaylie is winded after her beam routine, and Sasha is concerned that she’s still losing weight. She says, “Ellen Beals thinks my diet and training schedule are perfect.” 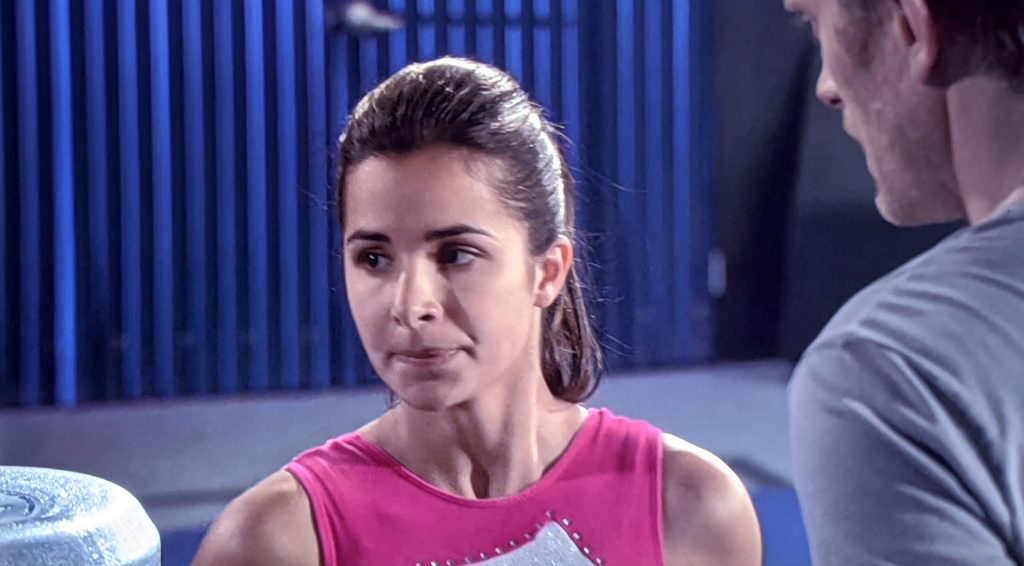 Oooh, Lauren’s mom shows up at their house! She begs Steve to let her see Lauren because she’s sober and his “nasty threats” aren’t going to scare her away any more. Steve reminds her that he still has a restraining order out against her and she’s a “pathetic loser who chose drugs over her own family. Twice.”

He says if she tries to see Lauren without his permission, he’ll have her arrested. She says, “You’ll regret this.”

Chloe and Emily are talking about what a mess her life is when Damon drives up in a brand new BMW. She says, “You’re such a rock star in your fancy car and skinny jeans and funky T-shirt.”

He’s got a record deal and is on his way to L.A. to record his debut album. “We’re both on our way to the top of the world.” I’m sorry, does no one on this show understand the concept of a jinx?!

Kim, Sasha and Payson have their little meeting. Payson does all the talking, declares henceforth everything shall return to normal and then leaves.

Lauren asks Summer if she can come over for dinner “like old times.” Summer reminds her that it’s not like old times, and admits she’s seeing Sasha. Lauren flips out and says, “You were basically my mother. How can you dump my father for my coach?!” Like… None of those things are correct?

Lauren’s actual mom is hiding in the parking lot and sees her run out in tears, but stays away lest she get arrested.

Emily swings by Pizza Shack to complain to Razor about how inferior she feels to Damon. She begs him not to say anything.

Lauren is out for blood. She’s sitting in her bedroom editing the video of Payson and Sasha to look as compromising as possible, then promptly sends it to Ellen Beals.

Kaylie is exercising (because of course she is) when she’s interrupted by her parents and Sasha.

Alex tells Kaylie to get on the scale because Sasha’s being histrionic and she needs to prove him wrong. It says 106, her target weight. Alex is very indignant and tells Sasha to GTFO. After they leave, we see that Kaylie actually weighs 96 pounds.

Emily and Damon are having a fancy dinner, but he senses something’s wrong with her. She confesses that her big gym scholarship was made up by Steve Tanner. Damon’s like, “So? Why wouldn’t you keep the money anyway?” Emily’s like, “You just don’t understand…” 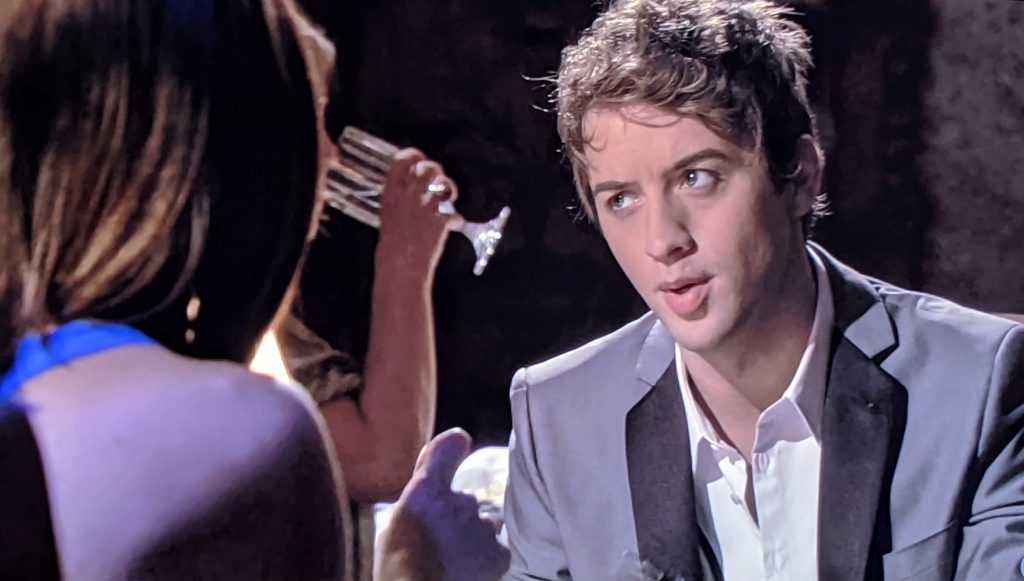 But wait, there’s more! “Razor gets it. Also, we’re both losers working at Pizza Shack together.” She says she needs some space and leaves.

Steve drunk dials Chloe and says he misses her even though they can’t be together because she’s trash but that he hopes she’s doing well.

Meanwhile, Chloe is getting dressed for work. Told you she wasn’t working in an office!

Chloe’s on her way out the door but notices Brian’s sad. He blames himself for Emily’s arrest. Chloe reassures him that it’s actually all her fault, but that she’s making great money at her new, regular office job.

Sasha’s working with Payson on her choreo, and it gets awkward because he doesn’t want to touch her. She gets embarrassed and runs away. He follows her and reassures her that everything is fine.

He tells her about his dad/former coach—”who will never forgive me for winning a gold medal for England instead of Romania—and the coach he replaced him with, Nikolai, who pushed him and loved him. He says, “If he’d been Nicolette, I would have kissed him, too.” 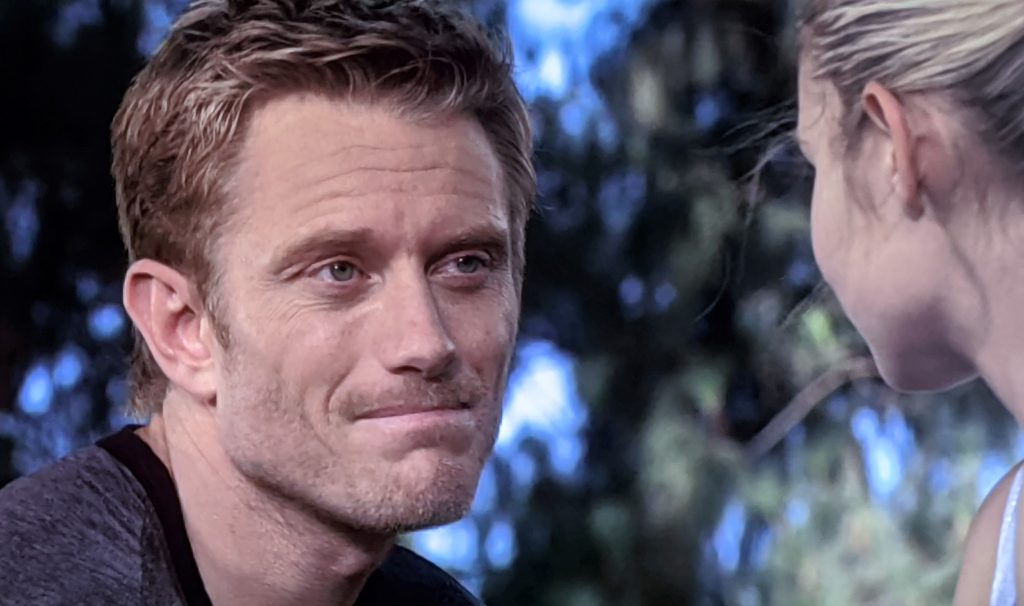 Kim is trying to convince Alex to vote for her, and she hates it so much. 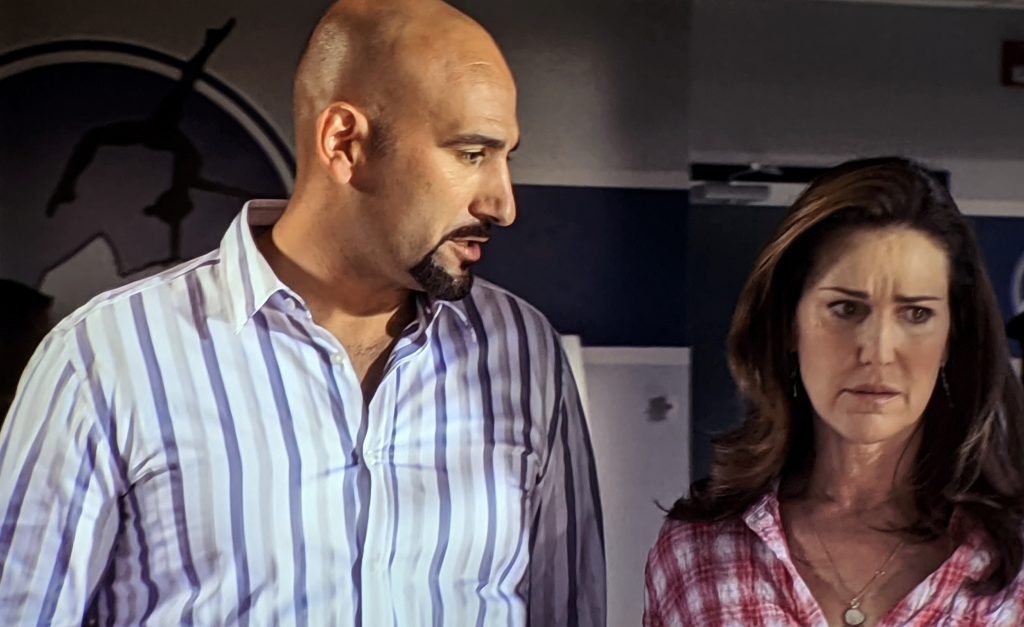 Emily tells Razor that Damon just doesn’t understand and everything is awful blah blah blah. Razor points out the irony, since this (i.e., not accepting money because he didn’t want to become a sell-out) is exactly why Emily got pissed at Damon a while back. 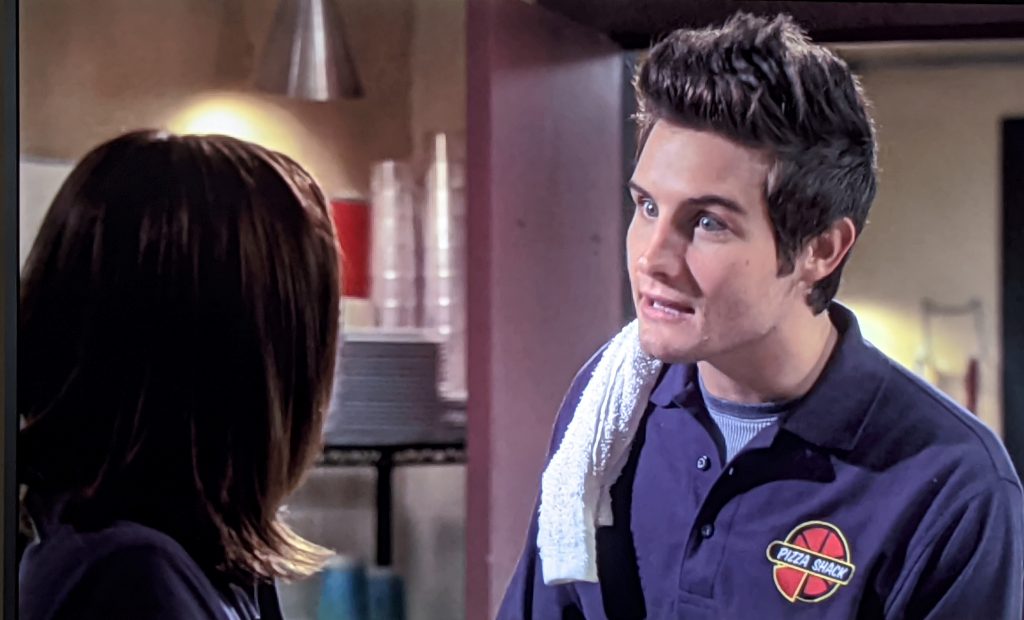 Damon walks in as they start having a giggly food fight.

At the Rock, Steve and Kim are giving their final speeches to the parents’ board before the vote. Steve Tanner goes full on Godwin’s law and calls Sasha “the Führer.”

Kim does NOT compare Sasha to Hitler, and says that while she personally supports Sasha, it’d be her job to listen to everyone and act in their interests. Alex Cruz stands up and endorses Kim, followed by Chloe and Ronnie.

OF COURSE, Ellen Beals saunters in right on cue and says she has some relevant information about Sasha engaging in “disturbing misconduct.” Kim calls out Ellen for being a manipulative asshole, so she pulls out the edited pic of Payson kissing Sasha that Lauren sent her. She also says it’s Kim’s fault for covering it up.

Ever the opportunistic dirtbag, Steve Tanner moves to vote for president right then so they can deal with this dreadful issue.

Kim comes home and tells Payson about Ellen Beals torpedoing both her campaign and Payson’s reputation.

Steve Tanner is bragging to Lauren about his win and how, “I’m sure I would have won anyway, even if Ellen hadn’t shown up and sabotaged Kim’s chances.” Uh huh… Lauren says, “I bet Summer will dump Sasha now!” and they decide to go to Le Privilège to celebrate their evil plans coming to fruition. JFC, those two deserve each other.

As Lauren’s getting ready, Steve gets a really bad phone call: Lauren’s mom was killed in a car accident (she wasn’t at fault). 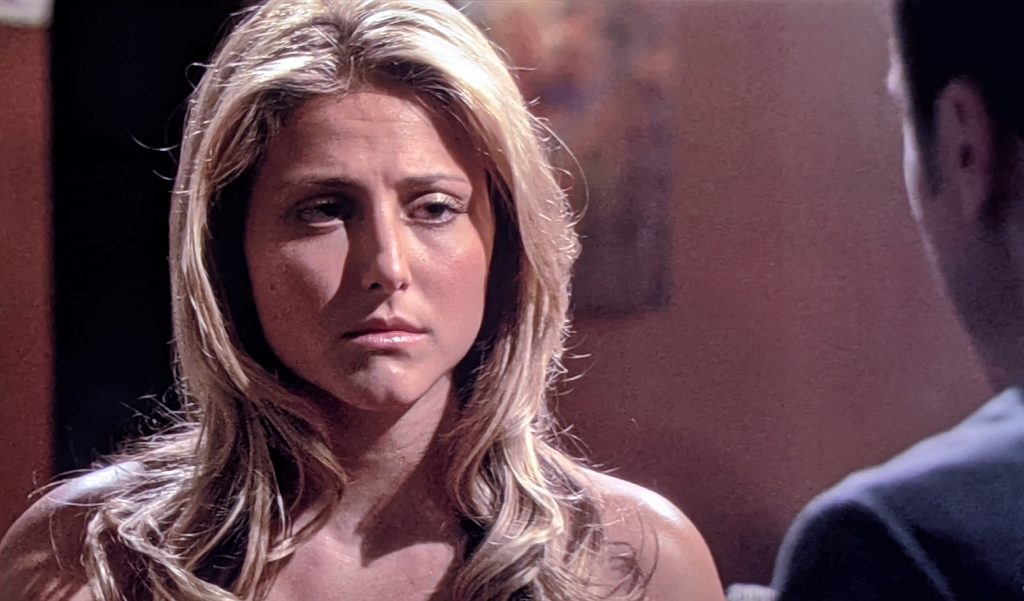 Lauren claims to feel nothing. “She stood me up at Nationals, so why should I care? Can we please go to dinner now?”

Ronnie goes into Kaylie’s room while she’s sleeping and finds her training bag filled with days of her uneaten food.

Damon and Razor have a heart-to-heart. Razor tells him to lay off Emily and let her have a little fun, pointing out that they were supposed to leave each other alone until 2012. Later, Emily tries to apologize to Damon, but he preempts her apology with one of his own, telling her he should have given him space and that she can date Razor if she wants

Summer tries to comfort Sasha for the shit show that’s about to rain down on him, saying, “I can’t believe even Ellen Beals would sink this low.”

Sasha’s only worried about how Payson is going to handle things. Summer reassures him that she’s strong, she’ll be fine.

Realer My Hatred of Ellen Beals

Death, heartbreak and Ellen Beals. I’m sure all these dreary plot points will pay off, but this episode was a major buzzkill.