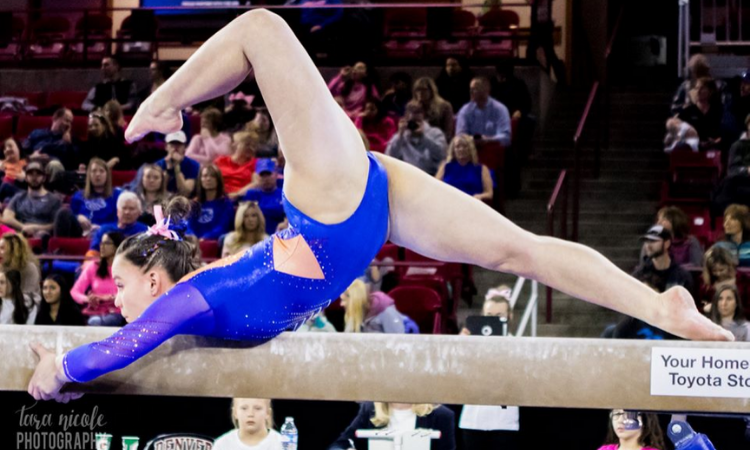 Welcome to the Battle of the MRGC heavyweights! (For the uninitiated, the MRGC is four team conference of respectably ranked teams that most people think are either in the Pac-12 or Big Ten: BYU, Boise State, Southern Utah and Utah State.)

While both teams are coming off season high performances last week, BYU’s 197.075 against Southern Utah is its highest total since 2004 and solidifies its status as the MRGC team to beat. However, you can never count out Boise State. Despite securing a season high team score and its first win in 2020, head coach Tina Bird noted that she doesn’t believe the scores “truly reflected our performance.”

This is a sneaky-significant meet: BYU has spent the last decade climbing its way back into the top 20 since bottoming out at 50th in 2009; it’s currently ranked first in the MRGC and 15th nationally. Boise State—after a lackluster start and a season-ending injury to leading scorer Courtney McGregor—finds itself third in the conference, an unfamiliar position for a team that’s led the MRGC since its inception in 2014. This match-up will either formalize a changing of the guard or reestablish the old world order.

Okay, NO NO NO! When I said I hoped we’d see some gymnastics soon, I did NOT mean show a replay of Courtney McGregor’s season-ending vault. Come on…

Apologies, I’m having some issues with the stream freezing and missed several routines.

Beeston (BYU): Clear hip to handstand, nice. Geinger with some leg sep to bail. Good last handstand. Pikey DLO with a hop back. 9.650

Otuafi (BSU):  Yurchenko half, flipped really close to the vault. 9.775

Alvarado (BYU): Nice low bar handstand. Maloney with some leg sep, very nice Pak. Overarches the half pirouette. Slight pike on the DLO, but a stick. 9.825

Bouza (BSU): Yurchenko full, nice position in the air if not a ton of amplitude. Good landing, tiniest step forward. 9.850

Cyrenne (BYU): Her usual straddle after the Maloney. Good bail. Some feet and pike on the DLO with a hop back. 9.800

Smith (BSU): Yurchenko full, a little arched then piked to compensate, large slidey step back on the landing. 9.700

Bruden (BSU): Yurchenko full with great distance and power, but a little pike/chest down and huge hop back. 9.700 is too high (especially compared to Smith’s)

Both teams got the benefit of the doubt on a couple of those scores, but more-or-less what the event totals should be (at least in the same neighborhood). I know vault isn’t Boise State’s strongest event, but they’ve got to strike a balance between “practically landing on top of the table” and “landing off the mat.” BYU’s bars didn’t look quite as sharp as we’ve seen in recent weeks, but a serviceable rotation with no major breaks.

Yay, McGregor’s there on her knee scooter cheering her team on!

Mathews (BYU): Excellent Yurchenko half with a minor (Miner?) hop to the side. Great height and distance, perfect body position. 9.850

Evans (BYU): A little short on her Yurchenko half, has to take a step back. Really nice body position and flare out, though. 9.800

My main takeaway so far is that there isn’t enough differentiation between scores. Le sigh. BYU’s vault variety remains a lot of fun to watch, and they performed well. Their blocks and form in the air really stand out. Meanwhile, Boise State continues to impress with their five-gymnast bars lineup; not only where there no disasters, they put up five very good routines (three of which scored 9.725, but I digress…).

Stainton (BYU): Round-off to double pike, well done. I don’t have sound, so this choreo out of context is amazing and awkward. full to Barani to split jump, some soft knees. Switch split to switch full, good enough. Nice round-off double tuck to finish, love the pointed toes in the first salto. 9.725

Vitkauskas (BYU): Front double twist to open, one of the better I’ve seen her do. Front full to front lay, excellent. Hitch kick, fun. Switch side to Popa, good. Sassy hip pops. Punch Rudi to finish. One of the cleaner and more precise routines she’s done. 9.825

Elkabachi (BSU): Scorpion. Really pretty full turn. Bhs loso that she rebounded from and somehow stayed on. Cat leap to side aerial with a leg up; again, what a save. A little shy on her switch split leap, but good straddle quarter. Really good Barani. Straddle half, well done. One and a half dismount with a nervous-looking step. She held it together well. 9.400

Pearson (BYU): Painful-looking landing on a not-quite front double full. Switch ring very short. Fhs Rudi good, but a little muscled. One and a half to front lay, easily her best pass. 9.750

Amado (BSU): Bhs bhs lay-pike hybrid. Aggressive switch split to straddle quarter, slightly shy. Front aerial with a little hip check. Love her high kick. STUCK one and a half with some leg form. Nice routine, but 9.900 is generous

A. Miner (BYU): Solid DLO to open. Good amplitude on her switch full series. Didn’t get a great punch from her one and a half, so front lay was kind of crunched. Very nice double pike and Simone butt-bounce to finish. 9.850

Muhlenhaupt (BSU): Lovely bhs loso, great extension. Kicks out of her full turn. Switch split to split to sheep, well done (small hip check after the sheep). Side aerial that she finesses out of. One and a half with a tiny hop. 9.875

Evans (BYU): Double pike with chest down, but stuck. Floaty front lay to front full. Switch full to wolf full, nice positions. This choreo is even more amazing and awkward without music. Feed hung up. Looks like she got stalled on the double tuck and had to take some steps on the landing. 9.800

Props to Boise State for salvaging a decent 48.525 on beam after a rough start. The precision just wasn’t quite there tonight (whether that’s a result of nerves or technique, I’m not sure), leading to lots of wasted tenths. BYU was fine on floor; I’ve seen them look better and I’ve seen them look worse. Glad to see Evans back in the rotation.

Mather (BYU): Hitch kick to side aerial to beat jump, good. Bhs loso with a big bilateral hip check, but saves it. Switch split with a stutter, straddle quarter. May not get the connection credited. Cartwheel gainer full stuck. Solid start for the Cougs. 9.725

Smith (BSU): Pretty double pike to start. Really nice dance, love her carriage. One and a half front lay, well done. Switch full to Popa, good position. Really tight double tuck, lands crunched and has to stumble out of it. 9.500

A. Miner (BYU): Nice split jump. Balks her acro series, I think? Hitch kick to front toss to bhs, no problem. Beat to switch 3/4; cheats it a little and doesn’t quite hit 180. Carthweel to stuck gainer full, nicely done. 9.825

Elkabachi (BSU): A little out of control on her two and a half; maybe went OOB? Great amplitude on her switch side to Popa, but a little off horizontal. Double pike, chest low and has to take a step. One and a half to front lay, stutters into the lunge, but pretty body position in the air. 9.550

Cyrenne (BYU): Bhs loso, way off and she hops down. Switch split to switch half to wolf, feet on all three. Long prep before a gainer pike. Goes up on her toes but stays in place. 9.300 is too high (even with a fall)

Nilson (BSU): Fhs Rudi, a little bouncy but stays in bounds. Switch half to Popa to straight jump full, good. One and a half to front lay, has to bend the knees to stand it up. Low double pike and has to take a step forward. 9.525

Stainton (BYU): Front toss, well done. Over-rotates the full turn. Switch split to split quarter with a leg-up check. Some soft knees, but sticks the one and a half dismount cold. 9.750

S. Miner (BYU): Bhs loso, no problems. Switch split to straddle quarter, great positions. Hitch kick to side aerial, excellent; I like that she finishes every position. Another soft-legged but stuck one and a half. Great routine. 9.850

Evans (BYU): Fab bhs loso. Hitch kick to front toss with a big hip check. Switch split to straddle quarter, well done. Bhs one and a half with a hop to the side. 9.775

Popp (BSU): HUGE double pike, tons of hang time. Switch half to Popa, good positions. Off on the one and a half and she sits a front tuck, ugh. Short on the double tuck and bounces forward. Too bad.

Tough floor rotation for the Mustangs. Honestly, they looked gassed, just couldn’t seem to find any sort of momentum. Again, BYU didn’t look as sharp on beam as we’ve seen them this season, but staved off disaster after an early-rotation fall. They’ll happily take a well-earned 196 away score and official status as The Team to Beat in the MRGC.